Round 8: Zvi Mowshowitz vs. Jeff Cunningham

There are few people as recognizable on the Pro Tour as Zvi Mowshowitz. And of course, it being Extended, Mowshowitz is with his patented Turbo Land. While he always insists that his is the deck to beat, this time around he might be right, sitting pretty at 7-0. Joining him there is Canada's Jeff Cunningham. They may have laughed at his OBC tech in Houston, but it carried him to twenty-sixth. Now it's tearing up PTQs across the world, and he's 7-0 with it here.

Cunningham won the die roll and started with a disappointing Careful Study that shipped two islands to the graveyard. Mowshowitz was surprised and delighted. Cunningham's turn two was an Aquamoeba. Mowshowitz's forest geared him up for Moment's Peace, and now Cunningham was in trouble. He madnessed a Rootwalla at end of turn, and an Arrogant Wurm in his attack. Sure enough, Mowshowitz had the Peace.

He untapped and slammed down Oath of Druids. Cunningham smashed in for ten, but it was looking like the last damage he'd deal this game. Mowshowitz slowed the game down, Oathing up a Scrounger and playing the Peace from his graveyard, then Oathing away his whole deck and setting up his draws with the Scrounger. Another Peace in hand locked things up tight.

Cunningham played it calm while Mowshowitz went through the motions. One turn, operating off his stacked library, he tapped two and Gushed. Then he immediately realized that he had no use for the mana. He went for a desperation Time Warp, tapping almost all the way out, but Cunningham had no counter to punish him. From there, not even another minor error could do more than irritate him. He won with ease, setting up Time Warp recursion to Capsize all of Cunningham's permanents, intending to kill with the Scrounger. Cunningham accepted this plan, and they were on to Game 2.

Cunningham opened with Basking Rootwalla and Wild Mongrel. Mowshowitz answered with Exploration and Oath of Druids. Cunningham was stalled on two forests, but he had Ray of Revelation in hand to shut down the Oath. Mowshowitz had another, and a Scroll Rack besides. Cunningham's troops brought him to ten, madnessing an Arrogant Wurm, courtesy his third forest. 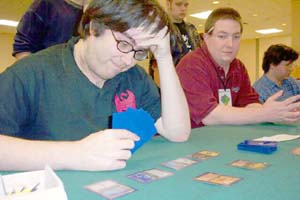 Now Mowshowitz could Oath. Five cards down he found his Scrounger. Not the result he was looking for. He AK'd for two, then Racked for four, but didn't find what he needed. He played two islands and passed it back. He proclaimed that island, Wonder would kill him. Cunningham did not have it. The Scrounger traded for two cards in hand from the Mongrel, leaving Mowshowitz at three.

Mowshowitz set up his deck with Scroll Rack, then decided not to Oath it away, instead getting one card deeper in hand and Time Warping. The second time around he put his deck into the graveyard. Krosan Reclamation put Scrounger and Moment's Peace back in a random order. He drew, and passed it back to Cunningham, playing Moment's Peace during his upkeep. Cunningham drew Ray of Revelation and destroyed the Oath. That prompted Mowshowitz to concede.

Mowshowitz started this game with Exploration and then Horn of Greed, Gush, replay a land on turn two. Cunningham played Wild Mongrel. Mowshowitz ratcheted up the unfair with a second Horn. Cunningham set him back with Ray of Revelation on the Exploration. Mowshowitz dropped the Oath, pushing it past Cunningham's Logic with Counterspell. Cunningham dropped him to twelve and busted out Waterfront Bouncer. Mowshowitz Oathed up Scrounger and tried a Time Warp, but Cunningham had another Logic, and then Bounced the Scrounger and attacked for lethal damage.