Round 8:
Fast and Furious

This round featured a rematch from yesterday's Modern rounds, where Shouta Yasooka defeated Shuuhei Nakamura under the lights and cameras. Arguably the best Constructed Magic player of all time, Yasooka's one weakness in his game has been Limited. Recently, however, he started to shake that tarnish off his reputation with a Top 8 performance at Grand Prix Boston-Worcester, a Magic2013 Limited event. 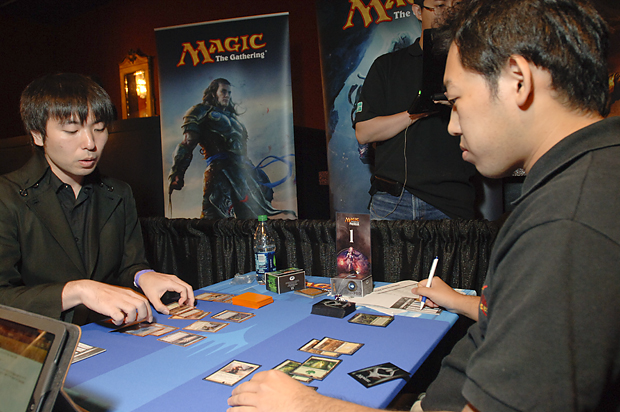 Shuuhei Nakamura and Shouta Yasooka go head-to-head in their second match against each other at the Players Chamionship.

Despite this recent excellent performance, the ball seemed to be in Nakamura's court for this second meeting between Japanese juggernauts.

Yasooka won the die roll and chose to play first. He led with a Goblin Arsonist on the first turn, completing the Naya-tron by turn 3, but adding no new creatures. Nakamura added a Scroll Thief to his board, but Yasooka nullified it with Pacifism. Unsurprisingly, when Yasooka added a War Priest of Thune to his side on the following turn, he declined to blow up an enchantment.

Admittedly, as much as I love watching Yasooka and Nakamura play Magic, I hate covering them. They play so blindingly fast that it's nearly impossible to keep up. The game was less than a minute old and they were already entering the mid game. Neither player took more than ten seconds per turn. After scrawling shorthand notes to follow the pace of play, I was finally given a break to catch up. Nakamura had built his board by adding a Griffin Protector and a Faerie Invaders to the battlefied, and he stopped Yasooka's attempt at a Garruk's Packleader with an Essence Scatter. Yasooka managed to force through some damage and kill the untapped Invaders with a Predatory Rampage. Nakamura rebuilt with an Aven Squire and a Master of the Pearl Trident, but they wouldn't last long. 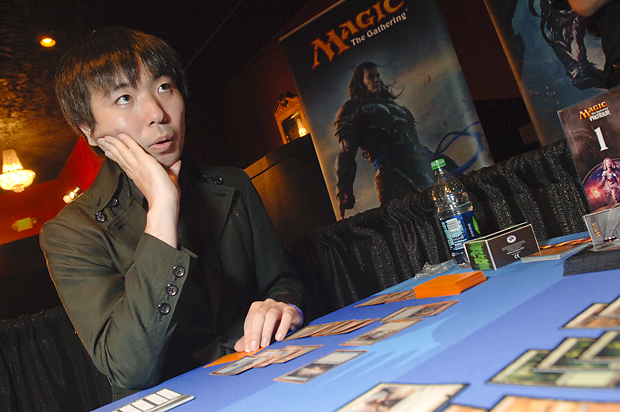 Yasooka sent his team, and Nakamura blocked the Arsonist with his Master of the Pearl Trident, killing the Goblin but losing the Merfolk to its triggered ability. After combat, he used a Prey Upon to kill the Squire. Yasooka was behind in life and on creatures, but he was making a good show of staying alive. After this flurry of activity, however, Yasooka was gassed. He didn't have anything at all to add to his side of the board over the next few turns, as Nakamura added a Watercourser and Faerie Invaders, swinging unopposed.

On the final turn, Yasooka drew his card and then slammed his hand face-up on the table with a frustrated grin, revealing a boatload of lands.

Nakamura had to mulligan his opening hand in the second game, and by turn four, he was regretting it. Yasooka didn't have the quickest start, opening with a Quirion Dryad on turn three and following it with a Prized Elephant. Nakamura, however had not made more than a single Island, being forced to discard before he could add a second permanent to the board. The players were ready to go to game 3, and it wasn't even ten minutes into the round...

Nakamura was the one on offense in this final game. He started with a Watercourser and Arctic Aven, though his Aven didn't have a Plains in play to enhance it. Yasooka found a wonderful way to offset the damage Nakamura was dealing with a Healer of the Pride, but he couldn't really block. When Nakamura tried to attack, Yasooka used Chandra's Fury to try and kill the Aven, but Nakamura saved it with an Unsummon.

Yasooka started adding more creatures to his board, including a Torch Fiend and a Garruk's Packleader. When Nakamura replayed his Aven, Yasooka shot it down with a Prey Upon. The game was moving in opposite directions, with Yasooka's life total climbing as Nakamura's fell, and Yasooka's board filling as Nakamura's emptied. The death knell came when Yasooka used Volcanic geyser to reduce Nakamura to an unimpressive Crusader of Odric and attacked him down to 8. 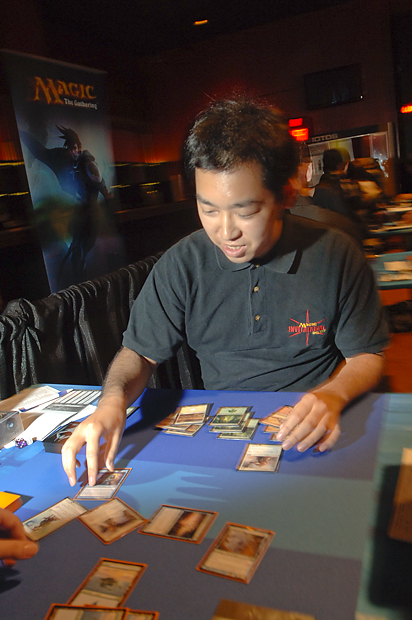 Yasooka lets loose with a flurry of cards.

Nakamura tried slow Yasooka down by flashing in a Faerie Invaders to block, but Yasooka's attack dropped him to 2. Safe Passage bought him one more turn, but when his Rummaging Goblin picked up a Kitesail on the following turn, it was just enough to finish Nakamura off.