By by David Strutz

We've already seen some of Shaheen Soorani this weekend in yesterday's Round 5, and today he's also playing a red-based draft deck. This time he paired Forests with his Mountains. Meanwhile, Mike Lapine is piloting a white-black concoction.

Before the match, the players chatted about their tournaments so far. Each of them has one loss, both suffered in yesterday's draft rounds. Let's find out which of them can hand his opponent a second Limited loss on the weekend. 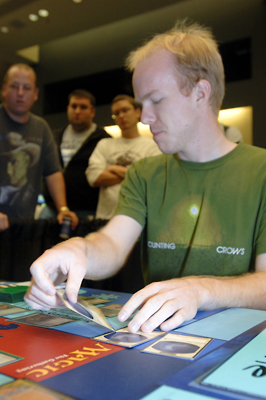 Mike Lapine proceeds, spectrally.The players shuffled up, rolled off, and got underway. After no mulligans Mike led off the match, but Shaheen made the first play with a turn-one Duergar Assailant. A turn-two Mistmeadow Skulk from Mike declined to block Shaheen's Mogg Fanatic variant, and Shaheen added Devoted Druid to his board.

On turn three, Mike made a Scuttlemutt and then Shaheen produced Farhaven Elf, finding a fourth land. The next turn, Mike, stuck on two Swamps and one Plains, drew, and thought for a moment before adding Faerie Macabre to the playing field. He passed with no attacks, and Shaheen without hesitation played his fifth land before laying a Valleymaker, using his Druid. Apparently he's playing the Draft version of Mana Ramp.

Undaunted, Mike wasted no time on his turn dropping, his fourth land and pointing Unmake at the bomby Giant. He got in for 2 flying damage to tie things at 18, and despite his slow mana development he wasn't in terrible shape. But Shaheen wasn't done yet, and he used his next turn to play Woodfall Primus, destroying one of Mike's 2 Swamps and leaving his opponent with just three lands in play once more. He poked again with the Assailant before passing the turn.

Mike had Curse of Chains for the big green monster, but Shaheen dropped Thunderblust and thundered into the red zone. "Rares, rares, rares," he said in a tone of almost pity for his opponent. Mike sighed at the sight and threw his previously inactive Skulk in the way, allowing Shaheen's Assailant to do its job, binning the little Kithkin.

If Mike was discouraged, he didn't show it. He sent in with his Macabre again before casting Spectral Procession to make some more flyers. On his next turn Shaheen slammed in with his Thunderblust again, and two Procession tokens got in the way. However, they met a Double Cleave, and Mike's chumps were unable to force Mr. Blusty to trade and persist. Shaheen then played and retraced Flame Jab to kill Mike's fresh Scuttlemutt, leaving his hand empty though he was in great shape on board.

Mike, still stuck on three lands, played a Woodlurker Mimic, which stepped in the way of the Blust on Shaheen's next turn. The red-green player kept up the pressure by playing his drawn card, which was a Howl of the Night Pack. Though only two wolves entered the fray, Shaheen's board was facing down only a Faerie Macabre and a lone Spirit token.

Struggling for blockers, Mike added a Gwyllion Hedge-Mage to try to stabilize. He got the free Kithkin off his Plains, but sadly, no Swamp had shown up to give a -1/-1 counter to the persisted Thunderblust. Shaheen's next turn saw him send with the Wolves only, which traded with Mike's 2-power dudes. On his next turn Mike could only play an Elvish Hexhunter and Shaheen got in there with the 6/1 and his Farhaven Elf again. Mike's 1/1 blockers met Fire at Will, and he fell to 10, then 3 the next turn before scooping.

The players bantered between games while sideboarding, talking about this and that before Paul Cheon appeared on the sidelines. Shaheen asked, "How'd you do?" The former National Champion responded with a gesture in the negative. "You getting there?" he said, and Shaheen gave him the update.

Shaheen sided out Woodfall Primus for Marshdrinker Giant, lowering his curve. After the match he explained, "He's good, but my deck already costs a million." Mike's sideboarding included a Talara's Bane, which should prove useful against all those large green men. 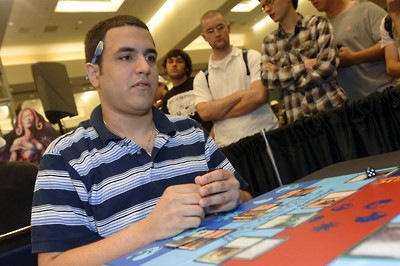 Shaheen Soorani brought a pen.Mike took the play, but he had to mulligan. Shaheen's seven were okay, and he made the first play with a Devoted Druid, then a turn three sideboarded Marshdrinker Giant, which took out one of Mike's Swamps. Mike's turn three was Mistmeadow Skulk, enchanted with Edge of the Divinity. Shaheen lamented the strong blocker, but he kept up the mana ramping with a Wicker Warcrawler and a Valleymaker on his next two turns. Mike, not stuck on lands this game, could only answer with a Crowd of Cinders.

But for all his huge monsters, nothing could get through Mike's Skulk. Shaheen added Morselhoarder and passed, then Mike played a Glamer Spinners that moved nothing and was down to one card against Shaheen's three.

Mike finally broke the red zone, getting in there with the Glamer Spinners and taking Shaheen to 18. At the end of turn, a Mountain courtesy of Valleymaker took down Mike's brand-new Scuttlemutt, and now Shaheen felt he could do some real damage. He swung with the Morselhoarder, Wicker Warcrawler, Marshdrinker, and Valleymaker. Mike's Skulk and Crowd blocked two guys, but Mike took the rest, and a Double Cleave saw the attack take Mike all the way to 8. Smelling blood, Shaheen added Tattermunge Duo.

Mike drew for the turn and considered an attack, but he felt he needed to defend against the large red and green monsters on the other side of the table. The Warcrawler, Mr. Morsel, Marshdrinker Giant, and the Duo came in, and the Skulk wasn't enough to save him.