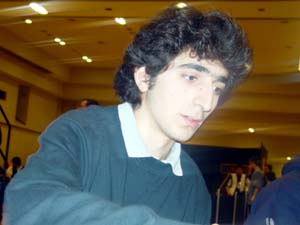 season, France has truly shined in the realm of constructed. At Pro Tour New Orleans, it was the French Goblin Charbelcher/Mana Severance "Clock" deck that was the most successful, putting three of its players into the Top 8. Two of those competitors were Gabriel Nassif, and Nicolas Labarre. The French haven't disappointed once again, as many are playing a Tooth and Nail deck that generated quite a bit of buzz yesterday. Using mana acceleration and land tutors for Cloudposts, the deck can cast Tooth and Nail to get board dominating creatures like Darksteel Colossus and Platinum Angel into play, or can simply hard-cast them from the hand. Nassif is playing the deck this weekend, while Labarre is running the more typical Affinity deck. Both players come into this round at 6-2, and are looking for a win to bring them one step closer to another constructed Pro Tour Top 8.

Labarre took a mulligan, and after he kept his six land hand, Nassif took one as well. Labarre played a first turn Arcbound Worker, and a Stinger on turn two. The weenie assault continued, as Labarre animated a Blinkmoth Nexus, played Frogmite for free, and attacked with his team. Oxidize killed the Nexus, and Nassif took two damage. Labarre had one Nexus left, and it attacked on the following turn as Nassif was lacking any early resistance. He played Solemn Simulacrum on turn four, which was promptly killed with Electrostatic Bolt. This cleared the way for another attack, dealing five more damage to Nassif. He played a second Simulacrum, and it blocked Frogmite while Nassif's Nexus traded with Labarre's. This left the Stinger and the Worker as the only creatures on the table, while Nassif was at five.

Reap and Sow with entwine took out Labarre's Glimmervoid, and got a second Cloudpost into play. Labarre's attack brought Nassif to three, and Nassif played and activated Mindslaver. Labarre didn't have anything in hand to cause some damage to the board, so Nassif just made him tap out. He then took his next turn and played Tooth and Nail with entwine, putting Darksteel Colossus and Platinum Angel into play. Labarre played another Stinger and a Disciple and ended his turn. Nassif activated Stalking Stones and sent it into the Red Zone, along with the Colossus and Angel. Labarre blocked with his weenies and made a Stinger 3/3, and Nassif used Sylvan Scrying and Reap and Sow to get two more Stalking Stones into play. Labarre summoned a Ravager, which combined with the Disciple to give him a combo kill and then some, but it was no good as long as the Angel was out. Nassif summoned Viridian Shaman, and Labarre quickly conceded. 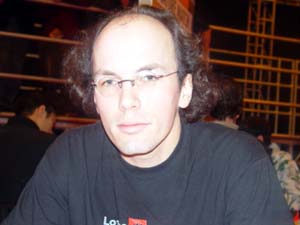 Labarre had a rough start on this one, as he had to mulligan down to four. He still managed to have a second turn Frogmite, but it died to Oxidize. Nassif played Chalice of the Void set to one, and started to accelerate with Sylvan Scrying, getting Cloudpost. Labarre had a Stinger in the air, and used Dismantle to destroy the Chalice, putting the counter on his Stinger and getting a big laugh out of the crowd. Another Scrying put a second Cloudpost into play, and Reap and Sow with entwine got a third. Tooth and Nail followed, putting Leonin Abunas and Platinum Angel into play. There was enough mana left to kill Labarre's Vault of Whispers with Reap and Sow, leaving him with one land in play. He played a Blinkmoth Nexus, and ended his turn. Nassif cast a second Tooth and Nail, getting two Viridian Shamans, and Labarre conceded.