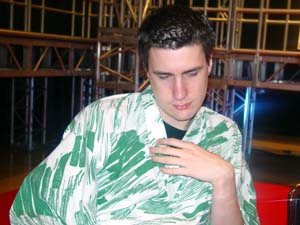 Jelger Wiegersma and Diego Ostrovich sauntered toward the feature match area they turned many a head. They were decked out in white and green kimonos from Diego's hotel. Jelger greeted his opponent and asked, "You like my Kimono?"

Kuroda was the only undefeated player after the first day of battle. He was playing Big Red, a mono-red deck with Arc-Slogger and abundant artifact hate. Unlike many of the other versions that we had seen this weekend, Kuroda was not running main deck Furnace Dragons but he did have them available in his sideboard. Kuroda's deck was sporting a fully packed arsenal of burn including Pulse of the Forge and the Lunge-esque Barbed Lightning.

Jelger was running Ravager Affinity and was not excited about facing the tournament's only undefeated player. "This is a very bad match-up for me." Jelger was on a pretty decent run of his own though. He had not taken a loss since the end of Round Two yesterday.

Both players kept their opening hands and Kuroda opened with an innocent looking Moutain. Jelger's first play was the critical Darksteel Citadel and an Aether Vial. With so many decks gunning for the Affinity decks it was crucial to be able to start your mana development with an indestructible land.

Kuroda played a Blinkmouth Nexus but had no turn two Talisman to accelerate his mana. Jelger used the Aether Vial to play an end of turn Ornitopter. On his own turn he played a Talisman and an Arcbound Worker.

Kuroda was still developing slowly and played another Mountain. With one counter on the Vial, Jelger was able to make another Worker end of turn. On his turn he played a Chromatic Sphere and sacrificed it for blue. He played a Seat of the Synod and a Myr Retriever. He sent both of his Workers into the red zone and Kuroda blocked one of them with his Blinkmoth Nexus and pumped it to save itself.

Kuroda played a fourth land and fetched a fifth thanks to Solemn Simulacrum. Jelger did not hesitate to animate his own Nexus and attack with everyone but the Ornithopter. The 2/2 Worker trade with the Simulacrum and Jelger put the counters on his Nexus.

With six mana in play, Kuroda clogged up the ground with an Arc-Slogger. Jelger kept the pressure up and attacked with Nexus, Worker and Retriever. Kuroda blocked the Worker and Electrostatic Bolted the Nexus. Jelger activated another Nexus and put the counter there.

Slogger got in for four and Kuroda began to count his library to check how many activations he could muster over the next couple of turns. Jelger passed the next turn glumly--he was out of both cards and action--and Kuroda rechecked his sums EOT and decided against any Arc-Slogging for the time being.

OnKuroda's turn he Detonated the Aether Vial. He checked what could come back if he killed the Retriever and was not concerned. He smoked it and Jelger regrew a Sphere. He then shot down the Thopter as well and attacked for four.

Jelger was holding a Disciple of the Vault and an Arcbound Ravager. He looked for some way to make it all come together without the Arc-Slogger mucking up his plans. He cycled the Sphere for black and was rewarded with another Disciple. He played the first one and then cast the Ravager and passed the turn back to the Japanese player.

Kuroda shot Jelger with the Slogger and then aimed a Pulse of the Forge at his dome. He had just enough mana remaining to activate his Blinkmoth Nexus and use it to ignite a Shrapnel Blast for the final points of damage. Jelger checked to see if could finish his opponent off with the Disciple/Ravager but it was not enough.

Jelger took out his Aether Vials and a couple of Ornithopters and a Thoughtcast for Terrors, Myr Retriever and Genesis Chambers. He also brought in Glimmervoid to smooth out the mana for his Terrors.

Jelger opened with a Worker while all the Japanese had was a Mountain. His second Turn brought Myr Retriever and Frogmite. Kuroda bided his time with a Talisman.

Jelger attacked for four and kept the pressure up with a Genesis Chamber that produced a 1/1 when he played Myr Enforcer. "Go Jelgy," Diego cheered from the neighboring match. He had nine points of power on turn three.

Kuroda Fireballed the Retriever for one and then Echoing ruined the Enforcer.

Jelger played Skullclamp and drew two cards boosting his Frogmite to a 3/3. He attacked and played a Myr Retriever and made an additional 1/1.

Kuroda was scuffling for land but played another Talisman and a Damping Matrix. All Jelger could do was attack. He followed up with a Disciple of the Vault and made another token--Matrix does not effect the triggered ability of the Chamber or the Disciple for that matter.

Kuroda still only had three lands and two Talismans and was deep in thought about how to extricate himself from the threats on the other side of the red zone. Finally he passed the turn. There was not nearly as much thought on Jelger's turn. He quickly turned all of his men sideways and sent them toward the red Zone. Kuroda Used Barbed Lightning to kill the Disciple and chump blocked the Frogmite with his Nexus. When Jelger played another Myr Enforcer and made a token the Japanese player laughed and scooped.

Kuroda was agonizing over is opening hand. It featured a pair of Detonates, Echoing Ruin, Solemn Simulacrum and three lands. The problem? All three lands were Blinkmoth Nexus. After a long and visibly painful period of deliberation, Kuroda announced he would keep it.

Jelger quickly announced he would as well. He led off with a Skullclamp and his second turn saw him cast Genesis Chamber and Frogmite. Kuroda sighed as he could only play another Nexus.

Jelger kept up the pressure with another Frogmite and a Myr Enforcer. Kuroda shook his head when his fourth land was the final Nexus in his deck. He played the Simulacrum and fetched out a Mountain and made a token thanks to the symmetry of the Genesis Chamber.

Jelger played an Arcbound Workder and clamped it to draw two cards. One of his Frogmites became a 3/3 and the Dutchman quickly sent everyone into battle. Kuroda trade his Simulacrum for an unjuiced Frogmite and a card while two Genesis Chamber tokens clashed as well. Kuroda fell to twelve.

He deliberated the correct play on his next turn. He could cast a Talisman and did that right off. His next played was less clear. He could either play another Solemn Simulacrum and hope for a sideboarded Furnace Dragon on the next turn or he could use his Echoing Ruin to wipe out the horde of tokens and Detonate the Skullclamp.

He chose the latter play. Jelger had another Skullclamp waiting in the wings and put it on his Enforcer. He attacked with everyone and dropped Kuroda to one. 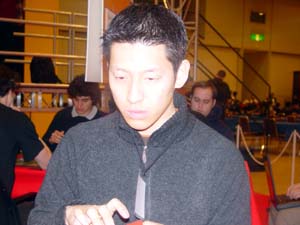 Even if he drew a Furnace Dragon this turn, Kuroda would need his Talisman to power it out and he would die in the process. He shook his head and extended the hand in defeat.

Jelger asked about what cards were in Kuroda's opening grip and the Japanese player explained his quandary. Jelger did not hesitate, "You have to keep that one."