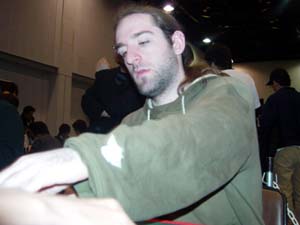 Mori wasn't happy with his deck, he's got to be even less happy about who he's facing this round. Gomersall was on his right, so Mori doesn't quite know the full story of what he's up against, but he did pass him a Vedalken Archmage and Myr Enforcer. If the rest of the deck is near that level, Mori might be in trouble. Then again, if his Glissa goes unchecked, it's very unlikely that Gomersall can't win.

Mori showed off some of the English he knows, sarcastically joking, "My deck is so good!"

Gomersall mulliganed his opening hand. Mori showed me his draw, which had Leonin Elder, Auriok Blademaster and no plains, which he was reluctantly keeping due to Journey of Discovery. He cast it on turn three and Glissa showed up on turn four, causing Gomersall to take a deep breath and his shoulders to drop. He played Vedalken Archmage, and things were about to get interesting. Mori tapped out on his turn for Loxodon Mystic, and Gomersall started drawing cards playing AEther Spellbomb, Bonesplitter, and summoned Neurok Prodigy. Mori put a Vulshok Morningstar on the Mystic and attacked for five, then played Leonin Elder. Gomersall answered back by putting the Bonesplitter on the Prodigy, and attacking for four. He then put the Bonesplitter on a Psychic Membrane, but Glissa took care of the equipment. A Myr Enforcer that came out for seven mana died to Echoing Ruin, and even a Chromescale Drake that found another Enforcer wasn't too impressive. With a dominant board and Glissa making any situation unfavorable for Gomersall, the game was soon over. Gomersall opened with AEther Spellbomb and Bonesplitter, while Mori had Leonin Den-Guard and Leonin Elder. Gomersall's Chittering Rats made Mori lose a draw, and he played Vulshok Gauntlets to get some quality equipment for his Den-Guard. The Rats took the Bonesplitter and attacked for four, and when the Gauntlets equipped the Den-Guard, Gomersall gained some tempo advantage by bouncing it with the Spellbomb. Thanks to a pair of cheap Dross Golems, Gomersall pulled far ahead in the race, although Mori struggled to stay alive, playing a Goblin Replica that traded with a Golem. Gomersall kept the pressure coming with Pewter Golem, and Mori's Den-Guard came back out with the Gauntlets. There was still no answer to Dross Golem's evasion, and it brought Mori down to seven. Echoing Ruin finally dealt with the threat, and Mori played Glissa once again to Gomersall's dismay. He went digging for answers with Darksteel Pendant, and put Bonesplitter on Pewter Golem. It seemed that things would at least be stabilized, but Blinding Beam broke the game open to give Mori the match.