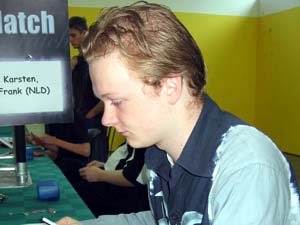 finished very near the top of the standings and this match might be decisive. The classic clash between Affinity.dec and GreenArtifactHate.dec might simply come down to how long Frank spend celebrating his country's football victory last night.

We had a few minutes to walk around the tournament area while Lauriol changed his sleeves.

This created a problem. Frank had Darksteel Citadel and Blinkmoth Nexus. He wanted to know if the Explorer would produce any type of mana at this point. Three judges and two minutes later he got his answer: "no".

His next draw wasn't amazing because he sat there for a good minute mouthing some sort of math trying to figure out what he should do. Eventually he played a second Ravager and Disciple of the Vault.

The Explorer chumped the incoming Ravager and Sylvain tapped out to play Troll Astetic. Again Karsten stopped to think about it. He settled on giving the big Ravager a Cranial Plating.

The Troll took one for the team. Oxidize and Tel-Jilad Justice took out both Ravagers on the following turn. The Disciple grabbed the Plating and brought Lauriol down to fifteen, along with the Nexus.

Unimpressed the French started abusing his deck. Eternal Witness gave him Tel-Jilad Justice once again. He used to ice the Nexus, when Karsten played Thoughtcast.

A second Eternal Witness brought back the Justice once again, and the Dutch was now down to a single land, Disciple and Plating. Things looked grim for Frank Karsten.

He tried to climb out of the hole by cycling Chromatic Sphere to play Thoughtcast. That gave him three new cards and the Disciple's ability brought Lauriol to eight.

Sensing a need to speed things up, Sylvain attacked with both Witness and played Beacon of Creation to get himself four nifty tokens. Karsten answered with Arcbound Worker and Myr Enforcer.

On his upkeep Lauriol used another Tel-Jilad Justice to kill the Enforcer bringing himself down to seven. Then he sent his whole crew in. The Worker traded with an Eternal Witness.

This left Frank at eight and Lauriol at six. He was within Blast range now, although Kartsten had no Red mana. The Dutch played Glimmervoid... but the best he could do was a second Cranial Plating.

The Disciple stopped the second Eternal Witness but Karsten dropped to two in the process. He played Thoughtcast, cycled a Chromatic Sphere... and came out empty.

Again Lauriol sent his hand back. Karsten made Zvi proud: he played a turn one Aether Vial. He use it on his second turn playing a free Arcboun Worked and Cranial Plating.

Sylvain's first move was Tel-JIlad Chosen, a great blocker in this situation. Frank agonized for a full minute before settling on Thoughtcast and Myr Enforcer. The French reached three mana and began his artifact-hating crusade: Shaman on the Plating.

Terror took the Chosen away and the Enforcer smacked Lauriol around. The French bounced back with another Chosen and Sylvok Explorer. His opponent attacked Blinkmoth Nexus and dumped his hand: Frogmite and Disciple of the Vault followed by another Disciple and Cranial Plating.

Despite his impressive array of artifacts, he was still in check. Lauriol played a Fangren Firstborn and prayed for some artifact removal. He got a Beacon of Creation (for five tokens).

He cycled Chromatic Sphere to find another Arcbound Worker and played it. Sylvain moved his hands like a madman doing blocking math. His "combo" of Beacon of Creation tokens and Firsborn gave him a good shot at Karsten, even with his opponent at unblemished twenty.

His French math class eventually ended and he turned his whole team sideways. It was Frank Karsten's turn to murmur.

Frank: "I'll move some creatures around."
Sylvain: "No problem, just warn me when the blocking is done."

It didn't take him long. He sank to seven, and Lauriol fell to eleven before playing Troll Astetic to hold the fort. It was Karsten's turn to stare at his army and mutter. In the end he decided he couldn't attack, merely playing a second Nexus.

Lauriol made up his mind quite quickly this time. He send his 3/2 Tel-Jilad Chosen in, trading it for a Disciple. Again the Dutch had no play. Slowly, Sylvain Lauriol sent his team in.

Three creatures went through bringing Karsten to a mere one, while Lauriol fell to nine. A Pulse of the Tangle gave the French an extra blocker. Frank sent his three creatures in. Lauriol started doing the math."

Frank: "Let me just speed this up, I'll use Vial to play Atog, sacrifice everything with damage on the stack."

Sylvain checked the math and conceded. They had three minutes left in the round.

Sylvain: "You want to try it?"
Frank: "Of course."
Sylvain: "Judge, how many minutes do I have to shuffle between games?"
Judge: "One."

Karsten need a fast hand, and he didn't get it. His first creature was a turn two Arcbound Ravager with a Tel-Jilad Chosen already on the table. Surprisingly Lauriol sent his Chosen in and Oxidize the Ravager.

Out came the dreaded Plating and still stuck at two mana, Sylvain again sent his Chosen in. Atog and Ravager showed up while Sylvok Explorer bailed the French out of his mana problems just has time ran out.

Sylvain took his time to think out and used Oxidize and Viridian Shaman to blow Karsten's nonland artifacts before passing the turn while muttering in French.

The Dutch rebuilt with Disciple of the Vault, Aether Vial and another Cranial Plating. The Shaman chumped the Atog and Lauriol tapped out to play Glissa Sunseeker. 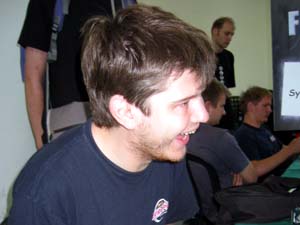 Karsten's Nexus grabbed Cranial Plating and smacked Lauriol down to eleven. He wasn't happy about that. He played Eternal Witness and made the right blocks, Karsten couldn't sneak the final damage points in with Glissa killing Disciple of the Vault with first strike damage before icing the double-Plating carrying Nexus.