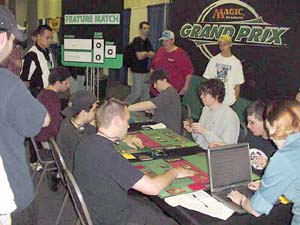 2020 is the second highest ranked team in the world, but "we kind of sucked at the last two Team events," Elijah comments. Their team name comes from the players' average Limited rating when they formed the team, but according to Elijah, their ratings have fallen a bit since the team was formed.

The Fun Police are named after a mean store owner that the players used to know.

When Mike attacked with Battering Craghorn, Flamewave Invoker, and Wirewood Savage, Elijah chose not to block, even though he had a lot of creatures of his own. Slightly perturbed, Elijah went to 13, but attacked back and managed to do just enough damage to Mike to emerge victorious.

The first creature in play is Silver Knight on Tim Aten's side, against Dave Rood's black/white deck. Dave played a Daru Cavalier, but not until after some damage from the Silver Knight has been dealt.

After a particularly cunning combat step, Dave is left with Daunting Defender in play to Tim's three creatures. Dave is trying his best to recover, but Tim doesn't stop attacking. Dave falls quickly to Tim's marauding army of clerics.

John Hunka and Steve Wolfman attacked each other with morph creatures and not much else; John kept perusing his face-down creatures, almost as if he's forgotten what they are in the brief time that they've been in play. John's held on to parity thus far, until Steve played Krosan Vorine to match his morph creature.

When Steve attacked with his Krosan Vorine, John blocked with a Mistform Seaswift to trade. They're left with a real and a morph creature apiece. John attacked back with both his creatures, and Steve chose to block with both of his. When John tried to cast Vitality Charm, giving his morph creature trample, Steve countered with a skillful use of Willbender, ensuring that he was the only one with a creature left in play. John played another morph creature, trying to catch up with Steve's offense, but the game's momentum swung so hugely on that key combat step that it's tough for him to recover.

Quite a few creatures later, Steve maintained control of the game. But John's demeanor remained unflappable. He draws enough large creatures (most notably Elvish Aberration) to keep up with Steve, and then when he attacked for the final time, he cast Accelerated Mutation to hammer the final nail in Steve's coffin.

Mike swung with Macetail Hystrodon and another morph creature, which took Elijah down to twelve. He played out the last cards in his hand in an effort to stop the bleeding, but Goblins Turncoat and Machinist are not nearly enough to keep up. 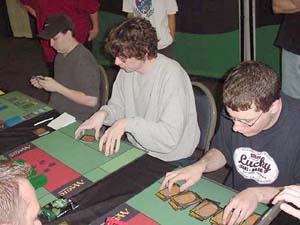 When Mike attacked with a morph creature and Elijah tried to kill it, Mike flipped over Warbreak Trumpeter. Five Goblins in play wasn't terrible for Mike, but Elijah shook his head and shuffled his cards around as he tried his best to deal with it. He cast Erratic Explosion on Mike's Goblin Machinist, which was activated in response, but Elijah flipped over three mountains and a Skirk Drill Sergeant. He was obviously bothered by this turn of events.

Elijah played a Lingering Death on the Machinist, which Mike kept activating in order to set up some better draws for the next few turns. He did turn over quite a few lands, but couldn't find enough creatures to get back into the game.

Dave played a morph creature to match Tim's Silver Knight, then added another in short order. Tim's morph turned out to be Spined Basher. Tim added a couple more morph creatures to keep up with Dave's army, but Dave just kept the creatures coming. A quick look on his side revealed Sootfeather Flock and Frontline Strategist backed up by two Daunting Defenders.

The first creature of Elijah and Mike's game was an anonymous one, and Elijah chose to take the damage when it attacked to save his Death's-Head Buzzard for the offensive. He ends up blocking with it, then cycled Dirge of Dread to try and find some answers. Elijah cast Erratic Explosion to kill Mike's morph creature with Extra Arms on it.

Dave was forced to make some tough blocking decisions, ending up getting his Defenders involved in blocking some morph creatures. After a few excellent rounds of strategic combat, Tim ended up on the higher end of the life totals once again.

John and Steve continued a common theme – playing lots of morph creatures and attacking each other for a few points here and there. Their face-up creatures at the start of the game were each Mistform Seaswift, but when Steve played Krosan Vorine, the game began to look a little more one-sided again.

Steve ended up with four creatures to John's two, but John tried his best to come back and returned the opposing Seaswift to Steve's hand with Echo Tracer. When Steve attacked with the Vorine and John blocked with his own morph creature, both played Vitality Charm. In short order, Steve has four attackers again and provokes John's morph creature into blocking the Vorine. When John is left with no creatures to defend against Steve's horde, he concedes and they shuffle for Game 3.

Goblin Turncoat and Warbreak Trumpeter are the first creatures in play this game, and Elijah followed his Turncoat with another one shortly after. He gets stuck on three land, and is forced to play Lingering Death on Mike's Wirewood Savage.

Mike runs out of creatures quickly, but then played a Berserk Murlodont in order to stop Elijah's deck from getting out of hand. Erratic Explosion found a Savage Firecat to kill the Murlodont quickly, and Elijah maintained near-complete control of the board for a few minutes. 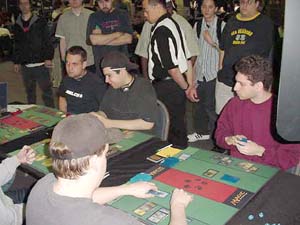 Until Mike played Krosan Tusker, as huge beasts tend to give black/red decks major problems. Mike ends up on the winning end of a combat phase, as he unmorphed Battering Craghorn to try and kill Elijah's remaining Goblin Turncoat. Elijah played a bunch of smaller creatures, and Mike just couldn't keep up. Elijah's horde quickly overwhelmed Mike's creatures, even though they were much larger.

In the third game of the match at the end of the table, John's Serpentine Basilisk faced down Steve's Krosan Vorine. Steve played a Barkhide Mauler, but John's Elvish Aberration made an appearance and was swiftly enchanted with Dragon Wings.

Steve's Slipstream Eel made an appearance and turned out to be insanely good against John's blue/green deck. But when John decided to attack, he first unmorphed Echo Tracer to bounce the Eel back to Steve's hand. He played another morph creature and passed the turn.

With only eight life, Steve stopped and perused his options. He considered the game state carefully, as John looked at the crowd gathered and gave the first indication that he was able to think about something outside the game. Steve shook his head and attacked with Mistform Seaswift, which John let through, then played the Eel again.

"You have one card?" John asked. Steve assented, and John attacked with the Aberration again. He played another creature, trying to outrace Steve and thereby clinch a victory. Steve casts Frozen Solid on the pesky Aberration as time is called, but John had the Vitality Charm to ensure the Aberration's continued success.

When John casts Pemmin's Aura on his own Barkhide Mauler and attacks, Steve has no other options and concedes defeat.