Round 9: Alejandro Dominguez vs. Eugene Okin 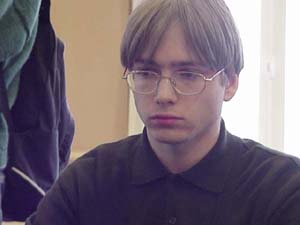 Okin came all the way from Russia with the usual stance for an Eastern player: calm, silent and extremely precise in every move. Alejandro, on the other hand, just had to skip over the Pyrenees to reach Biarritz with his usual Spanish, or better yet, Latin, good humor, dramatic faces and constant comments.

The round got of to a sour start when an apparent miscommunication between the two players led Alejandro to keep a hand with only one land, thinking he was going to draw first. After he kept the hand, both players waited for the other to begin and as the problem became obvious a judge had to be called.

After that problem the game finally got underway. Having taken a double mulligan Dominguez could only sit and sigh why the Russian played a Dedicated Martyr, Aven Flock and an Aven Archer.

The Spanish finally found some land and played a Metamorphic Wurm and a Krosan Avenger but by now the Okin Air Force was already way ahead of the race. Both players were now visibly shaken with Okin even making a huge Threshold mistake and having to burn for one.

A Roar of the Wurm token gave Alejandro some extra beef in the huge shape of the 6/6 but it didn't come soon enough to stop the flying duo from finishing the game. The first game was over before it even started.

A Testament of Faith took out an early Mad Dog from Dominguez and soon a Pilgrim of Virtue, Mystic Zealot, Pianna and above all a Master Apothecary locked the Spanish out of the Red Zone. Obviously this led to a few comments in Spanish that might have included comments about how much Alejandro hates this game and how unfair life can be. Little did he know. 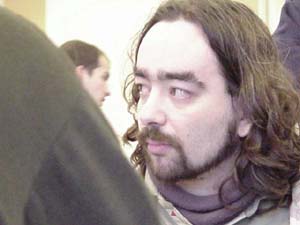 With defensive creatures piling left and right, but with a huge Spanish supporting crowd, Alejandro tried to find a way to turn the game around. The Russian white army loomed ahead on his path and Okin seemed on the verge of shifting in a more attacking stance.

The mood around the table fitted the look of the table itself. Alejandro seemed destined to die from Aven Flock pecks while the minions controlled the ground. The two 6/6 Wurm tokens, Rabid Elephant, Lithatog and Metamorphic Wurm couldn't find a way past the Apothecary-led wall, with a Hallowed Healer to rub some salt in.

But the Spanish wasn't done yet. He had an Overrun and sent his huge monsters into the Red Zone looking to bruise the Russian. However Eugene wasn't about to be denied: he had his Moment's Peace and used it to deal a devastating last blow to Dominguez' last and desperate breakthrough hope.

The writing was on the wall almost from the start of the second game but Alejandro fought on as long as he could. In the end the cold Russian machine was too much for the Spanish and the white army won another battle.