Round 9: The Ancient Kavus vs. AlphaBetaUnlimited.com 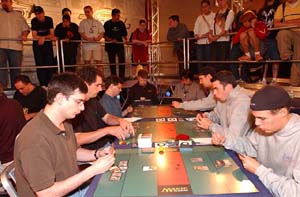 The Ancient Kavus vs. AlphaBetaUnlimited.com

As the players waited for the draft to start, there was some discussion regarding how many Grand Prix championships were represented at the table. Even though Kai Budde and his four Grand Prix wins were at the table next to theirs, Vienneau, Pustilnik, Krakower, Fuller, Benafel and Boeken definitely had more Grand Prix victories among them than any other table in the room.

The first pack was opened by Benafel, and was less than impressive. It contained Exotic Curse, Pincer Spider, Llanowar Knight, Hooded Kavu, Fertile Ground, and not much else. Benafel took the Curse, Fuller took the Spider, and Krakower drafted the Kavu. Fuller opened and took Yawgmoth's Agenda in the second pack, while Krakower took Tribal Flames, Vienneau drafted Tower Drake, Pustilnik took Benalish Trapper, Boeken got a Thornscape Apprentice, and Benafel picked up Vodalian Zombie. The next pack gave Krakower his second Tribal Flames, a Rooting Kavu for Vienneau, Phyrexian Infiltrator for Pustilnik, and Boeken and Benafel picked up their second copies of Thornscape Apprentice and Vodalian Zombie.

Benafel soon picked up his third Vodalian Zombie, and Vienneau seemed concerned since his deck had a decent amount of green in it. Boeken picked up Darigaaz, the Igniter, but would need to go into four colors to support it, since he was already deep into green/white with two Thornscape Apprentices and Armadillo Cloak. Fuller also picked up a late Glimmering Angel, and seemed to be leaning towards blue/red/white, abandoning black and the Agenda he had. Vienneau opened Magma Burst and took it, and started to go deeper into red with two Mire Kavu. It seemed that Vienneau was ready to stop drafting blue at this point, even though he had Tower Drake and Recoil. The rest of Planeshift saw Pustilnik get two Bog Down, and Benafel went into red for Thunderscape Battlemage and Crosis' Charm.

Apocalypse gave Vienneau two Consume Strength, and Fuller two Coalition Honor Guard. Desolation Angel also found its way to Pustilnik, and was a perfect fit in his black/white/blue deck. Mikey P also picked up a Gerrard's Verdict to add to his discard arsenal. Boeken drafted a Fungal Shambler to give his deck two large monsters, and got a much needed Lay of the Land to help him fix his mana. 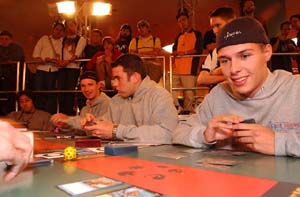 The players built their decks and made their way to the feature match area, and Benafel asked to go to the bathroom while shuffling, and added that Boeken had to go as well. Krakower objected, and wanted to make sure both players didn't leave the table together once the round had started. Rosewater allowed Benafel to leave, and waited for him to come back before Boeken was permitted to leave the Feature Match area.

Fuller tried to use some mind games on Pustilnik as he took his time on a turn, and then pulled aside a judge for a question. Pustilnik was not intimidated, and showed a sarcastic yawn. Pustilnik's board was not very impressive, as he had plenty of land out and many more lands in his hand along with Dead Ringers and Confound. Fuller summoned Dwarven Patrol, Waterspout Elemental and Coalition Honor Guard, and easily won the first game.

Meanwhile, Benafel got a warning for slow play, resulting in some complaints from those at the table wearing ABU shirts. Benafel felt that he should have received a caution, and appealed to Head Judge Collin Jackson, explaining that he had many options to consider when he got the warning. Jackson said he would take it into consideration, and Benafel requested that Colin watch the rest of his match. As this was happening, Boeken won his first game, giving ABU two game wins.

Vienneau's Volcanic Imp was racing against Benafel's Phyrexian Rager, and a Bog Down with kicker left Benafel with no cards in hand. Benafel summoned a Minotaur Illusionist on the following turn. Vienneau took care of the situation with Gaea's Might and blocking with the Trailblazer. The Minotaur shot down the Imp before it could head to the graveyard. Fuller was in his second game against Pustilnik, and once again seemed to have the board in his favor. Pouncing Kavu and Kavu Runner were active in the Red Zone, as Dwarven Patrol waited to untap, and Razorfin Hunter was active. Pustilnik had out Living Airship and Aurora Griffin in the sky, and Benalish Trapper helping out. Vienneau won his first game, giving The Ancient Kavus their first game win of the match.

Boeken had the second game heavily in his favor, thanks to Thornscape Apprentice and Fungal Shambler. Krakower eliminated the Apprentice and took down the Shambler, but Boeken came right back with Amphibious and Alpha Kavu. Krakower used Living Airship and Minotaur Illusionist to stabilize the board, but Armadillo Cloak was played on Amphibious Kavu to bust through the defense. On the other end of the table, Pustilnik used Dead Ringers to kill off the Pouncing Kavu and Kavu Runner, making the board much less threatening. His fliers started to get to work in the Red Zone, while his teammate Vienneau summoned Tek, and had out every basic land type except for plains. The large artifact creature died to Crosis' Charm. 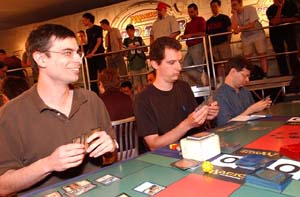 Krakower used Manacles of Decay to stop Boeken's Cloaked Kavu, which gave him a lot more breathing room. Pustilnik continued to be on the offensive, but found himself in a bad situation when his Living Airship was removed with Order. Pustilnik was at a fragile three life points, and Fuller brought out Waterspout Elemental. Gerrard's Verdict forced Fuller to lose Squee's Embrace and Coalition Honor Guard, and Pustilnik followed up by summoning Angel of Mercy, which brought him up to six.

Krakower was slowly getting through Boeken's defense thanks to two fliers and Hooded Kavu, and won the game to go to a third. Pustilnik used Reef Shaman to give himself a mountain and cast Jilt with kicker to leave Fuller with no creatures in play, and attacked for five before playing Coastal Drake. This was enough to give him the second game. Vienneau had his Tower Drake attacking for two a turn, while his Bloodstock stared down Benafel's two Vodalian Zombies. The Tower Drake was eventually stopped by Volcano Imp, and Vienneau used Powerstone Minefield to hold back Benafel's army of 2/2 creatures. His own 3/3s attacked without a problem, and Benafel's creatures could only block and die before combat damage. Benafel summoned Minotaur Illusionist, which was still vulnerable to the Minefield, which does not target creatures. An attack followed, leaving Benafel with only a Zombie, while Vienneau had Tower Drake, and summoned Quirion Trailblazer.

Fuller had Sea Snidd and Pouncing Kavu out in the third game, while Pustilnik had Samite Archer, Stormscape Apprentice and Living Airship. Bog Down with kicker left Fuller with one card in hand, and a Coastal Drake followed to give Pustilnik a four damage clock in the air. At this point Benafel had summoned a Zombie Boa, which could get around Vienneau's Minefield. Boeken brought out Darigaaz against Krakower, and summoned Fungal Shambler on the following turn. Vienneau used Consume Strength to gain back board advantage, and used Magma Burst to finish Benafel off and win his match. This is important to note, since Vienneau claims to "own" Benafel, and "never loses to him".

Pustilnik had the board well under his control, and Fuller used Allied Strategies to draw four cards with the help of a Sea Snidd. Boeken won his match thanks to his two monsters, and time was called. The deciding game was now between Fuller and Pustilnik, who were in extra turns. Fuller had Sea Snidd and Flowstone Charger out, and the Archer blocked and shot down the Charger to trade during Fuller's attack step. The five turns ran out, and the match ended in a draw.