Round 9: Antoine Menard vs. Olivier Ruel

This was a rematch of round six, where they had played each other for the honor of going undefeated through day one. In that game, Antoine had topdecked his second Dirge of Dread to kill Olivier, so Ruel was out for revenge here. His Wake deck should have quite a good chance against Antoine's blue-green madness deck. 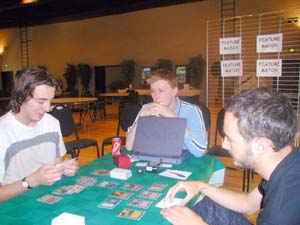 Olivier's version of Wake is a little different in that he has Angel's maindeck, which s becoming more standard, as well as more countermagic. Antoine played a second turn Wild Mongrel, which Olivier countered. Menard then played an Aquamoeba which resolved. He used it to drop a Basking Rootwalla into play.

Olivier made a fairly unmysterious morph, but Antoine just unsummoned it and madnessed out an Arrogant Wurm at the end of turn. His next attack dropped Olivier to seven, so he Cunning Wished for a Moment's Peace to buy a little more time.

He didn't need to use the Moment's Peace straight away, as he drew Memory Lapse which let him force through a Wrath of God. This left Antoine with nothing to do but Circular Logic the replayed Exalted Angel. Ruel made a second one, and with two Moment's Peaces in hand there was nothing Antoine could do. 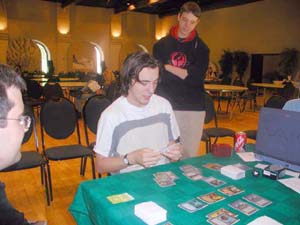 Olivier has an interesting sideboard with four Chastise. He brought all of these in and took out Mirari's Wakes and Miraris, which are next to useless in this matchup anyway.

Antoine cursed under his breath as he drew an opening hand with no lands, and mulliganed into a landless six card hand. The game was all but over before it began as there were no land in his five card hand either. The four card hand was Wild Mongrel, Careful Study, Envelop, Arrogant Wurm, and was also thrown back. "Please mention that I only cut his deck," Olivier joked.

Antoine finally found a three card hand of two lands, Merfolk Looter which he kept, and made the Looter on turn two. Oliver made a morph on turn three, unmorphed on the next turn, and fairly unsurprisingly, Antoine wasn't able to put up much of a fight with his three card hand.