Round 9: Antoine Ruel vs. Kung-Chieh Wang 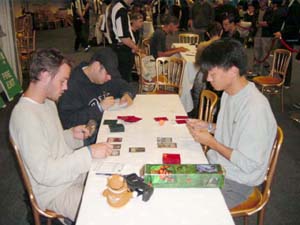 The first match of the day finds these two in a good mood and there is quite a bit of friendly banter before the start of the game. Wang elected to play first and after some thought kept his opening hand. Ruel was unhappy with his hand and chose to mulligan before keeping his hand of six. The mulligan did not seem to have too much of an effect as, true to form, Ruel's deck started to pop out creatures, starting with a Shivan Zombie and following up turn three with a Phyrexian Rager.

Wang had yet to see anything but Islands and on his forth turn failed to drop a land at all. Ruel was keen to take advantage of the situation and added another Phyrexian Rager to his side of the board. Six a turn is a very quick clock and Wang concedes the following turn rather than let a Void from Ruel resolve.

Wang immediately got off to a better start game two by playing a Coastal Tower giving access to two of his colors on the next turn. Ruel again had a turn two drop and this time play a Nightscape Familiar. Ruel followed this up on his next turn with an Addle which is Absorbed in what would become the pattern of the game as Wang had answers for everything Ruel attempted and the following turns saw him counter another Addle, Phyrexian Rager and Skizzik using Excludes on the creatures to maintain his hand size.

After getting Rage and Absorb from an end of turn Fact or Fiction Wang plays a key card in his deck, Goblin Trenches the trenches are empty for a few turns however as Wang continued to use his counter magic to stop Ruel mounting an offense. Another Fact or Fiction nets Wang another Rage. Both Rages are used shortly afterwards, one on a Crypt Angel the other on a Skizzik the angel had recurred. 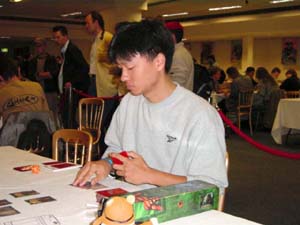 With Ruel seeming spent of threats Wang begins to use the trenches, proudly whipping out his new player reward Goblin Solider token. A Prophetic Bolt helps Wang improve his hand even further while speeding Ruel's demise and when Wang excludes a Phyrexian Rager Ruel is visibly upset, a look in Wang's graveyard reveals why as it contain four Absorbs and three Excludes, a fair amount of counter magic by anyone's standards and when Wang rages twice at the end of the turn with his third and forth rages Ruel concedes to his opponents superior draw.

The third game was another game decided by land issues as Ruel finds himself stuck on the four mana he had in his opening hand for almost the entire game. This was truly remarkable considering that Ruel had a Phyrexian Arena from his sideboard in play and was drawing two cards a turn from turn three onwards. Ruel played a Blazing Specter which resolved and attacked successfully for a few turns. 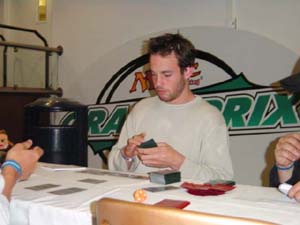 Wang indicated that he had effects at the end of Ruel's turn and thought for a while before aiming a Prophetic Bolt directly at Ruel rather than the attacking specter, a clear indication that he was going to attempt to burn Ruel out. Sure enough another bolt a few turns later dropped Ruel's life total to eight. Ruel finally hit five mana and cast Void hoping to strip some of the burn from Wang's hand but Wang responded by Raging Ruel down to four life from the seven he was on thanks to the arena. The Void was allowed to resolve and Ruel chose three. Wang revealed his hand containing a Breath of Darigaaz, which would seal Ruel's fate next turn and the Frenchman conceded.