Round 9: Anton Jonsson vs. Jan Tomcani 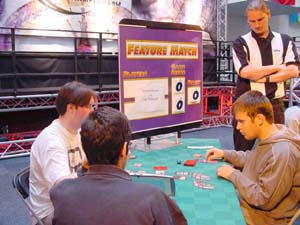 At 6-2 at this point these two can't real afford extra slip-ups. Although this is not a do-or-die round the loser will almost certainly need to ace the remaining rounds.

Jonsson opened with Battlefield Medic and Jan answered with a morph. The Swede Pacified it and sent the Medic in. Still, the Pacified morph wasn't totally useless. It gained some Lavamancer's Skills and shot down the Edict.

Keeping with the "no little guys across the table" policy Tomcani played Consumptive Goo that Anton shot down with Wing Shards. Eager to get back on track, Anton Jonsson laid out Daru Stinger amplifying it for three.

Tomcani slumped in his chair, thought about it for a while and played Vengeful Dead. Clutch of the Undead killed the Pacified and Skilled morph which turned out to be a Fallen Cleric and Anton Jonsson sat behind his Stinger.

Tomcani knew he had to move before Anton's creatures started pouring in. He played Embalmed Brawler and Jonsson answered with Catapult Squad, a morph and Deftblade Elite.

Carbonize took the Squad totally out of the picture and Extra Arms gave the Brawler some extra skills. The Elite-Stinger team went to work as Anton Jonsson worked to control of the Red Zone. 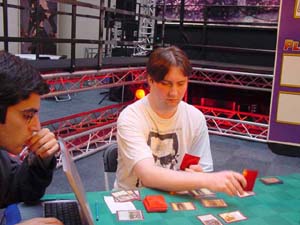 It seemed Tomcani was out of it. His opponent had just laid out Crowd's Favorite and the Elite-Stinger combo was killing a creature per turn. Noticed how I wrote "It seemed"?

Well, before the Favorite could finish the job Tomcani had one final opening. And he had the Enrage to power his remaining creature for just enough to snatch victory from the White jaws of almost certain defeat.

Anton came out fast with Deftblade Elite working the table for a couple of turns before Tomcani played Withered Wretch and a morph. Jonsson answered with Lowland Tracker but Carbonize took care of that.

A morph advised Jan to stop swinging with his creatures. For a few turns they busied themselves improving their armies. When Anton Jonsson's Crowd Favorite survived its first turn it seemed Jonsson would control the table.

Tomcani unmorphed Sootfeather Flock to fly above the blockers and brought Jonsson to ten. Unable to deal with the Favorite he opted for his other out: to swarm in for the final points of damage.

The Slovakian had six creatures, Jonsson had four blockers and eight mana (six untapped when the fourth blocker came into play). Tomcani seemed a bit surprised when Jonsson decided not to tap anyone on the following attack. 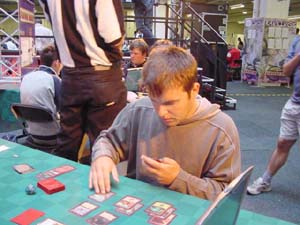 He redid the math a couple of times, stared at the two cards in Jonsson's hand and attacked with only two creatures. Cloudreach Cavalry took out the flock and Jonsson fell to seven (from Gluttonous Zombie).

On the next turn the super-tapper started working on the Fear-powered Zombie, keeping it out of the Red Zone. The turns dragged on as Tomcani tried to find a way to finish the game and Jonsson tried to build a army large enough to hold the Slovakian and go in for the seventeen points of damage.

Tomcani seemed to get there first. His Zombie got tapped and he sent his whole crew in.

It didn't take him too long, actually. The trick up Jan's sleeve was unmorphing Patron of the Wild. Most of Jonsson's army fell right there and then. From there on it was merely academic. Jan had four creatures, Anton had... Deftblade Elite and Wing Shards. Not much of a contest.