With the coveted Day Two draft seat on the line, everything hinged upon this round- the last and final round of Sealed Deck for a very exhausting day. Fortunately, much to everyone’s relief, De Rosa has sworn to try and make this a memorable, if not, then at least an entertaining match. He was quick to keep to his word- when the players failed to turn up a die, more innovative suggestions for deciding who plays came churning out, for example:

“Oh, come on! Do you really want to eat pizza to see who goes first?!” – Antonio de Rosa 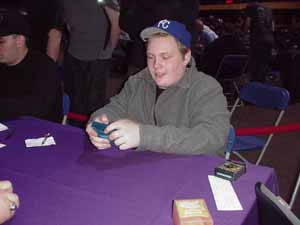 Sparksmith from De Rosa met Wirewood Herald from Hoaen. Both players made a morph on their turn third (and you guys are probably sick of reading this by now) as the battle for board position was fought. Apparently, Hoaen cared little for board advantage, cycling a Dirge of Dread to make his morph unblockable, then flipping over a Haunted Cadaver, sacrificing that for three cards. The Sparksmith shot down the Herald, and when a second morph entered play on De Rosa’s board, it was the perfect illustration of why Haunted Cadaver really isn’t that good. Are you really willing to give up a monstrous amount of board position just for three cards?

The next few turns basically consisted of De Rosa riding this advantage to victory. First, Hoaen’s Fallen Cleric fell to an unmorphed Aphetto Executioner. Then, Leery Fogbeast fell to Rosa’s other morph- Skinthinner. Things would’ve fallen apart by now, if it weren’t for a timely Soulless One from Hoaen, which was a 7/7, no thanks to the fact that both players were utilizing the dark side.

Hoaen expanded his army with Timberwatch Elf and a morph. Not wanting to wait to see what the morph was, De Rosa summoned a Crested Craghorn and killed the morph. The situation grew ever more infuriating for De Rosa. All he just needed something to deal the last five damage to Hoaen. Thankfully, De Rosa was obviously in somebody’s good books, for one knock on the deck, another knock on the table later, Rosa’s face broke into a smile as Searing Flesh went from the top of the deck to the front of Hoaen’s face. 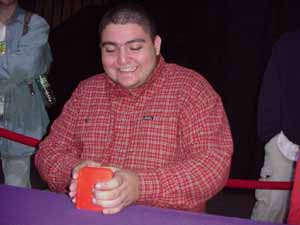 In an attempt to woo the audience, Rosa would like to take these few lines to say “Hi!” to all his lady friends, and to let them know that he will be back, safe and sound come Monday. Roommates too get his attention, although his message is significantly less flattering- “Remember to do the dishes.”

Sparksmith came out on turn two for Rosa, which was matched with a Timberwatch Elf from Hoaen. Nosy Goblin powered the Sparksmith to the point where it could take down the Timberwatch Elf, and the situation looked bleak for Hoaen. Crested Craghorn was like a one-sided Flame Rift thanks to the Sparksmith keeping Hoaen’s side of the board empty. Silent Specter brought out one big “WHA?!”, although that really wasn’t much of a problem with the Craghorn being able to kill it anyway.

“I have a Threaten, but I don’t think that’s the right play.” – Antonio de Rosa
“What? Threatening me down to one isn’t the right play? Whatever you say.” – Richard Hoaen

Right play or not, Threaten convinced the Specter to switch over for a turn, and the resulting attack brought Hoaen down to one. When the creature count reads five to one, and the opponent is at a scant one point of life, it’s pretty darn difficult to lose. One actually has to try and lose from a position like that.