Round 9: Attacking for Two 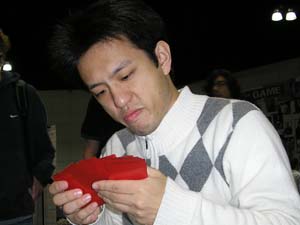 Fujita had plenty of answers in his deck.

it a battle between the fair decks.

While everyone else around them was doing unseemly things with mechanics like storm, dredge, and affinity, these two salty Pro Tour vets were happily spending their turns attacking for two. Both players' decks were one-man creations with little outside input. Raphael Levy, who has two Pro Tour Top 8s in Chicago '99-00 and Worlds '98, was playing an aggressive green-black deck that would sniff at being called Rock. Highlights included Hypnotic Specter, Dark Confidant, and Call of the Herd, not to mention some elven and avian acceleration for the three drops.

Tsuyoshi Fujita was playing Richmond Shogun, a modern retelling of the story of PT Jank. Fujita, who has seen the final table of two Pro Tours, was sporting a Savannah Lions, Hounds, Lavamancers, fiery removal, and a suite of eight land destruction spells. Also playing Fujita's deck in this tournament was Shuhei Nakamura. They were both 7-1 coming into the first round of Day Two action.

Levy led off with a pretty black-bordered Bird of Paradise. Fujita decided to start at 17 in order to play Isamaru, Hound of Konda. No fancy-pants dredging for Levy, who played Call of the Herd on turn two, just like god intended the format to be played. Firebolt shot the bird out of the sky but Hypnotic Specter came online a turn later. Fujita was stuck on his one land and lost Lightning Helix to the reprint. Levy flashed back the Call. 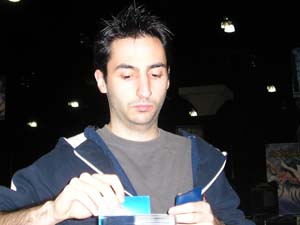 Fujita found land No. 2 and suddenly the momentum swung around in the Japanese player's direction. He killed the freshly flashed back Call token with Lightning Helix and swung over for four points of attack. Levy cast Cabal Therapy naming Lightning Helix and saw two s and two land destruction spells.

Hypnotic Specter snatched one of the land destruction spells and Fujita waited to see if the two Legionnaires in hand were enough of a threat to merit Levy sacrificing a creature on the board. Hypnotic Specter decided to take one for the team. Levy also had Putrefy to take down the legendary dog.

Dark Confidant made a brief appearance but was taken out with a Lava Dart. Fujita Pillaged a green source. The Call traded with Savannah Lions for a flashed-back Lava Dart. Levy was out of gas but Fujita's deck started delivering the goods - two straight Savannah Lions and a Kataki, War's Wage. Levy had nothing but chump blockers.

"Three?" Levy asked as Fujita cracked a fetch land that ultimately resulted in Savannah Lions on the draw. Withered Wretch was in Levy's sideboard for other matchups, but this time stood in the path of Savannah Lions quite nicely. "Only one," laughed Fujita as he fetched a Mountain with his second sac land and Firebolted the cleric. Grim Lavamancer came down.

Pillage took out Levy's third land - a land he had paid two life (and no doubt $20) to play untapped. He Smothered the Lavamancer and both players were waiting for their decks to kick into gear. An Elf from Levy took a Flametongue to the face, as did a Bird on Levy's next turn. Troll Ascetic offered some relief but Levy would have to take eight in order to make that happen - he only had one mana left up after casting it.

He could not go to one so he traded with one of Fujita's seemingly endless Flametongues. His deck gave him nothing on the following turn and he suddenly found himself starting Day Two with his second loss of the tournament.

"If I hadn't played my bird…" he wondered.

In retrospect, if Levy had waited a turn on the bird, Fujita would not have had a second Flametongue target - he could have imprinted it on a Mox he was holding instead. A turn later Levy drew the Troll but didn't have mana to regenerate. With only a Troll in play, Fujita's parade of Flametongues would have languished in his hand.

"I was thinking that if I drew a Sword of and I could put it on the board. Then when I drew the Troll it ended up being real bad. My poor dead bird," said Levy.