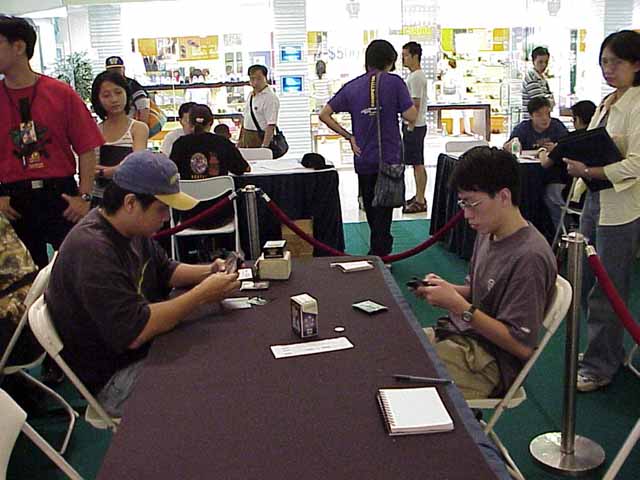 In the previous two years, this event has been dominated by Japanese players. 14 of the 16 final day participants have been from Japan, as have both winners. The year 2000, however, is shaping up differently. Approximately half of the field is Japanese, but going into round 9, the top 10 players in the standings included only 4 Japanese players. Two of the players trying to claim the first Top 8 slot in the history of their respective countries met in the round 9 feature match: Aw Yeong Weng Kwong of Malaysia and Doctor Wong of Taiwan. 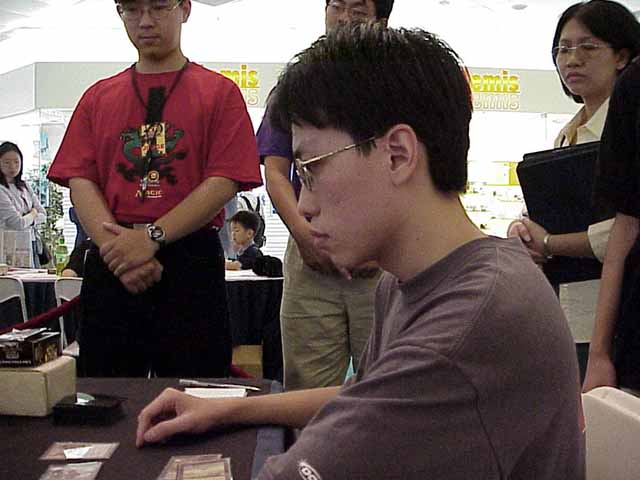 Wong cast a turn 1 Ramosian Sergeant, but he never got to use it since Weng Kwong Duressed away a Disenchant and then used Dark Ritual to cast a turn 2 Engineered Plague (naming "Rebels.") Wong played a Longbow Archers and then Weng Kwong played Phyrexian Negator. Here's were the game got interesting. Wong attacked with the Archers and Weng Kwong elected to take 2 damage. Wong played a 1/1 Fresh Volunteers and Weng Kwong decided he didn't want to attack with his Negator because he might be forced to sacrifice a permanent and he only had three land. Instead, Weng Kwong cast Stupor, knocking a Plains and a Fresh Volunteers out of Wong's hand, leaving him with only Armageddon. Wong top decked a land, played it, and Geddoned.

After the 'Geddon, Weng Kwong's Negator became a liability. It now certainly couldn't block the Archers and it could no longer afford o attack over that 1/1 Volunteer any longer. Wong eventually build up two plains and summoned a second Archers to his side. The Archers cleaned up in a hurry while Weng Kwong failed to draw much land. The game might have played out differently if Weng Kwong had attacked through that 1/1 when he still had land to sacrifice. Wong might then have been forced to leave his Archers back to defend against the Negator and Weng Kwong might have had time to recover from Armageddon. However, he didn't and he didn't.

Game two went much better for Weng Kwong. He Duressed away a Disenchant and cast two early Chimeric Idols. Wong did have a 3/3 Longbow Archer (thanks to Crusade) and a Parallax Wave that allowed him to attack without being counterattacked. However, Weng Kwong's cast Negator and then Eradicate (on the Archers), forcing Wong to use up his Wave fairly quickly. Once Weng Kwong had all his creatures back the game looked stalemated, but that's where Vampiric Tutor comes into play. Wong must have known he was in trouble as soon as Weng Kwong cast it, and he was. Weng Kwong cast Massacre and then Thran Lens to kill all Wong's creatures. His Idols didn't even shrink from the Massacre so he could attack for 9 and then 11. Crunch! 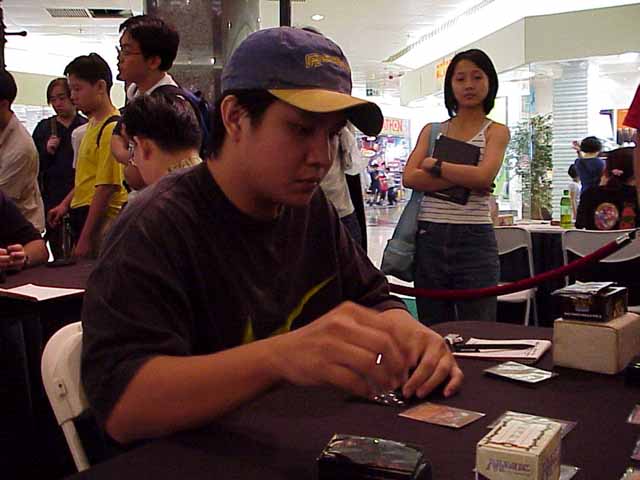 Weng Kwong cast Engineered Plague "Rebels" on turn two (to kill Sergeants) and turn three (to kill Steadfast Guards) a the beginning of game 3. Wong was then reduced to Mother of Runes beatdown for the next few turns. Massacre ended that quickly and Stromgald Cabal promptly ended the rest of Wong's plans. It took Weng Kwong quite a while to draw a creature, but eventually he found Masticore and Chimeric Idol to do his dirty work while the Cabal and those Plagues kept him in control the whole way.