Round 9: Back on His Heels

Pro Tour success may have eluded these two for now, but Antonino De Rosa and Andre Mueller are familiar with the bright lights thanks to their National team performances. De Rosa, the defending U.S. National Champion, squared off against Mueller, a fourth-place German Nationals finisher. Andre has already beaten Jon Finkel during the weekend and it looks like he's working on building a nice little set of U.S. Champs over the course of the weekend. 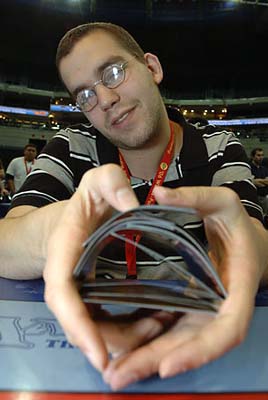 Mueller shows off for the camera.

Antonino won the die roll and chose to play first. Andre had to mulligan, while De Rosa was happy with his opening grip. Andre was pretty happy with his mulligan when it let him play an Azorius Chancery without having to discard on the draw.

Antonino responded with a Spectral Searchlight, and a cry of "get you!" as he burned a tapped-out Mueller. Andre played Lurking Informant and passed.

"That's a good card," said Antonino as he played a Farseek to give him a Swamp, Forest, Island and Plains in play. Andre, with mountains and his Chancery, played out Petrahydrox, but was rather outclassed by Golgari Rotwurm from De Rosa.

Andre continued to be the aggressor, tapping down his opponent's Rotwurm with a forecast Plumes of Peace and attacking. This plan didn't seem as strong though when Antonino played a hasty Gruul Scrapper off his Searchlight, and swung for 10. The life totals were 15-10 in Ant's favour, and even after a Plumes of Peace on the Rotwurm (for real this time), and a Goblin Flectomancer, Andre looked in a little trouble.

He didn't know just how much trouble, but when Tolsimir Wolfblood came down, he was forced to wince and block Antonino's Scrapper with his Petrahydrox. Andre made a Snapping Drake and passed. Antonino continued The Man Plan, with a Simic Ragworm and passed. At the end of turn Mueller peeked at his own library with Lurking Informant, and took a Searchlight ping for his trouble. It did mean that he hit his swamp, but facing down a fat team, he wasn't happy. He made a Rakdos Ickspitter and passed. Ant got a wolf at the end of turn, then sent with all the beaters.

In the interests of self preservation, Andre blocked with his Flectomancer and Informant, dropping to six. He then played a Starfletcher and passed.

Andre made a brief play at psyching Antonino out, but ultimately scooped it up when his Snapping Drake got blocked. He maintained that he had the extra 8 damage in hand had Antonino not blocked, but the point was very much moot. A mind game before Game 2, perhaps? Mueller was backed by a double Schismotivate, but the presence of the Starfletcher ruined any endgame plans.

For Game 2, Andre chose to play, shuffling vigorously all the way. This didn't seem to work for him though, as he was forced to mulligan his opening 6. Antonino kept, but it looked that his draw might have been a little shaky, as he played a Forest and then had to discard. Andre had a Dimir Signet and a Magewright's Stone. 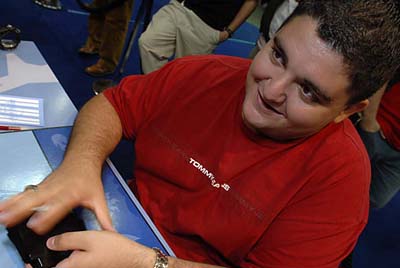 Like a master, Antonino pulled out of his turn's mana issues in winning style, playing a second land and Farseek for a Plains, and two signets on consecutive turns. Andre meanwhile was going for a milling plan with a Vedalken Entrancer to go along with his Stone.

Antonino busted out a Gruul Nodorog and passed. He got milled for four, and then Mueller played an Ogre Savant to Time Walk the U.S. champ. The Nodorog came back down, and was followed by Tolsimir. A Schismotivate from Mueller allowed for a safe block of the Nodorog, and Andre continued to beat, taking Antonino to 13 before making a Snapping Drake, keeping the pressure high.

Tolsimir tried his luck in combat, but was blocked by Vedalken Entrancer, who was in turn taken down by Steamcore Weird. Antonino then played a Silhana Starfletcher, the perfect blocker for Snapping Drake.

Andre drew and rapped his hand on the table.

"Why are you banging? You're winning," remarked a calm De Rosa.

Mueller attacked with his Drake and Savant, and had a second Schismotivate to take down the inevitable Starfletcher block.

Antonino's Steamcore Weird got in for a cheeky 1 point, taking Andre to 19, and big Ant made a big Battering Wurm, who could beat for an uncontested 6 per turn. Andre lost his Savant in a fight with a Wolf token, then played an Orzhov Euthanist, and a Torpid Moloch.

Antonino took another hit from Snapping Drake, going to just 4, then Andre played some Novijen Sages. At the end of the turn a new Wolf came out, and Ant Repealed Snapping Drake. He then got to smash in for 6, play a Golgari Rotwurm and a Farseek for a Swamp.

"Why not?" remarked a dejected Mueller who could see things slipping from his grasp.

He was forced to draw cards in desperation with his Sages to deal with the more than lethal "attack and sac" plan on the other side of the board. Sensing the end was close, Antonino was itching to get to his attack step, but it seemed that the German had one last trick. Ribbons of the Night on Tolsimir Wolfblood dramatically changed the face of Antonino's board, and gave some much needed life to Mueller.

Ultimately, this just bought Andre an extra turn though, and when that turn ended on him losing to a big attack, Antonino got to relax back into his "fun-loving happy Italian American, sportsmanlike, gentlemanly, single and looking" role. The game face could be put away; at least until the next draft, in which he would sit at 7-2, in good position to fight for Top 8.