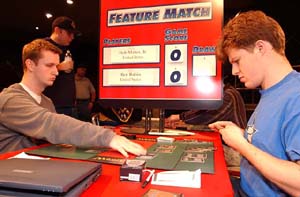 The typical Rochester grousing started as soon as I sat down ... Maher informed me that "Ben has one of my Zealots in his deck." Bob Maher and Ben Rubin are each 5-2-1 and each need to rattle off five wins if they want to put up yet another Top 8. Money, PT Points, and pride are at stake in just about every match on day 2 of a Pro Tour. See coverage of their draft here.

Maher drafted one of the color combinations most pros frown upon - red/white. Rubin went for green-blue, a combo many players like but feel is too hard to get because you'll always be fighting for your colors. Maher played a turn 2 Minotaur Explorer, losing Firebolt at random from his hand. Rubin Repelled it making Maher recast it and that time he just lost a Plains. Rubin's next attempt to deal with the Minotaur was with a surprise 4/4 Beast token. Maher used Embolden to save his 3/3 and Chainflinger to finish off the beast. On the next turn Rubin and Maher repeated the same little dance, each flashing back his spell. 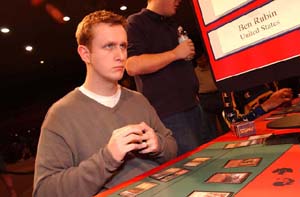 Rubin's third trick was even better: Bearscape came down and Rites of Spring dumped a bunch of cards into his graveyard to fuel it. That pretty much stabilized the ground, but Rubin found himself on just 6 life with Chainflinger on his opponent's side of the board. Maher also had both Shower of Coals and Liquid Fire in his hand, but he had just five lands, and only one was a Mountain. Maher went for the kill by sacrificing an Abandoned Outpost to play Shower of Coals and blast a path through Rubin's defense, but Rubin had Moment's Peace ready and thus the only damage he took was the two from the Shower itself. Sacrificing that land meant Maher now had to top-decked two more to play Liquid Fire or survive four more turns to win with Chainflinger. Rubin didn't give him enough time to do either because he played Repel on Minotaur Explorer two more times.

Game 2 was vicious. Maher once again came out fast and this time his creatures didn't force him to discard his good cards. Patrol Hound and Pardic Firecat kept going over while Shower of Coals and Acceptable Losses killed all Rubin's creatures between them. When Maher played Anarchist, Rubin didn't even give him time to pick up Shower of Coals - he was already shuffling up for game 3. Whereas game 1 lasted about half an hour, game 2 took maybe 4 minutes. 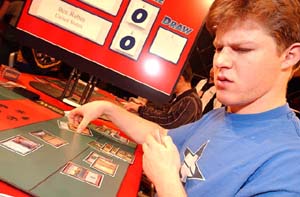 Maher released the Hounds early once again in game 3. Patrol Hound times two just kept going over an Rubin couldn't find anything bigger than 2/2 to block with. Bearscape was eventually able to make enough 2/2's that Maher didn't want to fight any more. Always in complete awareness of the implications of his cards, Rubin kept sending his 2/2's at Maher, forcing Maher to block and discard cards to first strike them down. This put Rubin's guys into his graveyard where he could turn them into Bears and net 0.5 cards worth of card advantage each time. Cephalid Scout threatened to speed up Rubin's resource conversion engine dramatically so Maher immediately blasted it off the board with Liquid Fire. A second Liquid Fire dealt sent 5 more damage straight at Rubin's head and suddenly Rubin's life total was precariously low. He was up to four bear tokens, but two Patrol Hounds stared across the board at them, threatening to pick off two if Rubin attacked. When Maher hit threshold, Rubin had to spend his time Dematerializing a Mystic Visionary, but then Maher just drew a Scorching Missile and finished him off.