Round 9: Ben Rubin vs. Darwin Kastle 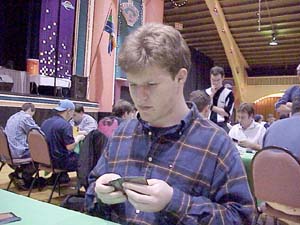 Ben RubinBen Rubin has been playing Magic long enough that he's considered one of the veterans of the Pro Tour. He's still only 19, but his first Top 8 was four years ago and he's won over $100,000 in his career. Darwin Kastle's resume dates all the way back to the very beginning of the Pro Tour and he's one of the few players from season one still playing regularly. With ten PT Top 8's between them, this was quite a clash of the titans. Rubin drafted blue-white with just a splash of black. Kastle opted for black-blue.

Game 1 was all about Stern Judge. Rubin did his best to hold off Kastle's attackers with Skywing Aven, Blessed Orator, and Second Thoughts while Kastle did his best to remove all Rubin's blockers with Faceless Butcher and Psionic Gift. Kastle needed to race a Judge that was dishing out 4 points of punishment each turn. It looked like the Your Move Games regular might pull it off, and he used his Butcher to deal with Blessed Orator (not Stern Judge) because he saw the end in sight, but Rubin played one Swamp of his own so he could play both Ghastly Demise and Second Thoughts during the crucial last attack. That preserved Rubin's last two points of life and won him the game. 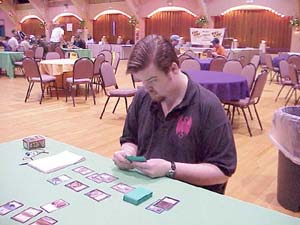 Darwin KastleRubin had turn 3 Stern Judge again in game 2, but this time Kastle immediately Butchered it. Rubin stalled the game for a while with his Blessed orator, but Kastle used his Bloodcurdler to fill up his graveyard and then dropped a 5/5 Mortivore followed by a Balshan Collaborator. I thought Rubin might consider a concession at this point so he'd have time to win game 3, but he fought valiantly. His deck delivered up Wayward Angel plus two copies of Second Thoughts and t was a game again. Kastle would have been in trouble except he has Malevolent Awakening in play, which allowed him to fizzle Second Thoughts and retrieve his best creatures. Rubin urged Kastle to play faster, but Kastle seemed content just to make sure he won game 2. Once Rubin realized they had no chance to play a third game, he settled back down to his normal pace. Or, perhaps Rubin slowed down because he had already pressured Kastle into making the mistake he needed him to make. Kastle kept finding better things to do than replay his Mortivore and he went for the kill with face of fear only to realize after tapping out and discarding a card that Rubin could simply sac a land to achieve threshold and turn his Wayward Angel black. "Crap ... I messed up this game" was all Kastle could say. Rubin then made a mistake of his own, not realizing his Angel would gain trample, but all that did was give Kastle one extra turn that he couldn't do anything with.