"So you're not going to Portland?" Conley Woods asked his opponent as they sat down, undefeated, for the ninth round of play.

"I'm not sure," Brad Nelson replied. "It depends on how I do here. I haven't booked a ticket yet."

"Well, good luck, broham," Woods concluded as they finished shuffling and got underway. 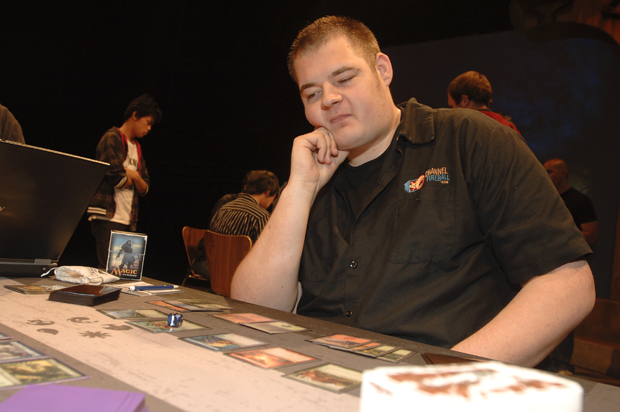 Conley Woods attempts to apply the half nelson.

Nelson started on the play with a Forest, casting Sylvan Ranger on his second turn. Conley, who had gone first, cast Cultivate on his third turn, a play his opponent predicted as he tapped three mana. Throughout the course of the weekend in Amsterdam, green as a color has generally been downplayed as the weakest in Magic 2011 draft. But at the 8-0 table, both Conley and Brad seemed happy to start it, regardless of the conventional wisdom of their peers.

The first flying creature to the table came for Brad, who cast a Cloud Elemental. Conley, boosted in the mana department by his Cultivate, fired back with Protean Hydra but Nelson was ready with another threat of his own in the form of Conundrum Sphinx. A Magma Phoenix for Woods stared the 4/4 down, and a Giant Spider for Brad clogged the skies significantly. But the intrepid Conley Woods didn't seem to care, sending his Phoenix across and dinging his opponent to put the score 17-13 in his favor. Postcombat, he cast Yavimaya Wurm.

Wurm answered Wurm as one of the Spined variety joined Nelson's side of the battlefield, and Brad was also able to crack for 6 with his Cloud Elemental and Sphinx. It was a battle of titans as both players started tossing creature after creature to the field. A Cudgel Troll from Brad was met with Brindle Boar and Cloud Elemental from his opponent. A Jace's Ingenuity from Brad gave him an edge on cards, and he laughed as he drew for the turn after casting it.

"What are we doing?" He said with a hearty grin, trying to figure out the correct action on the increasingly complicated table.

After turns of the two Americans maneuvering with one another to gain an advantage, Nelson made a move. He declared an attack with Cudgel Troll, two Spineless Wurm, Conundrum Sphinx, Sacred Wolf, Sylvan Ranger, and Cloud Elemental. Conley blocked a Spined Wurm with Sylvan Ranger, the second 5/4 with Magma Phoenix, Conundrum Sphinx with Cloud Elemental, and Sacred Wolf with Brindle Boar. Before damage he sacrificed the Boar. Brad used Diminish to shrink his own Spined Wurm being blocked by Magma Phoenix, and when combat cleared, Conley was at 8 with a board of just Yavimaya Wurm, Protean Hydra, and Magma Phoenix.

A second mega-swing back by Brad Nelson looked bad for Conley Woods who tried to figure out a method of blocking that would allow him to live. Humorously when Brad's Conundrum Sphinx triggered, Conley named "Chandra's Outrage" in an effort to find a spell that would impact the board. Nelson named Negate. Neither player found what they were looking for, and when Woods tried to line up blocks that would let him live, he realized he was a goner.

Sylvan Ranger was first to the battlefield in the second game, entering for Conley Woods. Prodigal Pyromancer hit the following turn for the American, while his opponent had a Scroll Thief as his first threat. The 1/3 was enough to stall the game on the ground until Conley cast a Cudgel Troll. That was a chubby enough body to start bashing in, and Brad was soon down to 13.

But he wasn't giving up without a fight. He cast Cloud Elemental and Giant Spider to help him stay in things, and he traded the Spider to destroy a Canyon Minotaur from Conley with the help of Scroll Thief. Woods's Prodigal Pyromancer finished off the Spider, but even though Nelson managed to draw Conundrum Sphinx he was in bad shape. Conley's Cudgel Troll was running ravage on the ground, and he had brought his opponent to 4, within range of his 1/1 pinger. 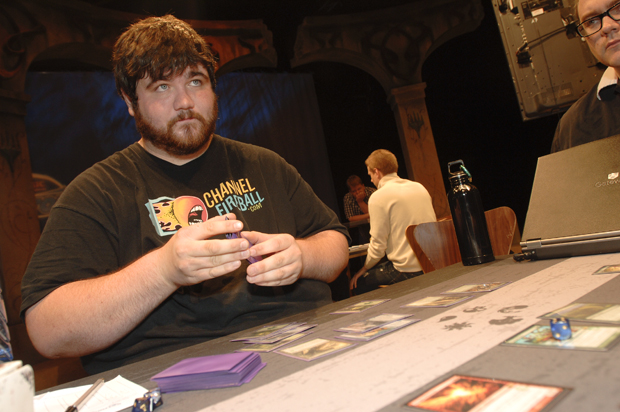 Brad Nelson isn't out of the woods yet.

"Don't say 'OK' next time," Woods chided his opponent, after Nelson had initially taken a pass on the creature, then checked his opponent's mana and realized he could counter with Mana Leak.

Nelson pressed in with his flyers, leaving himself with no blockers but putting Conley to dead in a turn. The problem with the play? Brad would be dead to his opponent's return fire attack. Conley sent his team sideways but was blown out by a Fog.

"You're going to FOG me?" Woods said, incredulous.

After the game, two interesting plays regarding Brad Nelson's Conundrum Sphinx came to light. The first involved his naming of "Negate" in the first game; he actually already had the instant in his hand, but gave Conley the impression he needed to draw it by naming the card. The second play came in the final game of the match. With their podmate Brian Kibler watching, Nelson named "Triskelion" as the card he was hoping to draw, ultimately whiffing. After the match Kibler questioned privately whether Nelson had said that simply to make Brian wonder if Brad actually had the card in his deck, potentially forcing Brian to play around it later in the tournament if they were paired.