Round 9: Bob Maher vs. Igor Frayman 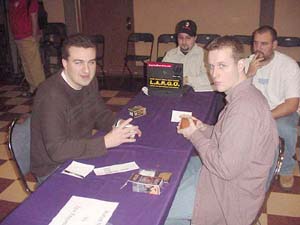 Coming off of the first Rochester draft of the day, these two capable players got paired up for the first match of Sunday morning. Daylight savings time had afforded each an extra hour of sleep, which showed in the bright and bubbly countenances they brought to the table.

The match drew a huge crowd, including Chris Pikula, "Turbo" Bob Wagner, Neil Reeves, and about two dozen other people. Igor won the coin flip and chose to play first.

Although Igor opted to play, Bob started fast and furious by cycling a land on the first turn, and playing Wirewood Elf on turn two. Igor stalled on two lands, but was able to raise a Boneknitter to stall Bob's freshly summoned morph critter. Bob continued to play lands and morph creatures, with Frayman's third land being a cycling land which came into play tapped.

Things continued going down hill for the California player. Not only did Bob unmorph a Skirk Commando to kill the zombie, but he also dropped a Dwarven Blastminer to play land destruction! Luckily Igor had a Swat to take care of the bothersome dwarf.

It didn't look good as Igor continued to draw no lands, and Bob cast Symbiotic Beast. A last minute morphed blocker got the Shock treatment, and Igor went down in flames without ever having gotten past three lands.

By this point, Ken Krouner, Dave Bartholow and Mike Flores wandered around the table, whispering in hushed tones and making secretive jokes about the match. Their tone was in contrast with the somber shuffling going on at the table with the actual competitors. Igor in particular seemed downcast, his deck having failed to produce for him in Game 1. 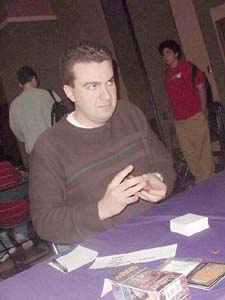 Bob, on the other hand, was making arrangements for checking out of his hotel room at noon.

Chris Pikula: "You know who's the most random person I ever found sleeping in my room at a Pro Tour? Nate Clarke."
Bob: "Who would be the worst?"
Chris: "Jack Stanton, because you could never wake him up."

This game began with Wellwisher on the side of the Great One, and a morphed mystery meat on the Californian's side. Maher went on full D with a Wall of Mulch, and shocked the morpher (which ended up being Haunted Cadaver) once Igor played Wretched Anurid.

Fortunately for Frayman, he drew plenty of lands this game, and dropped morph creature #2—which was promptly shocked as well! Bob happily brought out Goblin Machinist, which had nearly brought him to an undefeated record the day before. Igor's answer was Dive Bomber.

Would Bob trade the Machinist for the Dive Bomber and the Anurid? That scenario never came about, as he enchanted the huge Goblin with Crown of Fury, making it nearly unkillable. The first swing it took, did three points of damage. Igor attempted to race with Dive Bomber, but Bob had already brought himself to twenty-four with his elf. 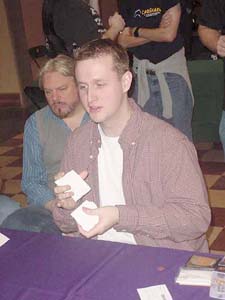 The beasts just kept on coming for Maher Jr, with Barkhide Mauler, joining the fray. Just as it looked all hope would be lost, Igor murdered the Machinist with Cruel Revival, getting back his Haunted Cadaver from earlier. Bob, unfrayed, swung with his 4/4, which was promptly double blocked by the morphed Cadaver and the Wretched Anurid. Pinpoint Avalanche took out the larger blocker, giving Maher two for one advantage. The Mauler died on the next attack, blocked by the Dive Bomber.

Although Igor staunched the flow of blood by winning two straight coin flips, but Bob drew Solar Blast to win the game.