Round 9: Brian Kibler vs. Neil Reeves

Both Brian Kibler and Neil Reeves were looking a little rough around the edges as they took their seats at the Feature Match table. Kibler brought with him a pair of high-energy drinks and his Discman, blaring what Reeves described as "hippie music". Reeves was in classic form also, with toothpick and baseball cap. It was no surprise to see two such giants of the game in the thick of it for Day 2. The twist on things was that Reeves was playing a card-for-card copy of Kibler's black-white control deck. 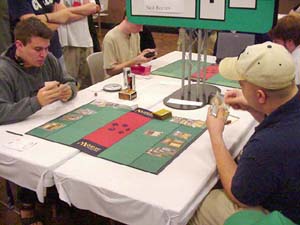 "He won't tell me what to Therapy for in the mirror! That hardly seems fair." – Neil Reeves

They were all ready to start the fireworks, but they had to wait out a deck check.

The decks came back with a warning for Reeves.

"I wasn't even gonna play, but Bob registered my deck and bought me a badge, so I couldn't sleep in. Well he registered Cabal Therapy as 'Therapy', which at the Pro Tour is a game loss. Here it's just a warning. I would have had to beat him down otherwise, cause a scene." – Neil Reeves

Reeves won the roll. Kibler looked at him.

"I'm gonna play, is that right? I need some pointers." – Neil Reeves

Reeves mulliganed to six, and they were off. Reeves showed an early Eternal Dragon, and then an Undead Gladiator, each time earning a "How lucky!" from Kibler.

"I take it these two cards are important in this matchup?" – Neil Reeves

Reeves was set to go nuts with his recursive cyclers. Kibler Therapied him naming Decree of Justice, and Reeves nodded. "At least now I know what to name." It missed, seeing a hand of Exalted Angel, Cabal Therapy, Eternal Dragon, Undead Gladiator and Temple of the False God. Kibler took the opportunity to play a face-down Angel. Reeves cycled into the Vengeance like a pro.

Reeves cycled and returned Undead Gladiator, then swung with his Angel. He played the Gladiator and used it to flash back Cabal Therapy, checking for Decree of Justice. Kibler had only lands and useless Smothers in hand. He ripped a Vengeance on his turn to get the Angel off the board. 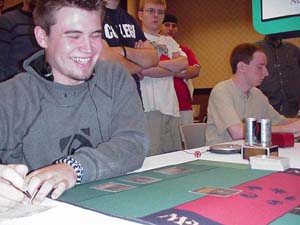 Reeves replaced it with Eternal Dragon. It got in and Kibler showed that he'd just pulled up a Decree of Justice. He flashed back Cabal Therapy to get the other Dragon out of Reeves's hand and hoped for a pull that would deal with the threat on board. It didn't come, and they were on to Game 2.

"So you gonna tell me how to board?" – Neil Reeves

"You bring in Sphere of Law and Wipe Clean." – Brian Kibler

"For your opponent's Sphere of Law." – Brian Kibler

"Are you trying to trick me? I was gonna bring in Wipe Clean." – Neil Reeves

Reeves sent back his opening hand in Game 2, and almost immediately went down to five cards.

"I'm tricky that way. I gave everyone my deck, but with one less land so they'd all get manascrewed." – Brian Kibler

He stayed on a hand of four land and Haunting Echoes. Kibler Therapied for Cabal Interrogator and was pleased with what he saw. However, he forgot that Reeves was The Master, and ripped an Interrogator right off the top after cycling Secluded Steppe.

Kibler had one of his own, and they picked at each others hands. On turn five Reeves had Temple of the False God, and Interrogated for two. Kibler responded by drawing three with Skeletal Scrying, losing a Haunting Echoes. The remaining mana Reeves spent on a morphed Angel. 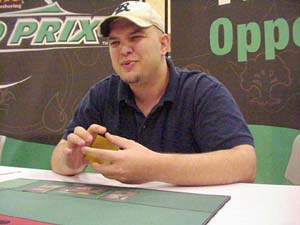 Kibler matched his morph, but lacked the second plains to turn it up. Reeves swung, and then Interrogated away Skeletal Scrying. He cycled his Eternal Dragon for a plains and played it, leaving himself empty-handed. Kibler failed to draw a plains. A turn later he cycled Decree of Justice for a man in response to Reeves's Cabal Interrogator activation. It gave him the plains he needed, and Reeves stripped it. He turned over his Angel and smashed Kibler. Kibler furiously worked his Undead Gladiator to get to a plains.

At seven life, he found Eternal Dragon and cycled it to get a second plains. He didn't have enough left to flip it up. Reeves pinned his hand and brought him to three. For two turns they traded Angel hits, with Kibler realizing late that the die on the table was a man from Decree of Justice. Reeves broke the refrain with a Haunting Echoes, leaving Kibler with a library of lands, Interrogators, Angels, Smothers, and a Renewed Faith.

Kibler drew, swung in, and played a morph and an Interrogator. It didn't matter.

He got one hit in with his team before Reeves brought back Eternal Dragon and shut down his offense entirely. Soon Reeves had a second Angel on defense and the Dragon was free to swing. Kibler scooped rather than prolong the inevitable.