Round 9: Champion a Champion?

While the two players who sat down for the Round 9 feature match were not at the very top of the standings their resumes were simply too strong to ignore. Japan's Makihito Mihara is the reigning World Champion while his opponent, American Mike Hron is a 2007 Pro Tour champion (Geneva) and Limited mastermind. 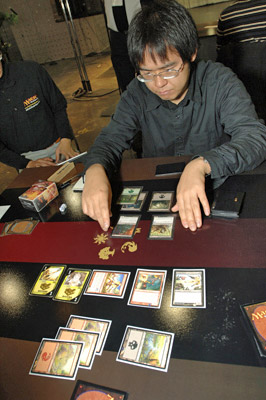 Makihito Mihara concentrates intensely—but then, we've never seen him *not* concentrating intensely.Hron was on the play for the match, opening on turn-two Smokebraider. Not to be outdone, Mihara ran out a Squeaking Pie Sneak revealing Spiderwig Boggart. On his third turn Makihito attacked with the fear creature before playing a Ghostly Changeling. Hron, who had used his third turn to play a Ceaseless Searblades thanks to his Smokebraider, surveyed the board before opting to attack with the Searblades and play a Marsh Flitter. The life totals were 18-all when he passed the turn.

Mihara surveyed the board. Because Marsh Flitter was black his Squeaking Pie Sneak was slightly less sneaky. Did he want to attack with the Ghostly Changeling, which he could afford to pump once thanks to his two Swamps and single Forest? Finally he turned the Shapeshifter sideways, staring his opponent down as if willing him to block. Hron didn't bite, falling to 16 and seeming unimpressed when his opponent played another Squeaking Pie Sneak post-combat, revealing the Spiderwig Boggart again. Unfortunately for the Japanese player he did not have a fourth land drop to go with the Pie Sneak and when his American opponent played an Inner-Flame Acolyte, things were not looking good for the World Champion.

Hron attacked with Marsh Flitter, Searblades, and the Acolyte, and Mihara opted to block Acolyte with his newest Pie Sneak. Hron had a Peppersmoke for the 2/2 and even cantripped thanks to the Flitter meaning Mike had effectively traded just a black mana for the Goblin. Surprisingly Mihara didn't seem too phased using his turn to attack with both his Ghostly Changing and the original Pie Sneak. After considering things for just a few seconds Hron opted to take the damage, making things 14-12 in the Japanese player's favor. After combat Mihara revealed why he wasn't fazed: he made his land drop (a Plains) and added Doran the Siege Tower to the board.

Mike battled right back, sending a team of Ceaseless Searblades, Marsh Flitter, a Goblin Warrior token, Smokebraider, and Inner-Flame Acolyte into combat. Mihara quickly placed Doran in front of the 2/4, but Hron had a second Peppersmoke which combined to kill the 0/5 and leave his opponent backpedaling. Post-combat he made a Tarfire, axing Ghostly Changeling, and Mihara had to sit on his turn, holding his Squeaking Pie Sneak back for defense and playing a Harpoon Sniper.

Sensing the momentum in his court, Hron turned all of his creatures sideways. Mihara blocked Smokebraider with his Harpoon Sniper and Inner-Flame Acolyte with the Sneak, killing both creatures but taking three in the process. Post-combat Hron made an Adder-Staff Boggart, losing the clash, and Mihara shipped a Kithkin Greatheart to the bottom of his library.

That turned out to be a wise decision as his draw step yielded a second Plains that allowed him to play Avian Changeling with mana up to activate Harpoon Sniper should he need, and after getting the turn back, Hron went into the tank during his pre-combat main phase. The seconds ticked by as the Wisconsin native flicked the cards around in his hand, carefully trying to craft the best combat step possible. Confident no attack would end well for him, he shipped the turn. Mihara drew a card, then quickly turned his Avian Changeling sideways, signaling he was unafraid to attack even at just 6 life. Post-combat he played Kinsbaile Balloonist, then passed with the totals 10-6 with the American leading.

Mike's draw step yielded a doozy: Caterwauling Boggart. The seemingly innocuous 2/2 prevented Mihara from blocking either the Adder-Staff Boggart or the two Goblin tokens unless he double teamed, but he opted to block Marsh Flitter with just Kinsbaile Balloonist instead. Sensing tricks from the Harpoon Sniper, Hron passed priority. Mihara had nothing, allowing the Flitter to die and dropping to 2 life. After combat damage had resolved he blew up the Adder-Staff with the Harpoon Sniper. Having the turn back himself, he attacked with his changeling to make it 8-2, but Hron had another threat for his turn: Incandescent Soulstoke. Mihara was unimpressed and played a Kinsbaile Skirmisher before attacking for 5. When Hron was unable to get through in his next combat step for lethal, he packed it in.

The two players sat in silence as they shuffled for Game 2, though whether it was because of a language barrier or simply the quiet nature of both champions wasn't clear.

Both players kept their opening hands, with Hron quickly getting onto the board with Fire-Belly Changeling. Mihara's answer, Kinsbaile Skirmisher, sat back on defense. Hron failed to make a turn three play, though he did make his land drop. Mihara didn't have that problem, adding a Kithkin Healer to the board, but at the end of his turn, Hron hesitated as though he had an instant in hand to play. For whatever reason he opted not to, instead untapping into Inner-Flame Acolyte, which got in unscathed and put Mihara to 16.

The totals wouldn't stay that way for long, however, as Mihara cracked right back with his Skirmisher. Because Hron only had a Swamp untapped he couldn't block with his Fire-Belly Changeling favorably and instead took the damage. Makihito then added Hillcomber Giant to the board, but that was quickly dispelled by an Eyeblight's Ending from Hron.

After a few more turns of play the totals stood 18-12 in favor of the American and the board was Mihara's Kinsbaile Balloonist and four lands against Hron's six lands, Incandescent Soulstoke, and Inner-Flame Acolyte. Making things worse for the Japanese player was the fact that he hadn't drawn a Forest yet and that Hron's next play was Caterwauling Boggart, preventing the Balloonist, Mihara's only creature, from blocking. Not satisfied with that, the Japanese player used a Nameless Inversion on the Boggart then traded his flyer for the Soulstoke before playing a Harpoon Sniper. Makihito desperately needed to stabilize against his opponent, who was far ahead in the race to the tune of 18-7. 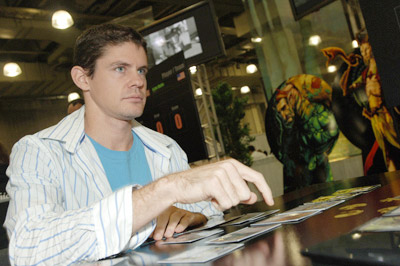 Mike Hron fights fiercely.A Kithkin Harbinger for Nameless Inversion seemed to set him on exactly that course as Hron stopped making plays, apparently going through some mana flood. Unfortunately for the Japanese player he was actually sandbagging a Goat Napper, waiting for his opponent to play an Avian Changeling. A potentially greedy attack with his Kithkin Harbinger before playing the 2/2 Shapeshifter gave Hron exactly the window he needed: he goatnapped Mihara's Avian Changeling and bashed with his Acolyte and the 2/2 to put Mihara at 3.

After that, however, Makihito managed to stabilize. A cavalcade of blockers hit for him, including an enhanced Kithkin Greatheart, and his defensive hordes allowed him to start getting through with his Avian Changeling. Hron continued to miss having plays, and the one play he did make, a second Caterwauling Boggart, ate it to a Nameless Inversion. Before long he was down to just 6 life, and an Oblivion Ring from his opponent targeting an Adder-Staff Boggart put him near death. When his draw step yielded Quill-Slinger Boggart, an effective blank, he quickly scooped up his lands and extended his hand.

"Good luck." Hron offered, gracious in defeat despite losing both games while his opponent was at the narrowest of life margins.