Round 9: Chang Chua vs. Ben Seck 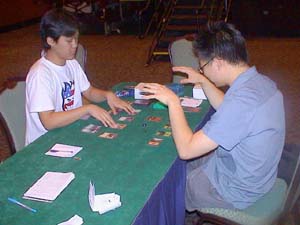 Chang Chua is on-pace for a second Grand Prix Top 8. In his way is Ben Seck, Australian and rakish gadabout. Chua is running a straightforward blue-white deck. Seck's deck runs a ridiculous assortment of little beaters backed by enhancers and the Rites of Initiation - Demoralize kill.

Seck started things off with a mulligan and pulled up a mediocre six. He brought nothing to the table until a turn-three Hell-Bent Raider. Chua had meanwhile mustered Testament of Faith, Escape Artist and Angelic Wall.

The stall favored Chua. Seck made Krosan Constrictor and Woody the Woodland Druid. Chua fortified with Stern Judge. Seck shrugged and sent his Ogres into the Red Zone. Flame Burst meant both Judge and Wall fell, along with the Constrictor. Chua upped the ante with Posessed Nomad. Seck nodded. "I did pass it to you", he said.

Chua started beating. Seck tried to do the same, randomly discarding land to push his Raider past Chua's defenders, but he was hardly keeping up. His Acorn Harvest gave him enough men to gang-block the Nomad. Chua showed him Spirit Flare to wreck him. All Seck could manage was a quiet "How embarassing."

From there, Seck had no way out. Chua eagerly took five from Blazing Salvo to save his Nomad, and it continued smashing until Seck succumbed.

Both sideboarded in four cards. Seck brought in Crackling Clubs to take out Chua's one-toughness dudes as well as Pardic Lancers for some extra fat. Chua traded in some of his more expensive spells for early blockers like more Stern Judges. 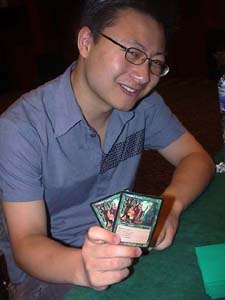 But then Chua brought out the fustigation with Psionic Gift on the Judge, completely jamming up Seck's Werebear and Acorn Harvest plans. He cast the Harvest anyways, just to spare himself some damage. Chua took to the skies with Treetop Sentinel. Seck held back, giving Woody a Crackling Club.

His next draw was high octane, however. Balthor the Stout made his Hell-Bent Raider a de facto killing machine. The Raider hit for three, and then five. Chua stood at eleven. The Sentinel hit again. Chua made a Looter and sat on Spirit Flare mana.

Seck decided it was time to ruin his day. He cast Demoralize, pitching to make his Raider pro-white and achieving threshold. He swung with all his guys. Chua tried Spirit Flare on the Judge to shoot Balthor, but Seck just used his Barbarian Ring in response. Chua fell to three. 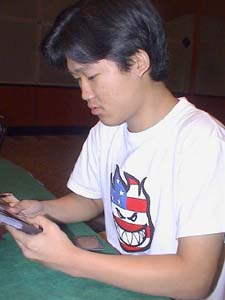 He fought gamely, chump blocking turn after turn with Escape Artist. However, since he was locked at one card, it was only a matter of time. Eventually Seck attacked with more men than Chua had blockers, and Muscle Burst sealed the deal.

Seck was all removal in the third game. Crackling Club for Escape Artist, then Flame Burst for Looter, but something was amiss. It was the fact that Seck had stopped on two mountains. Chua was not likewise hindered. He made a Posessed Nomad and then a replacement Looter. Seck's Mad Dog was not up to the task.

By the time he drew his fourth land, Seck was facing extermination. He nevertheless remained gracious, extending the hand to his opponent.

Afterwards Seck revealed he kept his draw hoping for a forest. He had Acorn Harvest, Rites of Initiation and Demoralize. A quick kill with the right draws.