Round 9: Chikara Nakajima vs. Kazuhiko Mitsuya 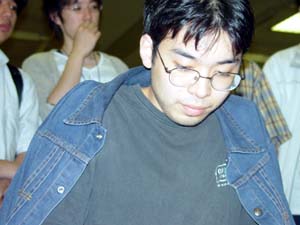 Kazuhiko Mitsuya has been here before. He has won the National Championship and is seeking to represent Japan again. But he's pitting off against his good friend Chikara Nakajima. Both players were smiling and jovial, though both wish they weren't facing each other. Mitsuya's Black/Blue deck has many of Fifth Dawn's powerful Sunburst Cards, as does Nakajima. With such a recent release, this match will be a good opportunity to see the mechanic at its best.

Nakajima won the die roll and took a mulligan, and kept a hand that included two Blind Creepers, but only a single swamp and no forests. He rapped his deck and drew a Forest, playing a Blind Crawler. Mitsuya played a Vault of Whispers and Talisman of Domination. Nakajima attacked for 3 and played the second Creeper. Mitsuya's face fell. "Sugoi, ne!" ("Wow, that's good!")

Mitsuya worked at turning the game around by playing a Chittering Rat. The Creepers kept the assault on, dropping Mitsuya to 11. Mitsuya had no play on his fourth turn other than a Seat of the Synod, and Nakajima attacked happily. But Mitsuya played a Scale of Chiss-Goria as an instant for free, shrinking the Creepers and allowing the Chittering Rat to kill one and survive. Nakajima recruited a Tel-Jilad Wolf to his army. Mitsuya bolstered his defense by playing a Spire Golem. Nakajima threw a Vulshok Morningstar down and equipped the Wolf, sending the 4/4 into the Red Zone. Mitsuya bore the damage, dropping down to 9. He played a Trinket Mage and fetched a Wayfarer's Bauble, playing it.

Nakajima attacked with his 4/4 Wolf. Seeing an opportunity to finally kill the artifact-hating Wolf for good, Mitsuya blocked it with both the Chittering Rats and the Trinket Mage. But Nakajima had the Baton of Courage (for 2 counters). Despite having a Scale of Chiss-Goria on the table, Mitsuya could not answer the Wolf. He dropped a Goblin Dirigible and an Arcbound Slith, but that wouldn't help. A Devour in Shadow cleared the Goblin Dirigible away, and Nakajima renewed his offensive. He passed the Morningstar over to the Creeper, leaving the Wolf open to an Electrostatic Bolt. But a Golden Myr and Leonin Bola kept the Spire Golem out of action, and Nakajima got the kill.

In between games, Mitsuya removed a Necrogen Spellbomb for an Unforge.

Nakajima was forced to mulligan not once, but twice in this game, as he drew only one land and expensive spells in both initial hands. His next draw of five had two land and a Vulshok Morningstar, and he was content to stick with that and two expensive creatures. Mitsuya played his Talisman of Domination again on the second turn, and Nakajima played his Vulshok Morningstar. Mitsuya made a third turn Spire Golem, and then played an Acquire! Nakajima proffered his deck to his opponent, who parsed through and chose to take Altar of Shadows. Nakajima had to get a quick burst of tempo or an artifact removal spell, and none came. Mitsuya got enough mana to get the Altar online on turn 6, and Nakajima quickly scooped two turns later.

After the quick slaughter, the ice was broken and the two joked about how the last game was quite the bore. Nakajima did not expect Acquire at all, and he certainly didn't expect Mitsuya to take the Altar. Mitsuya noted that he only had land in his hand, so he figured he had the luxury of time to develop his board while wiping away creatures. But the next game would prove to be a hot, involved affair.

With an Electrostatic Bolt and a Suntouched Myr in hand, Mitsuya decided to simply play the Suntouched Myr as a 2/2 and use the Wayfarer's Bauble to search out a Mountain. Nakajima played a Tel-Jilad Lifebreather, but Mitsuya would have no regeneration tricks happen against him, and he Bolted the Lifebreather away. He played a Neurok Stealthsuit and left two blue mana open for quick equipping. With more creatures on the table, Mitsuya felt it was time to press the attack, despite the fact that Nakajima did not equip his Sylvok Explorer with the Viridian Longbow when he had the opportunity. He attacked again, and this time Nakajima was able to get 3 counters on his Baton of Courage. Mitsuya licked his wounds as he fell prey to the same combat trick twice. 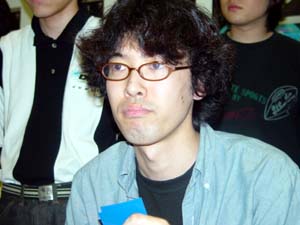 Mitsuya emptied his hand, playing a Trinket Mage, fetching a Seat of the Synod and a Quicksilver Behemoth. But this brought a smile to Nakajima's face as he played a Tanglewalker and a Blind Creeper. After crunching the numbers, Nakajima sent his unblockable army through Mitsuya's defenses. Mitsuya drew and had a single card in his hand. He launched an alpha strike in response, but that wasn't enough to put Nakajima away. Nakajima did the math, and sent his army again in the third alpha strike of the game. He had just enough to knock Mitsuya down to zero life. But Mitsuya played, of all unlikely tricks, a Scale of Chiss-Goria, shrinking the Blind Creeper and preventing the one point of damage that would have killed him. The following alpha strike was too much, and Nakajima extended the hand in respect. Spectators agreed that this had been one hard fought match.