Round 9: A Close Shave

Two men enter, one man leaves. But unlike Thunderdome, there will be no busted deals or facing of wheels. Instead, one of these two players will emerge as the sole remaining undefeated. On one side, 2006 Finnish National Champion Max Sjöblom. On the other, two-time PT Top 8 competitor Sebastian Thaler of Germany.

The match got off to a strange start. Thaler got out a fast Goblin Fireslinger and started whittling Sjöblom's life total, but had no follow-up for turns two and three. Meanwhile, Sjöblom had kept a two-lander with Merfolk Looter, but despite Looting away first Harbor Serpent then Armored Warhorse, he could find no third land. 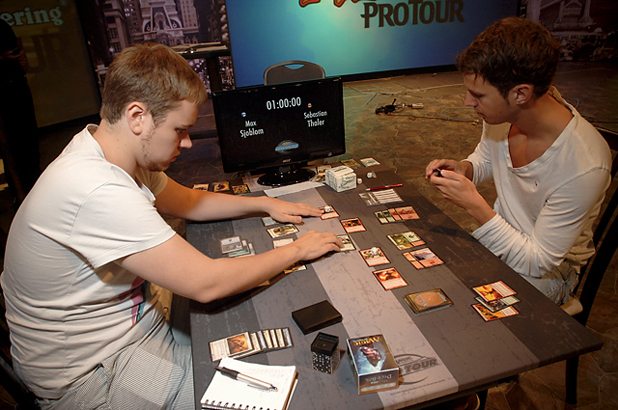 Max Sjöblom and Sebastian Thaler have not yet tasted defeat this weekend.

Four mana gave Thaler the opportunity to act. With the help of his Fireslinger he summoned a bloodthirsted Gorehorn Minotaurs. Sjöblom drew, Looted away Griffin Sentinel, and finally found himself a third land. He case Roc Egg and passed. Gorehorn Minotaurs rumbled in, and Sjoberg upgraded to a Roc. Thaler took out the Looter with Chandra's Outrage and passed.

Sjöblom untapped and played a fourth land. He hit for 3 in the air and tapped out for Assault Griffin. Thaler upped the pressure with a hasty Crimson Mage and swung in for 7. Sjöblom let both through, and Thaler showed him Hunter's Insight for five. Sjöblom was down to just 7 life and facing a full grip. He showed no concern, however. He swung in for 6 and completely reversed the game's momentum with Timely Reinforcements]the Timeliest of Reinforcements. Now he was at 13, with plenty of ground defense to back up his air force. He further complicated things for Thaler with Pride Guardian.

Thaler summoned Vastwood Gorger and hasted it up, attacking with it and the Minotaurs. Two Soldiers stepped up to save Sjöblom, who returned fire for 6 in the air and cast Serra Angel. Thaler untapped and started counting and recounting his mana. He pinged Sjöblom down to 10, then cast Blood Ogre and hasted it with Crimson Mage, leaving himself four mana. He spent two of it on Incinerate to get rid of Pride Guardian, then swung with the Mage, the Ogre, the Gorger, and the Minotaurs.

Sjöblom bent over the board and studied it, trying to decide what the two remaining mana represented. He considered chumping the Vastwood Gorger and blocking the Blood Ogre with Serra Angel, but reconsidered and put a priority on protecting his life total. The Angel moved in front of the Gorehorn Minotaurs. It was a good thing he did, because as it stood the Titanic Growth in Thaler's hand could only make it 9 damage, one short of the kill. He passed it back to Sjöblom, who swung with both his remaining fliers to take the game.

Thaler found his fast start for the second game, opening with Llanowar Elves, Crimson Mage, and then an Incinerate for Sjöblom's Merfolk Looter. He stalled on land for a turn, and Sjöblom resolved Griffin Sentinel for defense. Luckily for Thaler, a Forest was waiting on top of his deck, letting him bust out Cudgel Troll, which sauntered past the Sentinel and allowed a bloodthirsted Gorehorn Minotaurs. The bad news was that Sjöblom had the Flashfreeze. 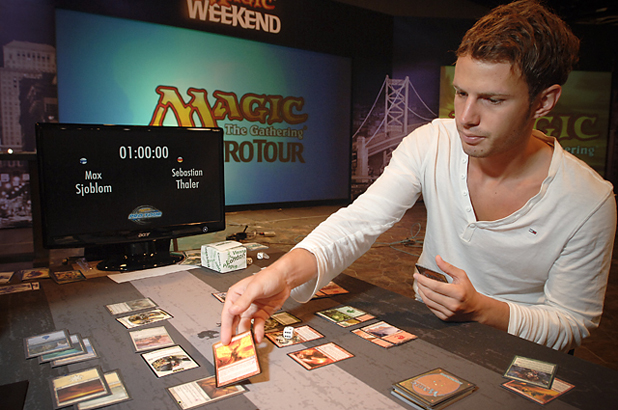 Sjöblom cast Divination and passed. At just 12 life, he needed an answer for Cudgel Troll. Thaler moved to shut the door with a nonlethal Overrun (having to tap his Llanowar Elves for the third green mana) that cost Sjöblom his Sentinel and left him at 3. He untapped and played out Armored Warhorse and Roc Egg, buying a little more time. The Egg blocked the Troll and became a full-grown Roc. Thaler played a second Llanowar Elves and passed.

Down came Serra Angel for Sjöblom. The Troll attacked again, and this time Armored Warhorse dove in front. Thaler tapped seven for a 6/6 Carnage Wurm. It looked like it would be enough. Sjöblom hit for 4 with his Angel, then cast another Divination and passed back with three mana open. When Thaler turned all his creatures sideways, Sjöblom packed up his cards.

Both players kept their opening hands, and they were off. Thaler was first on the board with Llanowar Elves, and after Sjöblom cast Armored Warhorse, Thaler revealed that he had kept a one-lander. He cast a second Elves and passed. Sjöblom played his third land and hit for 2. Thaler missed again, but cast a third Elves.

Still Sjöblom made no move. Thaler finally plucked a Mountain, but didn't play it yet, betraying nothing. He tapped his lone Forest and two Elves for a Sacred Wolf. Sjöblom obliged him with a Flashfreeze, then frowned when Thaler revealed the Mountain and summoned Crimson Mage. Sjöblom finally got on the board with Serra Angel.

Thaler balked twice before finally moving Crimson Mage to the Red Zone. Sjöblom put Armored Warhorse in front of it. Titanic Growth traded for the Warhorse, and after combat, Thaler sacrificed the titanic Mage to Fling, shooting down the Angel. Sjöblom replaced his Angel with a much less impressive Arbalest Elite. Thaler tried to clear it out of the way with Incinerate, but Stave Off made the save. Sjöblom finally got an Assault Griffin for offense, and his position looked strong as all Thaler had was another Crimson Mage.

Sjöblom hit for three in the air and cast Timely Reinforcements for three Soldiers. All Thaler could add to the board was an unaugmented Blood Ogre. Sjöblom hit for 3 again and passed with two cards in hand. Thaler played another Blood Ogre. Another hit from the Griffin left him at 7. Sjöblom looked the board over and decided he didn't want to take any chances. He stole one of the Ogres with Mind Control. 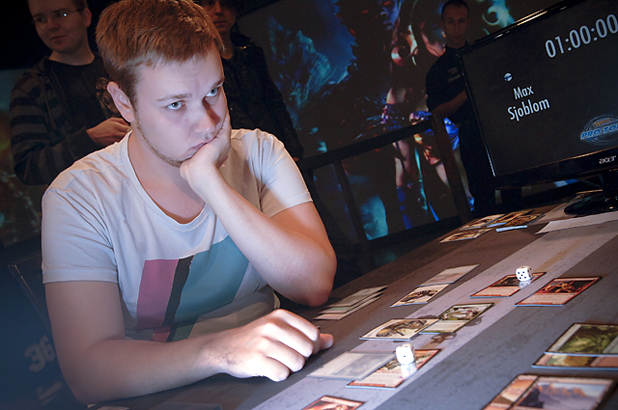 Thaler untapped, played a fourth land (his second forest) and tapped seven for Carnage Wurm. Suddenly the possibility of being Overrun looked very real to Sjöblom. Thaler had only one card in hand. Sjöblom agonized over his next move. Eventually he chose to drop Divine Favor on his Griffin, going up to 21 and cutting the clock to a single turn. He passed the turn back to Thaler and waited to hear the bad news.

Thaler drew, then attacked with just the Carnage Wurm. Sjöblom moved his monsters around, trying to decide what to do. Finally he put 3 power of creatures in front of it. Thaler drew three off Hunter's Insight, and Sjöblom finished off the Wurm with his Arbalest Elite. Thaler drew nothing to stop the flier, and conceded.