Round 9: Cole Swannack vs. Dan Clegg 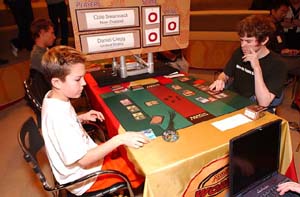 After his impressive 5-1 showing in yesterday's Standard portion, thirteen year old New Zealand National Champion Cole Swannack has started off 1-1 in his first draft pod of the day. His deck is impressive, with some great spells such as Elephant Guide and Violent Eruption. Unfortunately, his creature base leaves a little to be desired, as it is starving for two drops, which are essential in an aggressive deck. This wasn't his fault; he just didn't see any. Winning this match would put him up at 2-1 for the pod, and keep him in good contention for Top 8. In his way is Dan Clegg, one of the most consistent top finishers in America. This match is also a drastic clash of playstyle; Clegg is notorious for being one of the slowest players on the tour, while Swannack plays with the speed one would expect from a thirteen year old, minus the mistakes that can come with it.

Swannack mulliganed to start, and a Mesmeric Fiend revealed a hand of Liquid Fire, Sudden Strength, Nantuko Calmer, Barbarian Lunatic and two lands. Clegg decided to take away the Lunatic, and cast Wormfang Turtle on the following turn. Swannack then played his first spell of the game- a third turn Harvest Druid. The Turtle swung for two points of damage, and was joined by Putrid Imp. Swannack tried to stop Clegg's assault with Nantuko Calmer, but it was countered with Rites of Refusal. Nullmage Advocate died to a Ghastly Demise, and Swannack took another four points of damage. Not helping matters was that fact that Swannack was stuck at three lands, but his Harvest Druid was keeping him in the game. It allowed him to cast Acorn Harvest, but Clegg got through with his turtle and a flying 2/2 Putrid Imp. Repel sent Harvest Druid back to the top of Swannack's library, slowing him down significantly. Aven Fogbringer on the following turn was another tempo swing against an already mana starved Swannack, who conceded soon after. 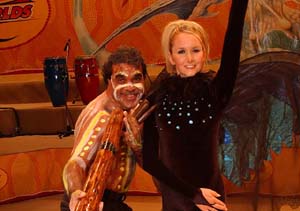 This game was the opposite of the last one, as Swannack had plenty of mana but not much to do with it. His second turn Harvest Druid attacked for a few turns, and Barbarian Lunatic hit the table on turn five. Clegg then summoned Soul Scourge, which died to Fiery Temper. Swannack built up his side a little more with Liberated Dwarf. Clegg used Wormfang Turtle to bring out Wormfang Drake, which died to Violent Eruption. Exoskeletal Armor made the Lunatic a 4/3, letting it get past the Turtle. Crypt Creeper gave Clegg a creature that could help the Turtle take down the Lunatic. Swannack untapped and thought for a bit, before sending the Lunatic into the Red Zone. Clegg blocked it with both of his creatures, and Swannack killed the Creeper with Sonic Seizure before damage. Clegg then used Repel before damage to save his Turtle and gain some card and tempo advantage. The Lunatic came back and traded with the Turtle a few turns later, and Swannack summoned Nullmage Advocate.

The Advocate was taken out by Slithery Stalker, and was followed by Aven Fogbringer. Swannack attacked with both of his creatures, and Liberated Dwarf traded with the Aven while the Druid got through for one. Clegg sacrificed a Seafloor Debris to play Grim Lavamancer, which went under Wormfang Drake. The Drake fell to the Druid, with a little help from Sudden Strength. Clegg then drew a timely mountain, and shot down the Druid, leaving Swannack with no creatures.

At this point a judge stopped the game, and after some talk with two other judges, brought up that Clegg had forgotten to mark down taking a point of damage. Clegg's response was that he had crossed out the eleven, but his pen didn't write the ten. A great deal of conferencing between judges occurred afterwards, and the ruling was that Clegg would receive a game loss for misrepresentation. 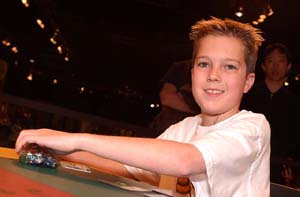 Clegg opened with Putrid Imp, while Swannack played Barbarian Bully a few turns later. It died to Ghastly Demise, and Swannack came back with Twigwalker. Clegg tapped out for Concentrate, and played Soul Scourge on the following turn. Swannack cast Elephant Ambush on end step, untapped, and cleared away Clegg's side with Violent Eruption. This let his team attack for five damage. Faceless Butcher took care of the elephant problem, and Swannack targeted Twigwalker with Elephant Guide. Unfortunately for Swannack, Clegg had Aether Burst in response to deal with that. Arcane Teachings made the Butcher huge, and Aven Fogbringer gave Clegg more of an advantage. Harvest Druid and Nantuko Calmer were added to Swannack's side, but seemed a bit incapable of dealing with Clegg's board. The Fogbringer and monster Butcher attacked, and Swannack did not block in fear of a trick. Browbeat let Swannack draw three cards, since five damage was a bit too close for comfort. He followed up by playing Dwarven Scorcher. Clegg started thinking about his next attack, and got a warning for slow play. Time was called soon after. Repel targeted the Scorcher, and it was sacrificed to target the Fogbringer in response. Clegg took two damage and attacked for the win, but Swannack had Fiery Temper. Facing down a lethal attack next turn, Clegg conceded.