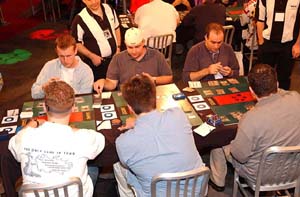 Stalking Tiger came into round nine with only one loss and sitting in second place in the overall standings.

The team that stands percentage points ahead of them? Bob Maher, Gary Wise, and Neil Reeves—Courtney's Boys. They are also the only team that has handed Matt Urban, Paul Jordan, and Josh Ravitz a loss, way back in the fifth round yesterday.

As the players settled in to play the round I went to the opposite end of the table I was at yesterday and prepared to follow the match of up and coming Josh Ravitz versus internet pundit and past team Pro Tour winner Gary Wise.

After a preliminary good luck handshake both players elected to keep their initial draws. Both players kept five land hands and neither seemed very comfortable about it. Josh made the game's first animal in the top half of turn three with a Gravegouger. Gary attempted a Longhorn Firebeast but Josh took his punishment like a man and went to 15.

Josh played his fourth Swamp and enchanted his 2/2 with Shade's Form. He moved his creature into the red zone and pumped it once to drop Gary to 17. Gary cast a Barbarian Lunatic.

Josh pumped his Gouger to a 6/6 as it sped past the Lunatic. Gary made reinforcement in the form of another Lunatic and a Basking Rootwalla. Both players played Draw-Go for the next couple of turns with neither of them missing a land drop. Finally, Gary cast a Phantom Tiger. His Rootwalla was killed by an Ember Shot EOT.

Josh played a Petravark taking a Mountain and sent the turn back. Gary played Exoskeletal Armor on his Phantom dude. Josh had no responses until Gary sacrificed his Lunatic kill the 'Vark. Josh could not respond to the sacrifice of the Lunatic but could not wait until after his Petravark died because it would be too big for his waste Away—which Josh used in response.

Josh had a free attack and took Gary down to 8 and added a Whispering Shade to his side of the table. Gary could only play another Armor on his remaining Lunatic and pass the turn.

Josh cast Anger and attacked with everyone. After his creatures were dome being pumped he left Gary on 2 life. Gary looked at the next card and saw nothing and they moved onto Game 2.

Matt had dropped Game 1 to Neil at this point. Paul and Bob were hunkering down for a long drawn out match.

Gary kept a two-lander this time and was able to play a Nantuko Tracer on turn two—although he did miss his third drop. Josh made a Barbarian Bully on his turn and passed it back to Gary.

Gary drew another land and attacked into the Bully. When Josh activated it, Gary killed it in response with Fiery Temper. Josh made a Springing Tiger and was done.

Gary made a Krosan Avenger and Josh had no land and no play in the bottom half of the turn. Gary swung his Avenger into the Tiger and they traded. Josh was till without land or play on his turn. 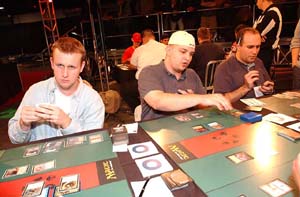 Gary attacked down to 12 and attempted a longhorn Firebeast which came into play. Josh finally drew a Swamp and was able to play a Whispering Shade with a Tainted Woods open in case of lava dart..

Gary cast an Iron shell Beetle and pumped his Tiger. Sonic Seizure dispatched the Shade with a Sonic Seizure. Josh made a Warthog but Gary had Temporary Insanity to steal it for the win.

Matt and Neil were going into a third game while Paul Jordan and Bob Maher was STILL playing in Game 1.

Josh played first and played five straight land before he summoned a Patchwork Gnomes. Gary meanwhile had tried to cast Firebeast but Josh would rather have been at 15. He did play a Barbarian Lunatic.

Josh had gone straight to seven mana and celebrated by casting Roar of the Wurm the hard way. Gary threw a Fiery temper at his head during the EOT and dropped Josh to 10.

Gary untapped and made a costly error. He tapped seven mana and cast Firecat Blitz for f our. He had another mana floating when he attacked with his guys and had to burn for one. Josh's life fell to 7 as he ate a couple of creatures in combat.

Josh flashed back the Roar and cracked with the first one bringing Gary to 13. Gary is holding temporary Insanity and he thinks he sees a way he can win the game. He taps three red into hi spool and sacrifices three mountains to make 3 tokens. When he attacked for three Gary burnt for one mana still floating in his pool. Josh was able to block 2 and Ghastly demise the other one.

Josh sent everything into the red zone and took Gary down to four life. He played a Shambling Swarm and said go. Gary drew and looked at the board for a while. He ran through every permutation and in the end he could only do six==one short of the magic number. With three creatures in graveyards, Gary could have Temporary Insanity'd the Swarm, enchanted it with Exoskeletal Armor and attacked for the win...

If only Josh was at 6. It turns out that the one Blitz token that Gary missed turned out to be the difference between winning and losing his match. He was distraught afterwards—with no real explanation as to why he made four tokens instead of five.

By now Bob was up a game on Paul Jordan and things were looking good for Maher in Game 2. 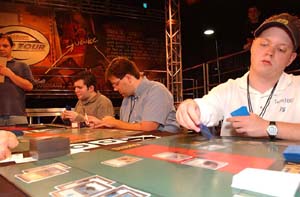 Matt and Neil were caught up in a nail biter of a third game. Back on his heels for most of the game—Matt was finally stabilizing and had a real chance of pulling this one—

--never mind. Neil had the Aether Burst for the win.

That left Stalking Tigers chances in the hands of Paul Jordan. Paul was just playing to play again and set up an Alpha strike that ended up falling one point short of the mark and Bob was able to swing back for the win.

No one was happier about it than Gary Wise.