Round 9: Damn, Damn, and Double Damn! 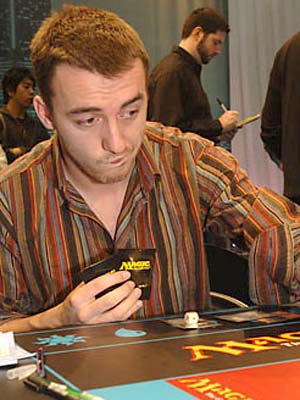 Olivier Ruel is an old hand…

livier Ruel sat down in Round 9 of Pro Tour—Yokohama for what is approximately the eleventy billionth feature match of his Magic career. For Will, it was the very first. He has only played a couple of PTQs, and after winning out with Scepter Chant, he was on his way to Japan. On Day 1, his Sliver deck picked up only a single loss, beating both White Weenie and Teferi Control with equal ease. For his matchup against Olivier, he would have to deal with a full four Damnation main, and three copies of Snapback that could potentially break up the Sliver synergy.

Will won the roll, and started with a full grip, while Oli had to mulligan to six. In short order a pair of Sidewinder Slivers were in play and attacking for the first damage of Day 2, though there was no turn-three play from Lowry, who passed with a small frown. While there were just a couple of 1/1 Slivers in play, Oli seemed loathe to use a removal spell, waiting until he was on 15 to use the copy of dead in his hand to kill one of the flankers opposite from him. The other one was hit by Disintegrate to leave a board that was briefly empty, until Sulfur Elemental flashed in for some quick attacks.

Olivier leaned back in his chair and flicked through his hand, pondering the board and looking at his hand intently. He elected to just play a Prismatic Lens and pass. Lowry's next attacks took him to 9. Will was slow to put creatures into play, but while they were coming down one at a time, they were forcing the Frenchman to get minimum value from any of his mass removal.

On the next swing from Will, Olivier took action. He played a Bogardan Hellkite to kill Sulfur Elemental, and burn Will for 3. Lowry responded with a Sedge Sliver. With five cards in hand, he got hit by a Haunting Hymn the following turn, forcing him to lose Disintegrate, Rift Bolt, Two-Headed Sliver and Bonesplitter Sliver. Another Two-Headed Sliver came down the following turn, and allowed Sedge Sliver to run in unimpeded. Oli was at 6, but had the Damnation to clear the board. At this point Oli had one card in hand, while Will had none at all. In spite of being ahead 12 life to 6, Will looked a little nervous. This seemed fair enough, as there was also an Urza's Factory on the other side of the board.

He played a Two-Headed Sliver and passed, seeing Olivier play an Assembly-Worker token at the end of turn. While Lowry didn't have a new Sliver for the following turn, Olivier's clockwork army was ticking along nicely. At the end of turn the following turn, Ruel had Mystical Teachings for a Tendrils of Corruption though he only had a single Swamp at this point. This was still enough to finish of Will's solitary Sliver though, and soon Olivier's tokens were attacking Lowry down to 8. At the end of turn, Mystical Teachings was flashed back, finding Cancel, in order to help seal things for Oli.

Oli's two tokens ran in, and while one of them died to a Sudden Shock, the other took Lowry to 6 – the first time that the young American had been down on life in the match. Cautery Sliver was allowed by Olivier, who played Void on his turn. Will responded to this by playing a Sudden Shock to drop Olivier to 5, and sacrificed his Sliver to put Ruel at 4. Void resolved, and Olivier chose nineteen—doing about as well with it as he would have with any other number. With Lowry bereft of non-land cards, either in hand or play, it did not take long for Ruel to finish up 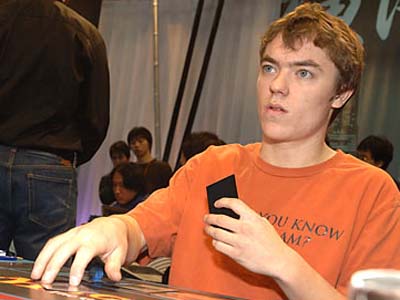 …while Will Lowry is a fresh face.

Will began by suspending Rift Bolt, and went to the dome with it before playing Cautery Sliver, swiftly dealing the first 5 points, but losing it and a Sidewinder Sliver to a turn three Damnation of a Prismatic Lens from Ruel. Void came next turn, which went in for three and saw Calciderm, Disintegrate and Bonesplitter Sliver. Lowry didn't have the land he needed to play his creatures though, and for the next couple of turns lived off the top of his deck, with Sedge Sliver and Cautery Sliver. These still did an ample job of attacking, taking Olivier to 10 before he played another Damnation.

Finally, Lowry played his fourth land and a Calciderm. The beast was blocked by a flashed in Bogardan Hellkite, who did 5 to Will on the way in, and then traded. Bonesplitter Sliver was up next. Olivier chewed thoughtfully on his pen. He played a second Void, this time naming four, and seeing Disintegrate and Sudden Shock in Lowry's hand.

Will had no play beyond a land for his turn, and Oli trumped him with a Sulfur Elemental. Still Lowry built his land base. He was then attacked down to 9 by Sulfur Elemental and then hit by a lethal Disintegrate before he could build up the mana to fire off one of his own.