Round 9: Darwin Kastle vs. David Williams 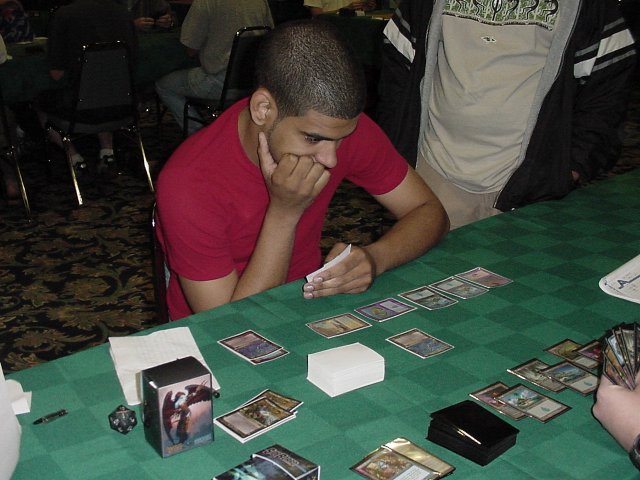 Both Darwin Kastle and David Williams were sitting on 18 points when they began their round nine feature match, but they took quite different paths to get there. Kastle has been testing the format extensively with his Your Move Games teammates, and after much debate settled on a blue-black-red control deck. Williams showed up without a deck he really liked, just because he loves to game. Saturday morning he checked out the Grand Prix Kobe results on the Sideboard and saw that two of the four players at 9-0 were running aggressive blue-white-red decks so he switched over to team Lightning Angel. Kastle barely squeaked into day 2 because he picked up 3 draws in the four rounds of Magic he played. He still hasn't lost, but three draws gives you the same point total as two losses, which is what Williams has.

Williams began game 1 with just 5 cards thanks to a pair of mulligans. He could still win with an aggressive start, potentially swarming Kastle before Kastle could gain control. He did have a turn 2 Galina's Knight, but he couldn't follow it up with any more pressure. His hand started clogging up with useless Flametongue Kavus and a Repulse. Kastle Lobotomied away his only good card - a Prophetic Bolt - and I think they were just going through the motions for the rest of game 1. Kastle easily won the race to 12 mana and a pair of kicked Rages ended the game.

Williams had another questionable draw in game 2. He decided to keep it, despite the fact that his only two lands were Plains. He immediately top-decked the island he needed to play Galina's Knight, but his two Goblin Legionnaires just sat in his hand until he finally drew Shivan Reef on turn 5. Then a pair of Undermines from Kastle evened out the life race at 12-12. Williams' Lightning Angel ran into Undermine #3 and Kastle was actually briefly ahead of the pace set by that turn 2 Galina's Knight. Williams promptly drew two more Lightning Angels. Kastle Voided away the first one, but that revealed two copies of Aura Blast and a Prophetic Bolt in Williams' hand. Kastle had been trying to set himself up for Yawgmoth's Agenda (he had two in hand), but those Aura Blasts ruined his plan. He Iced the third Angel once to buy a turn, looked at his hand for a minute, and scooped. 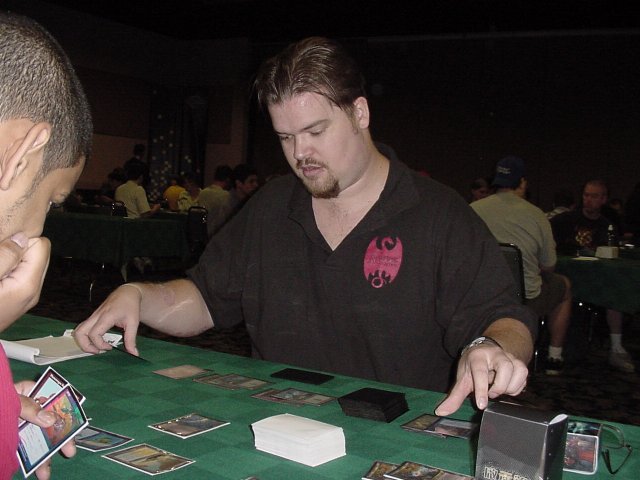 Williams flashed me his hand before game 3, revealing just a single land, and wondered aloud "what is up today?" as he started shuffling again. His 6-card hand had no creatures in it, but it did have a mix of land and spells, so he kept. The top of Williams' deck didn't have any creatures either so not much happened until turn 9. That's when Kastle played a 4/5 Emblazoned Golem with just three mana left untapped. Williams threw two Rages at it and Kastle tapped out to play the Boomerang mode of Crosis's Charm, returning his golem to his hand. That gave Williams a window of opportunity and he used it to play Lightning Angel. Kastle, however, wouldn't have tapped out if he didn't have an answer. In this case the answer was Tsabo's Decree and that got the Angel in Williams' hand as well. Since Williams' deck has no permission, it just couldn't compete in a long game. Kastle's golem came back down again and Williams couldn't kill it or get any creatures of his own through Kastle's Excludes.