Round 9: Dave "The King of Beatdown" Price vs. Alex Borteh 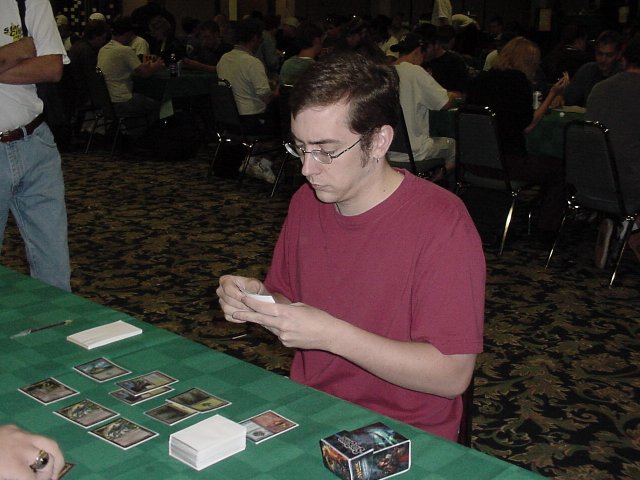 Going into the 9th round the World's finalist Alex Borteh and Dave "on the qualifying trail" Price are the only undefeated competitors left. Price is currently unqualified for PT New Orleans, but a Top 8 or better will put him right back on the Tour, so he has a lot invested in remaining undefeated through the swiss today. Borteh has simply been on a tear, his second place finish at Worlds seems to have invigorated him, and with a lot of momentum and fan support he is looking to make Denver another notch in his belt. Each time they have met in the past, Price has won, so Borteh is clearly looking to get some revenge to boot.

Price is running his U/G/r tempo deck. Using a mix of Gaea's Skyfolk, Blurred Mongoose (the Goose), and Kavu Titans to create massive early pressure, and combined with a mix of burn (Urza's Rage, Prophetic Bolt),counter magic and bounce he can quickly leave an opponent struggling to find answers to his little men. Borteh is running U/R/B control, using a mixture of Nightscape Familiars and early burn to slow rush decks like Price's and then take control with massive card advantage elements such as Fact or Fiction, Prophetic Bolts and Void. The uncounterable, untargetable goose is often the determining factor in this match-up, which is the reason why Borteh has the Familiars main deck, and the ability to bring in Ravenous Rats from the board as well.

Borteh kicks things off, wishing Price luck, which generates a mulligan by Price. He calmly lays lands while Price explodes out of the blocks with a pair of Skyfolk and a Mystic Snake on Borteh's attempted Malice. Borteh tries to fight back gamely with a pair of Fact or Fictions digging for answers, but he comes up short, revealing far too many lands and no where near enough business spells. While he does manage to eventually sweep Price's board (with a mix of Void and Rage), he's been dropped too low in life (3). A top decked goose by Price hits the table and it's all over with two swings. 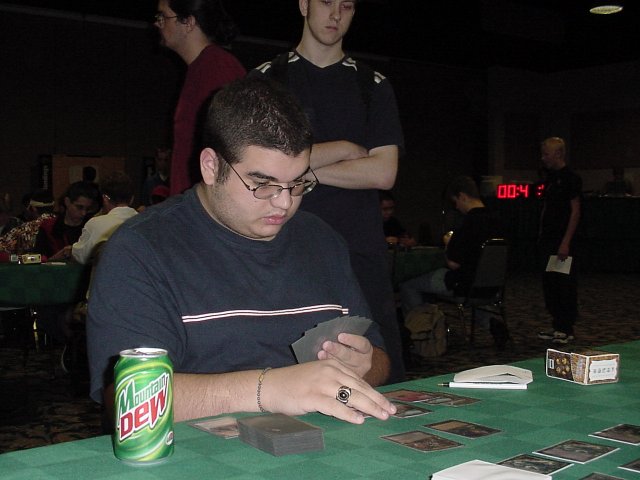 With game two about to start, Borteh digs deep into his sideboard and wishes Price luck again. Superstition seems to run high among the pros, as Price again just says thanks. This time Borteh is forced to mulligan, so what this superstition is supposed to do is beyond me. A turn 2 Nightscape Familiar from Borteh gets fired up, and on the next turn, Borteh drops a Ravenous Rat. This gets the curious eyebrow from Price, but he drops a Forest from his hand. Over the next few turns a goose shows up for Price, and another Familiar for Borteh, which results in several rounds of stare down, either between the goose and familiar, or Price and Borteh, take your pick. Eventually a massive counter war erupts over a Fact or Fiction by Borteh, but when the dust settles, Price has a pair of Mystic Snakes on the board to give the goose moral support, while Borteh is nursing a pretty lonely hand. However, Borteh rips like the pro he is, clearing Price's board over the next couple of turns, but leaving him with nothing but a Rat and Familiar to apply the beats. Price comes back big time, showing that he can rip just as well, slamming down a kicked up, fat butted, trampling Kavu Titan. Borteh rips again (at this point both players are simply playing off the top of their decks) with a Malice for the big Kavu, and continues applying the beats. Combined with the pain from Price's lands this has dropped Price to just 4 puny points of life. A Prophetic Bolt off the top for Borteh takes game two.

As these two undefeated players shuffle up for game three, there is less than 8 minutes on the clock. Both want to remain the last undefeated and virtually assure themselves a top 8 berth. Price is forced to double mulligan, and by the time both are content with their hands, 4 minutes are left. This time has to favor Price as Borteh's deck just doesn't look fast enough to kill in the time left. 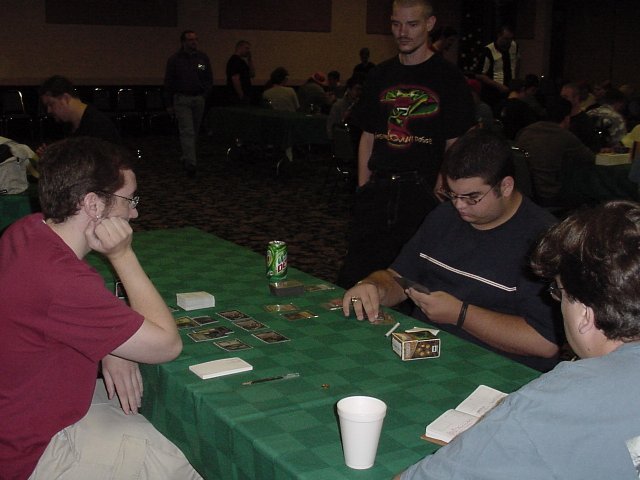 Price proves his hand is worthwhile, coming out racing with a pair of Blurred Mongooses (Mongeese?) and a certain flying elf that should know better than to challenge a burn player. It gets dutifully Terminated, but the gaggle of geese keep applying the beats. Time is called with Alex at 8 life, Price gets one last swing with the Geese, dropping him to 4, but a Void sweeps the board on the 2nd extra turn. On the final turn Dave rips a Prophetic Bolt from the top (which would kill Borteh), but Borteh has the counter and the game ends in a draw.

Neither man seemed happy with the draw, but they continue on, hoping to meet again in the finals where they can settle it.