Round 9: Dave Williams vs. Helmut Summersberger 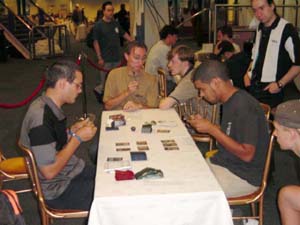 Dave had a Black-blue-white 'Go-Mar' deck, while Helmut came along with black, blue and red cards. Both had a nice day yesterday, going 8-0. This match was to decide who continued that winning streak. Before the match even got underway, the judge decided that Summersberger's sleeves were too worn, and charged round the room to find him a set which were fit for play. While Helmut and the judge resleeved his deck, Dave wandered over to watch the other feature match. It featured the other players on 8-0, and hence potential future opponents (not least of the advantages of this was that if Dave had a match against either of them in the future, he would have a better idea of what to name with his Meddling Mages).

After his deck had been sleeved up, Helmut won the dice roll and chose to play first. The game started slowly, with a pair of Nightscape Familiars being summoned by Helmut, while Dave just laid some land which came into play tapped (Coastal Tower and Salt Marsh). On his third turn, Dave Vindicated Helmut's only Island, and Helmut had no more land. Dave continued his primitive land destruction with a Recoil on the next turn on Helmut's Urborg Volcano, causing the Austrian to throw away an Exclude. Dave then Vindicated Helmut's Urborg Volcano, leaving him with just two Swamps. As Dave had seven land in play, the game was virtually over, despite the fact that the Familiars had reduced Dave to eleven life. After a Fact or Fiction got Dave a Salt Marsh, a Swamp, a Spectral Lynx and a Gerrard's Verdict (the other card was Rout, which would end Helmut's slim chances by killing off his Familiars. Dave spent the next few turns emptying Helmut's hand with kicked Probes and a Gerrard's Verdict. He completed Helmut's misery by Vindicating one Island that Helmut drew, and Recoiling another when Helmut had no cards in his hand. The Familiars were Routed away, and, although on 20 life, Helmut decided to concede.

Both players found Dave's powerful landkill draw amusing (although Dave was probably the more amused of the two). Dave brought in 4 Gainsay and 2 Lobotomy, removing 3 Rout and 3 Spectral Lynx, while Helmut removed Excludes and Fire/Ices to put in some Gainsays and some Dodecapods, very powerful against the Probes, Verdicts and Recoils that filled Dave's deck. As Dave's main way of winning (except for killing all of Helmut's land) was by making Helmut discard all of his cards, the Dodecapods were bound to see play at some stage.

The early stages of game two were very exciting for members of the Watching Paint Dry club, but for the rest of the spectators, including several players who had finished their own matches, the succession of coming-into-play tapped lands did not make for huge amounts of excitement. Helmut looked in trouble, though, as even without any help from Williams he found himself short on land, having to discard instead of playing a land on turn four or five. With seven land to his opponent's three, Williams cast Probe with kicker, with a Gainsay ready for any attempt that Helmut might make to counter it.

The Austrian, however, was more than happy to let Probe resolve, and dropped a Dodecapod into play. While Dave seemed unperturbed, he didn't have any way of dealing with it in his hand. As the 'Pod continued its attack, Dave emptied Helmut's hand with a Gerrard's Verdict and attempted another Probe, which Helmut Gainsayed. However, his only answer to the 'Pod was a Recoil, which was pretty weak although it did buy him a turn. With his Routs and most of his Lynxes looking on from his sideboard, the American suffered a horrible death at the hands of the 5/5.

Dave seemed shaken by this, and for the decider removed his Verdicts and Recoils, and put his Routs and Lynxes, along with a couple of Meddling Mages, back in.

For the decider, Helmut managed to keep on laying land past turn three for the first time. In fact, he laid eleven land in a row, which was good news for him, as, together with his Familiar, it allowed him to cast Urza's Rage with kicker. Dave's rather weak draw meant that his only way of responding to this was to gain 5 life with a Dromar's Charm. Dave was on eleven life after the Rage, and had two Lynxes staring down the two Familiars which were helping Helmut with his spells. Dave continued to draw cards like Vindicate which are not very powerful when the opponent has twelve lands, and as a last desperate throw of the dice, cast Yawgmoth's Agenda as the game entered extra time. A hard-cast Dodecapod entered play from Summersberger, he attacked Williams to bring him below ten life, and then Urza's Raged him again, with a Gainsay ready for Dave's attempt to gain 5 life in response.