Round 9: Derek Bruneau vs. Eugene Harvey 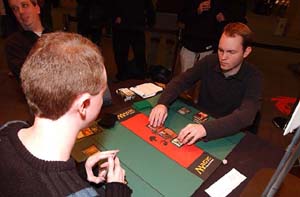 Going in to Round 9, only two players were 8-0: US Champion Eugene Harvey, and first-time PT'er Derek Bruneau. Harvey needs no introduction. Bruneua, 30, lives in Boston but rarely gets a chance to play with any of the city's other PT regulars. Instead he does a ton of drafting on Magic Online, and the skills he's honed in the digital world have translated into instant success professionally.

Derek drafted the "greedy" color combination of red/black, hoarding all the removal. His decision to do so created a ripple effect at the table that forced Eugene into the most maligned of all color combinations, white-green. Eugene is splashing for a Smother and a Silent Specter, but he will certainly have his work cut out for him against the rookie.

Bruneau mullinganed twice to start the match but added that he couldn't complain about his luck so far in this tournament.

Bruneau's five-card hand gave him three lands, but nothing to play on the first few turns. Harvey, ever lucky, played forest-swamp-plains on the first three turns and dropped a Wirewood Savage. Bruneau went to the air with a pair of Screeching Buzzards, while Harvey put out a Birchlore Rangers and a facedown creature. 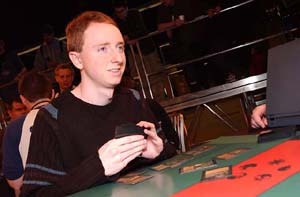 The key moment in the game came when Harvey sent the face-down 2/2 in, and then used the Rangers' ability to morph it into its true form: Silent Specter. A savaging ensued, especially when Tribal Unity allowed the Specter to survive being double blocked by two Buzzards.

Bruneau regrouped for Game 2 and came out with the killer opening of Goblin Sledder, Sparksmith, and Spitfire Handler. Eugene, playing mostly white/green, could do literally nothing about it. He put out a Dive Bomber to see if Bruneau was willing to actually use the Smith. To no one's surprise, the Bostonian did so, and Eugene scooped up his cards.

Harvey breathed a sigh of relief when it was evident Bruneau had no turn-2 play. With no Sparksmith in sight, he played out a Wirewood Savage. Bruneau Swatted it, but Eugene had a replacement one, plus Improvised Armor to suit it up. 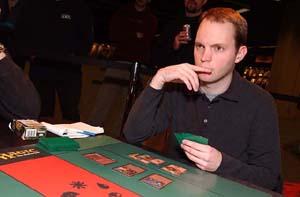 Bruneau deployed his standard air force of two Screeching Buzzards (he had 3 in his deck), and the race was on. But Harvey had his own little racer, Mobilization with six land in play.

The Buzzards kept swinging in the air, and Bruneau started playing creatures—including Sparksmith—for the sole reason of chump-blocking the 4/7 Wirewood Savage. Eugene kept making Soldier tokens, and eventually he won the game with a Tribal Unity, turning all the Soldiers into 4/4's.

After the match, Bruneau lamented mulliganing his second hand in game 1. He said it contained a swamp, a Barren Moor, Rorix, and a Sparksmith. Had he drawn a Mountain early, the Sparksmith would have given Eugene trouble. As it was, the five-card hand was too much of a handicap for his deck to overcome.