"Two players sitting next to each other, cooperating or something...We set the draft up pretty well for us," Anton Jonsson said as he smiled across the table at his drafting neighbor, the Slovak Republic's Ivan Floch.

Jonsson is a member of the trio of recently inducted Hall of Famers, known for his incredible Limited skill and his wonderful videos breaking down the general approach, as well as finer points, of Limited formats.

Floch is no slouch, either. In addition to representing the Slovak Republic in the Team portion of Worlds last year, Floch has had a number of consistent finishes, including a Top 64 finish at Pro Tour Paris and Top 16 at Pro Tour Nagoya earlier this year. 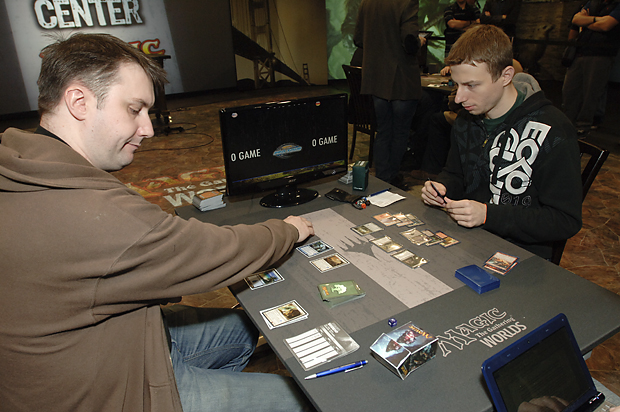 Ivan Floch's got some good finishes this year, but his opponent this round is decent Hall of Fame inductee Anton Jonsson!

Jonsson was the first on the table with a Silverchase Fox. It attacked into an empty board before he added a Deranged Assistant and a Doomed Traveler to his team. It turned out that the Assistant was the doomed one, as it didn't make it through the end step before Floch killed it with Geistflame. He then dropped a Markov Patrician onto his side before passing the turn.

Jonsson used a Silent Departure to return the Patrician to Floch's hand, clearing the way for his team to attack. He added an Avacynian Priest to his team, ready to take on the Vampire should it return. Instead of replaying Markov Patrician, Floch made an Abattoir Ghoul. This was enough to keep Jonsson from attacking on the following turn, and being stuck on three lands didn't help matters. This gave Floch the chance to play a Ghoulraiser, giving him the advantage on the table.

Jonsson finally found his fourth land, but it was a three-drop he played, a Laboratory Maniac. If nothing else, the 2/2 was an attacker that could keep things from getting too out of hand. Floch had an Into the Maw of Hell to deal with the Avacynian Priest, preventing Jonsson from being able to control the combat step at any point. It also ate an Island, dropping Jonsson back to three lands. After attacking with his Abattoir Ghoul, Floch passed the turn.

Jonsson decided to keep whittling the life totals away, even though he was on the losing end of the race. His team crashed into the lone Ghoulraiser on Floch's side. The Doomed Traveler finally lived up to his name, dying and leaving his Spirit behind. After combat, Jonsson made yet another flier, this time a Voiceless Spirit. The Voiceless Spirit didn't last long before a Geistcatcher's Rig came down for Floch. The Rig busted that Voiceless Spirit, returning the advantage firmly to Floch. The Abattoir Ghoul maintained his attacks, cleaving further into Jonsson's life total. 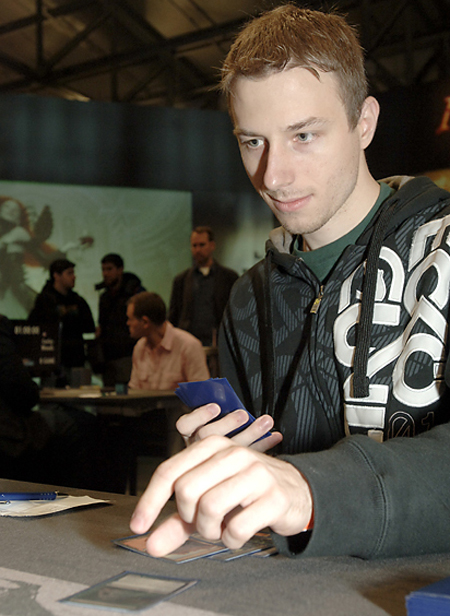 Geistcatcher's Rig catches one of Jonsson's ghosts, swinging the first game into the favor of Floch.

Jonsson kept playing dangerous fliers. His Battleground Geist didn't have as many Spirits to enhance as it once did, but the remainder of the Doomed Traveler was still around for some company. With a bit of an edge still thanks to the size of his Rig, Floch continued attacking. The Rig and Abattoir Ghoul attacked, dropping Jonsson to 8. After combat, Floch increased his army with a Screeching Bat, making sure to leave Geistflame mana available. When Jonsson swung in with his two fliers on the following turn, the Screeching Bat took one for the team, dealing the initial two points of damage to the Battleground Geist, allowing Geistflame to finish it off. The attack dropped Floch to 8, but he looked much better off without the 3/3 flier on Jonsson's side. Jonsson made an Abbey Griffin to replace it, but things weren't looking so hot for the Hall of Famer.

At this point, Floch began smashing back with a vengeance. His entire team attacked, forcing the Maniac to jump in front of the marauding Rig, dropping Jonsson to 8. After combat, the Markov Patrician finally deemed it worthy to reappear. Jonsson tried to hold on for one more turn, but he just couldn't put together enough creatures to stave off Floch's team, and he ended up succumbing to the next attack, his team devastated from sacrificial blocks.

In the second game, Jonsson was again the first on the board, this time with Silverchase Fox and Voiceless Spirit on consecutive turns. Floch had nothing for the first three turns, and Jonsson kept building steam. A third creature, Abbey Griffin, joined the fray. Floch failed to play a fourth land, or even a second Swamp, and discarded a Ghoulraiser with an air of disappointment. When he failed to draw anything castable again, he conceded to Jonsson's Sturmgeist.

"Maybe I should have mulliganed that hand..."

"What did you have?" Jonsson asked him.

"A couple of Mountains, a Swamp, the Ghoulraiser, some four drops," Floch revealed.

"I don't know. If the rest of your deck is aggressive, I would definitely keep that, but it depends on your deck. I hate to mulligan," Jonsson said with a laugh. Floch laughed and nodded his agreement.

Despite being on the draw, Jonsson was once again first on the board with an Avacynian Priest. Floch did get a Screeching Bat down immediately thereafter, followed by an Abattoir Ghoul, but he was facing some trouble. Jonsson had followed his Priest with a Deranged Assistant, which milled a Laboratory Maniac on the following turn, allowing Jonsson to play a Makeshift Mauler. With the Mauler in play, Jonsson controlled the board. Floch attacked with his Bat and passed the turn with five mana up. 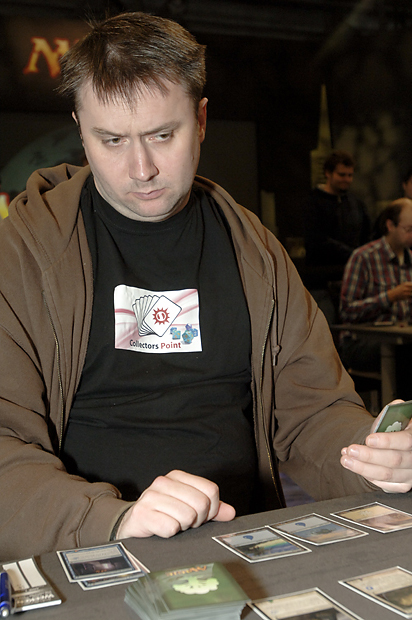 Jonsson gives some zombies an uncharacteristic Feeling of Dread, locking up the third game and the match!

Jonsson dealt with the untapped Abattoir Ghoul with a Fiend Hunter, clearing the way for a large attack. Floch slowed the bleeding some with a Tribute to Hunger, taking out the Deranged Assistant. Jonsson replaced it with a Silverchase Fox and passed the turn. Floch tried to make up some ground with a Moan of the Unhallowed, but the 4/5 Mauler on Jonsson's side was still a large problem, emphasis on large. It crashed over, taking a massive chunk out of Floch's life. Life totals swung to 13-18 in Jonsson's favor.

Floch's Bat once again walked into the Priest, leaving his two Zombies behind on defense. In an un-zombie-like scenario, Jonsson caused the Zombies a Feeling of Dread, leaving Floch defenseless. The German player used a Victim of Night to kill the Fiend Hunter, returning him his Abattoir Ghoul, but it was unable to block thanks to the Avacynian Priest. Floch took 6, dropping to 7. Needing to form a strong defense, Floch flashed his Moan of the Unhallowed back, doubling his Zombie count. His Bat flapped in for another attack, and he passed the turn.

At this point, Jonsson had the advantage in life, but the sudden surge in numbers on Floch's side proved to be a hindrance to attacking. He stayed home. Floch added a second Abattoir Ghoul to his team and sent his Bat to make sure that Jonsson's Priest kept busy. Things had reached a tense stalemate.

As tends to happen to stalemates, Jonsson's next draw broke it. More like crushed it. With a sigh of relief, he tapped his lands to cast a Feeling of Dread, tapping two more, then he flashed it back, tapping down all of Floch's team. With everyone watching helplessly over their shoulders, Jonsson's team stormed over Floch's sideways Zombie army to deliver the deathblow.

"I did not think I was going to win that," Jonsson admitted as he scooped up his cards, clearly breathing a heavy sigh of relief.