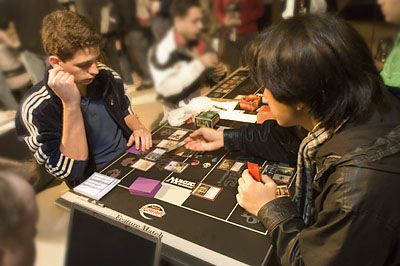 Paulo Vitor Damo da Rosa and Tsuyoshi Fujita were both undefeated coming into Round 9.

happens at different points in different tournaments, but here at World Championships 2006, it happened in Round 9. After a day and a half of play, only these two players remained with undefeated records. Both had looks of intense concentration as they shuffled their decks and prepared for battle to see who would continue on as the sole undefeated player and tournament leader.

For this one, Fujita had to settle for going second as well as taking a mulligan to start things off. Paulo's blue-white beatdown deck led off with a suspended Ephemeron, which Fujita's black-red removal-heavy control deck answered with Candles of Leng. Right from turn two, the roles were clear.

up, passing the turn, but Fujita passed the turn back on turn three as well. From here Paulo began pulling away, playing Watcher Sliver followed by Opal Guardian plus an Errant Doomsayers. Fujita began drawing off his Candles, getting a Swamp, then used that fifth mana on his own turn to cast a Gorgon Recluse. At this point the Ephemeron joined the field, swinging in with the Opal Guardian to drop the Japanese player to 11. Fujita had Premature Burial for the 4/4 flier but was falling dangerously behind on the board as his life total continued to drop. The Opal Guardian came in again, dropping Fujita to 11, and was joined by a morph. Fortunately for Fujita his Candles offered up a Dark Withering at the end of the Brazilian player's turn, which he then used to off the flier. 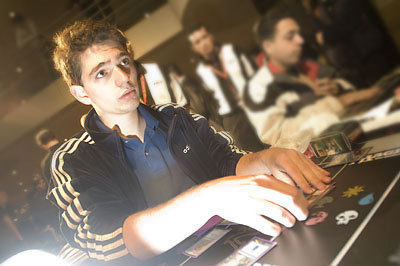 Next was an alpha strike from Paulo, sending in the entire team. The morph traded with the Gorgon after it flipped into a Slipstream Eel, leaving a Watcher Sliver and Errant Doomsayer on the board and Fujita at 5 life. On his own turn Fujita made what seemed like a strange play, pointing an Orcish Cannonade at the tapper. Dropping himself to 2, he peeked at his next card then conceded since the Watcher Sliver would take him out. However, at 5 life and facing only 3 damage on the table, it seemed like he could have just passed the turn, seen what his opponent did, then drawn off his Candles. With that plan, assuming nothing happened that turn to finish him off, he'd get another draw phase, the Candle draw, and possibly a second Candle draw to try and find one of his multiple Tendrils to get back into the game. (Once the match was over I asked him about the play and if the other plan was better, and he quickly agreed that taking the chance to draw 2 or 3 more cards was the better choice and that he'd simply misplayed it.) 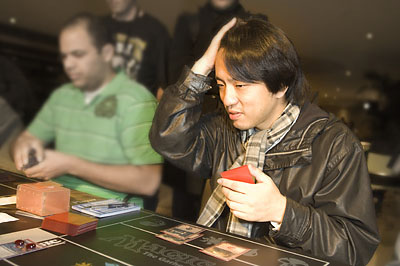 Now that he was on the play after a disappointing opener, this one actually managed to go worse for Fujita. Keeping his opening hand, he ended up stuck on two Mountains and then three Mountains for many turns, with only a suspended Halberdier to show for it. Meanwhile Paulo hummed nicely up the mana curve, playing Amrou Scout and Tivadar of Thorn, searching up a Knight of the Holy Nimbus, and then dropping out a Stormcloud Djinn. Fujita did his best, sitting on a grip of black removal that included a Sudden Death and a pair of Tendrils, thinking hard on which cards to discard to give himself the best chance at a comeback should the Swamps start arriving, but a turn later Thunder Totem and a Looter il-Vec joined Paulo's army, and Fujita was just too far behind to pull it out.

A tough loss for Fujita, but 8-1 is still quite a strong start at Worlds. For breakout Brazilian player Paulo, now 9 and 0, it was his first chance of the event to stand alone at the top of the standings, turning his sights toward extending his new lead.