edt doesn't make that many feature matches these days, but he is among the most famous Magic writers of all time, and still slings the spells from time to time, particularly in Constructed formats. Antonino de Rosa is a Florida native and longtime pro who has had a very successful year. In his own words, "I'm playing for thousands of dollars today due to the end-of-year payout. Now I just wish I was a little less hung over." 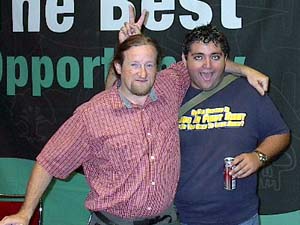 This early morning feature is an Affinity mirror match with very different sideboard plans. edt is playing the Mantle Affinity deck with Pentad Prisms and Furnace Dragon in the sideboard, while de Rosa is running a modified version of Karsten Affinity with Electrostatic Bolt and Shatters in his sideboard.

The first game started well for de Rosa, as he had an early Frogmite and Cranial Plating after a mulligan, while Taylor was stuck with only a Disciple of the Vault. The game came down to a crucial turn where Taylor had to block an Atog and a Frogmite with Cranial Plating, trading is own Frogmite and Disciple in order not to lose, while just De Rosa cast another Atog, saying "His brother is here for revenge." edt found an Arcbound Worker to block with on the next turn, but dropped to three in the process and died on the subsequent attack.

"Alright, let's see if I learned how to sideboard yet," pondered de Rosa

"This is my first mirror. I have no clue how good my sideboard is for this matchup," explained Taylor.

"I'll keep it," said Taylor, who then started shaking his head. "What are you thinking about," asked de Rosa, "That you shouldn't have kept it? Yeah. I ask that because I am thinking the same thing."

edt began with a second turn Night's Whisper to go along with his first turn Disciple. "Is Night's Whisper even good, edt? All you pros, you love these cards that say 'draw cards,' even when they aren't good against any deck. Every time I cast that card, I felt like I was giving my opponent a Time Walk."

De Rosa again got off to a solid start with an early Arcbound Worker plus a Frogmite, and then cast a turn 3 Somber Hoverguard plus Cranial Plating, eliciting a "yikes" from edt. The dinosaur paused for a very long time on his next turn, studying his hand. De Rosa eventually asked, "Alright, do you want to play your Furnace Dragon or not?"

The Hoverguard plus an Electrostatic Bolt traded with the Dragon, garnering more frowns from Taylor, as the match again stalled. Back-to-Back-to-Back Bolts from de Rosa forced him to admit "Wow, I'm really good at this" as he plinked away at Taylor with his Nexus and a Disicple. A fresh Cranial Plating on a Blinkmoth Nexus finished things.

Eric: "He had Blinkmoth Nexus, meaning the Furnace Dragon didn't do nearly as much as it needed to."

De Rosa: "That Furnace Dragon plan is really bad. It's only good if you haven't taken that much damage because five damage a turn often isn't enough. Plus the decks that run Atog and Somber Hoverguard are able to work around that and still keep gas in their hands. Cards like Bolt are much better because they kill Disciple in the mirror."