Round 9: Eugene Harvey vs. Brian Hegstad 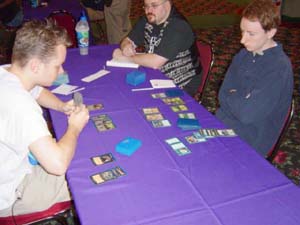 "I like your deck," said Brian Hegstad appreciatively. "We tried a couple of versions of that deck, but none of them worked."

Eugene's deck was indeed working - and it was the talk of the town. Many had tried to break Holistic Wisdom and Mirari's Wake before him, but it wasn't until Odyssey Block that a competitive Wisdom deck was born... A three-color hodgepodge confection of formerly-janky cards like Compulsions, Far Wanderings, and Crush of Wurms mixed in with tournament staples like Quiet Speculations, Aether Bursts, Moment's Peaces and Deep Analysis, the idea is to use Wake to ramp up to Crush of Wurms, find the relevant cards with Compulsion, then take a couple of Time Stretches to smash with a triplet of Wurm tokens.

Most people concede after the first Time Stretch is cast even if the Crush of Wurms is nowhere to be seen, assuming some sort of wacky combo; there was some speculation that Eugene, who picked the deck up the night before because it looked "fun," didn't really know how the deck won - he just cast Time Stretch and hoped to God that everyone conceded, because if they didn't he'd just sit there with a mildly confused look on his face. If he didn't know how to win with the deck when he started, he does now.

Hegstad is playing, surprise surprise, monoblack. He hadn't played the matchup, but believed that it was an uphill battle in Game 1, but it got better after sideboarding when he could bring in the usual array of black disruption.

The early morning opened in silence as the two shuffled and presented their decks. The only noise was a barely-heard "Luck" and a "You too," as they were off to the races. The game started in glum silence as Hegstad started off with a swamp, while Harvey laid a Krosan Verge. Hegstad laid his second swamp; Harvey debated in the traditional Eubroken style, before Quietly Speculating for two Deep Analyses and a Flash of Insight.

"That's cool," Hegstad muttered appreciatively, then Pacted to get another swamp.

The match was an eerie mime display, as the two of them laid spells silently and communicated end of turns via hand signals. If you've ever seen Hush, the wordless episode of Buffy the Vampire Slayer, you probably have a good idea of how it went.

Harvey used the Verge at the end of his fourth turn to get three colors; he had a hand of mostly land, but he had the two critical spells as well: Holistic Wisdom and Mirari's Wake, the turnpoint card of the deck. He also had a Living Wish. On his turn, he flashed back the Analysis to top him off to eight cards, then laid Compulsion, tapping him out.

Brian, seeing his opportunity, spent several minutes debating what to do. It was now turn 5, and fifteen minutes had passed. Finally, he decided to take advantage of the unexpected opportunity by Mind Sludging Eugene for five. Unfortunately, Eugene had wisely kept a full hand for just such an opportunity, and dropped all but the critical Wake and Holistic Wisdom after several long moments of consideration, casting the Wake the next turn. 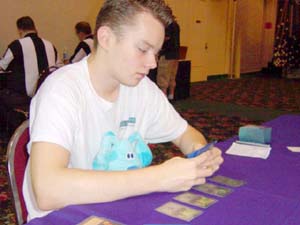 Hegstad wished for a Mutilate that could hit enchantments.

Hegstad took a long time to decide his next move, which isn't surprising; no doubt he had the U/G and monoblack matchups burned into the deepest recesses of his synapses by now, but this? He had to think about it. While he did, several generations of fruit flies were born, fell in love, grew old together, and died. Nobody said a word.

Eventually, he laid Coffers and dumped five into his pool to Diabolic Tutor, then Scryed for three during his main phase, hoping to snag some disruption to break through before Eugene took control. Eugene also considered his next move in-depth, then used his main phase to flash his other Speculated Deep Analysis, gaining a pair of Aether Bursts, and laid Holistic Wisdom.

It was now turn seven. Between turns, I stepped out briefly to catch the unedited version of Shoah.

Hegstad laid his second Coffers and used it to fire a Mind Sludge over in Eugene's direction; Harvey has no counter. The Bursts and a stray Krosan Verge fall into the graveyard. "That's some nice work," he said. "That'll do."

The path cleared, he dropped five into his pool, getting a Diabolic Tutor and finding a Shade and casting it. Harvey flashed the Speculated Insight back, removing three cards to put an island in his hand, then Compulsioned three cards down to the best card out of the three: A Speculation. On his turn, Harvey Speculated for Crush of Wurms and two Moment's Peaces, which would blunt the one-hit kill of Hegstad's Nantuko Shade.

"You're at thirteen," Hegstad muttered under his breath when his turn rolled around, and Harvey confirmed it with a laconic "Yep." He could finish Harvey off in one round if it wasn't for that damn Peace...

He looked at the Crush of Wurms, which was Japanese. "That costs twelve, right?" he asked. "Yep," Harvey replied.

He cuddled the Blue's Clues doll in his lap, looking for advice.

Glaciers rushed past them, briefcase in hand, claiming urgent appointments.

Harvey looked to his Wisdom to see what he could salvage; he traded a Wish for a Crush of Wurms, then lost the Moment's Peaces, along with several other cards in his library - but Harvey's deck is fairly resilient against Echoes, being comprised of a lot of two-ofs and three-ofs. And the Crush of Wurms, the kill card, was safely in his hand. The Shade attacked for nine, dropping Harvey down to two after the Deep Analyses and occasional manaburn from Wake excess. Hegstad passed the turn.

"I'm just saying we have fifteen minutes left," he reminded Harvey, indicating that the two of them had spent an average of four and a half minutes considering each turn. "I'm not trying to rush you or anything."

Harvey, looking at the Shade, dropped Kirtar's Wrath with threshold, putting two Mirari's Waked 2/2 Spirit tokens into play. Realizing that even if he got rid of the tokens, he'd have to punch past three 6/6 wurms and then try to sneak a Shade past for fatal damage, Hegstad conceded to save time.

Hegstad mulliganed in silence, then mulliganed down to five; not a good start for a deck that really needs to break out with early Braids and Fiend disruption in order to stall the Wake long enough to win. Harvey mulliganed right back, but he was drawing and was now up two cards. Pressed for time and realizing that a draw would mean a match loss for him, Hegstad slapped down three swamps in quick succession and went for the Rancid Earth... But Harvey had the Envelop. On his next turn, Harvey laid an forest, getting all three of his colors, and cast Far Wanderings - a card so bad that most pros refuse to play it in draft decks, but is worthwhile in this deck. (Anyone who said that they knew Far Wanderings and Tireless Tribe would show up in respected decks is lying.) He fetched a plains; in response, Hegstad Scryed for one, desperately trying to draw disruption.

Hegstad summoned Braids - his main hope of defeating the Wake deck. Unfortunately, Harvey sacked a plains the next turn, then dropped a Wake, thereby defeating Hegstad's strategy of attacking Harvey's mana base; when every land produces two mana, it's not nearly as painful to sacrifice one. 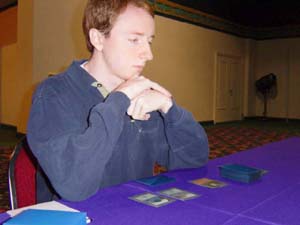 Braids attacked; Eugene Living Wished for, of all things, Major Teroh, who seemed relieved to show up in a deck that might actually get to use him before he gets sacrificed. He Burst Braids back to Hegstad's hand during the attack phase, right after Hegstad had fed yet another a swamp to our favorite psycho; rather than recast her and sacrifice another much-needed swamp during his upkeep, Hegstad instead Scryed again at the end of Harvey's turn, this time for three, searching for anything that could stop this slow juggernaut of a deck.

On his turn, he recast the Burst Braid and Diabolic Tutored; Eugene considered the Envelop, and opted to stop the Tutor in its tracks - mainly because Hegstad had only three cards, and Harvey wanted to keep him low. At the end of Hegstad's turn, Harvey broke open a Krosan Verge to get him two lands as extra Braids food, then laid the Wished-for Major Teroh to get rid of Braids.

Hegstad responded by Rancid Earthing Eugene's open plains, forcing him to use Major Teroh or lose him, and cast a Zombie Infestation in a desperate attempt at a win condition... But Harvey then Speculated on his next turn for Deep Analysis, Flash of Insight, and Crush of Wurms. Hegstad wisely conceded.

It wasn't even close. Hegstad needed a heavy-disruption draw to defeat Harvey after sideboarding - and despite much Scrying, the five-card mulligan took the wind out of his sails. The wind poured into Eugene Harvey's sails, however, carrying him to a juicy victory.