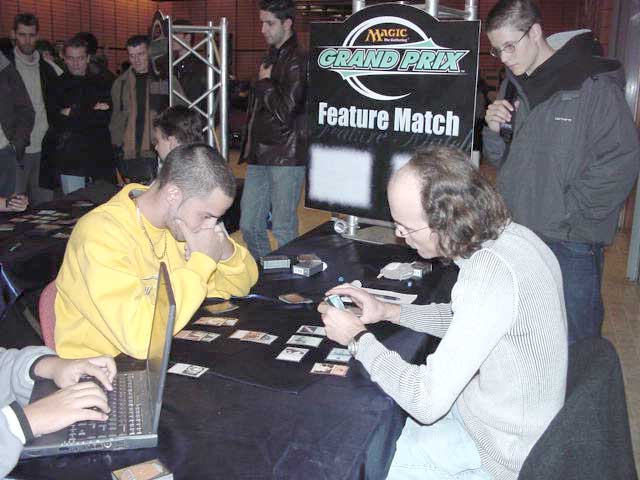 The very last round today sees two more than accomplished players fighting for a day 2 berth. Rafael Gennari has been a little silent on the Pro Tour scene after his PT top 8 in New Orleans but he's still considered to be Switzerland's best player. Nicolas Labarre is one of the most consistently successful French players in the business with multiple Pro Tour and Grand Prix top 8's.

won the toss and chose to play. 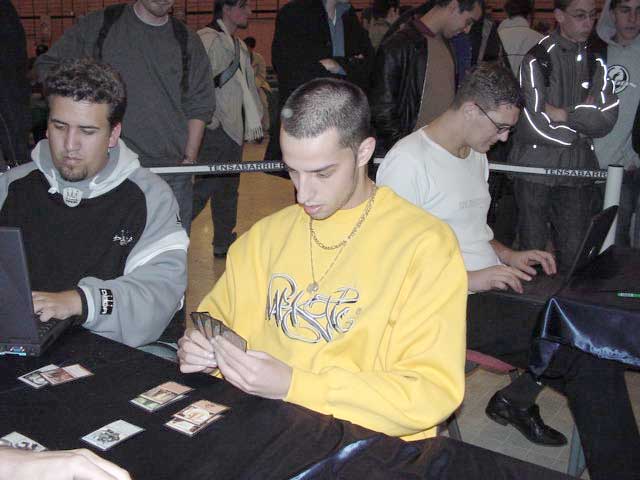 Nicolas showed all three of his colors on turn two with a black Myr, a Mountain and an Island. Rafael one-upped him with Empyrial Plate and a Krark-Clan Grunt. It came crashing in for 7 on turn 4.

Rafael played his fourth land before his attack signaling some kind of trick. Nicolas would have none of that though as a Terror killed the big 7/7. A Silver Myr took it's place. The Myr got it's beat on leaving Rafael vulnerable to a freshly summoned French Rustmouth Ogre with only a Tel-Jilad Exile on defense.

Nicolas didn't have removal though so the Troll could chump the artifact eating monster before it destroyed the Plate. Still, this left Rafael in quite a bind with the Silver Myr being his only creature in play for the moment. He had to find an answer to the Ogre if he wanted to keep attacking. A Lifespark Spellbomb would cost him a land just to chump again so he finally kept the Myr home to block and the game reached a standstill with both players trying to develop their board.

Nicolas' Hematite Golem got Shattered once before it could get out of hand but with the Shard on the board it wouldn't be long before it would become a problem again. Sure enough, Nicolas returned the artifact creature. Rafael had an Arc-Slogger but that tapped him out so when Nicolas Shattered the Plated Myr the Ogre came crashing in, all but forcing Rafael to trade his Slogger for it. The Hematite Golem also came looking for some exta action and despite Rafael's excellent opening he seemed to be in a nigh unwinnable position now. Two swings from the Hematite Golem soon ended it as all Rafael could manage was some more equipment.

Rafael chose to go first again but this time it was Nicolas with the turn 2 Empyrial Plate while Rafael was stuck on two lands and a Myr.

Nicolas chose not to kill the Myr on turn 3 and opted for a Bottle Gnomes instead. This didn't work out too well as Rafael drew a third land and could play a Tel-Jilad Exile to stave off any Plate-fueled beatings.

The Myr got killed the turn after and the Gnomes got into the Red Zone but the damage was done as Rafael drew another land and played a Loxodon Warhammer. Another land allowed him to equip his Exile and Shatter Nicolas' freshly cast answer, an Icy Manipulator.

Suddenly, Nicolas' board didn't look too hot anymore with a Krark-Clan Grunt toting a Warhammer backed with the regenerating Exiles coming his way. A French Shatter came to the rescue killing the Warhammer but there was still the whole regenerator issue. A Clockwork Vorrac seemed like the perfect answer. 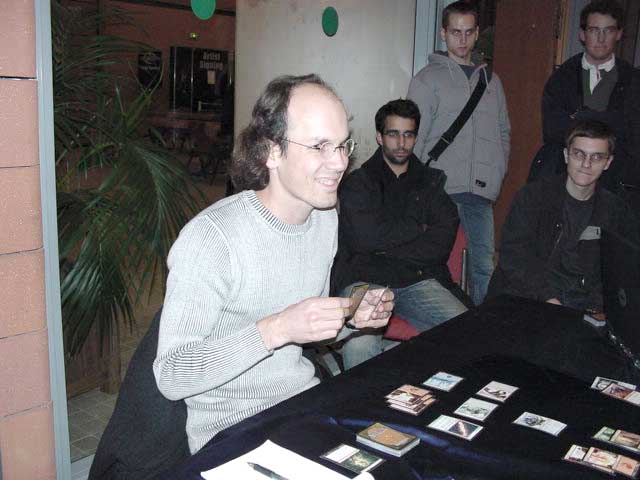 A Myr Enforcer and a Viridian Longbow cluttered the board leaving Rafael with no cards in hand and no answer to the self-pumping trampler. It seemed like it would only be a matter of time before the Clockwork monster could come in for the kill, especially when backed up with the Plate.

A Skeleton Shard sealed the deal a turn later leaving Rafael with no way to deal with the Vorrac. And when the Hematite Golem made an encore performance the writing was on the wall and Nicolas was the one advancing to day 2.

Game, match and a day 2 berth to Nicolas.