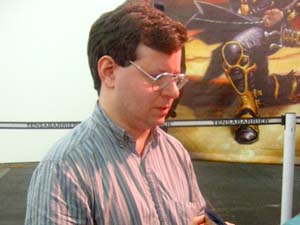 here we are, the deciding round. The winner gets six rounds and two drafts tomorrow but the loser gets the bitter taste of falling on the last possible hurdle. With such a large player field, cutting down to sixty-four contenders is very, very tough. Still, it's not surprising to find one of the few players who has won a GP, PT and Masters playing for the right to come back tomorrow.

Across the table sits Frank Karsten. He's Dutch. That means he is a good Magic player, probably drafting every single week against players as good as you expect in any Grand Prix Top 8. That kind of training only leads to good results.

Things got off to a junky start, with no one seizing the game right away. Pustilnik played Serum Tank, Sun Droplet and Gold Myr while Karsten played Krark-Clan Grunt and Granite Shard. Gabriel Nassif leaned over the barrier to warn them Pustilnik had missed something on Serum Tank.

The Granite Shar tried to eat up Pustilnik's Myr and used it to power out Shrapnel Blast, effectively icing the Grunt. Karsten played a Neurok Familiar that revealed a Bonesplitter. Pustilnik laughed. Karstem found a big carrier for his equipment in the solid shape of Myr Enforcer. Pustilnik dropped Megatog and used Deconstruct to blow the Enforcer up and played Bonesplitter.

Karsten grabbed his pen and worked out the damage math. Satisfied with his calculation he played another Myr Enforcer and gave him the axe to play with. It didn't last long. Pustilnik sent his Megatog in eating up all of Karsten's blockers by sacrificing artifacts.

A turn later, the Dutch conceded.

Karsten: "You could have killed right there."
Pustilnik: "I missed that. I would look really dumb if you had Crystal Shards."

Karsten played a second turn Neurok Familiar but this time he revealed a land. Pustilnik played turn three Serum Tank. If that seemeed good wait until you read Karsten next turn:

The American played and sacrificed Chromatic Sphere to power up a crucial Deconstruct.

Karsten: "What? How lucky!"

Rid of the troublesome equipment, Pustilnik started dropping creatures. He tried to stop Karsten's incoming duo (Familiar and Ogre Leadfoot) but the Dutch had Electrostatic Bolt. The American did manage to clog up the ground with Auriok Steelshaper wearing Vulshok Gauntlets.

By now Karsten knew he had to move fast. His opponent was adding counters to Serum Tank like a madman. When Pustilnik dropped Mindslaver Karsten's eyes widened. He played Bonesplitter and sent six damage in, dropping Pustilnik to five.

The American drew one more card and blew up his Mindslaver. Karsten's hand was Domineer and two lands after the draw. The Ogre lost his Bonesplitter and walked right into the Steelshaper. That was the worst Michael Pustilnik could do.

On his next turn, Pustilnik played Myr Enforcer and sent his Steelshaper in, finally dealing some damage to Karsten. The Dutch answered with his Neurok Familiar dropping his opponent to two.

Karsten: "I don't trust you one bit. Why did you play that Myr Enforcer when you know I have the Domineer?"

On and on Karsten thought about the situation. Either Pustilnik had made a mistake or he had something up his sleeve.

Karsten: "You must have a cunning plan."

Finally he decided to play it. He Domineered the Myr Enforcer. Pustilnik untapped, got his Gauntlets back and played a second one. The huge Steelshaper stepped into the Red Zone. At fourteen Karsten could afford to take one hit (ten damage) and strike back for the win. Unless Pustilnik had a way to deal four damage - something like Shrapnel Blast.

The Dutch thought about it and decided he wanted to block. Out went the stolen Myr Enforcer. Shrapnel Blast took out Karsten's Familiar. He replaced it with Yotian Soldier. A turn later Pustilnik conceded. At the end of the round, Pustilnik explained he could've won the game if he had kept open mana to Shrapnel Blast his Enforcer away when Karsten used the Domineer.

They nervously shuffled for Game 3, before storming through the first few turns with only fifteen minutes on the clock. Pustilnik's first play was Leonin Den-Guard, while Karsten used Neurok Familiar to draw a Talisman. While the Dutch worked on his mana, Pustilnik put the pedal to the metal.

He played Fireshrieker and Auriok Steelshaper. Shrapnel Blast took out the Den-Guard and Karsten decided to speed things up as well, but in a bigger way: Empyrial plate. It wasn't really a race unless Pustilnik could find a way to slow down the flying Dutch Empyrial Plated Neurok Familiar.

The American attacked, played a Cathodion and handed over the Fireshrieker, suddenly we had a race all over again. Another Familiar swing brought him down to eight. After thinking for a minute Karsten dropped Ogre Leadfoot to hold power his strike force.

Pustilnik sent his Cathodion in and used Deconstruct to destroy the Plate.

Karsten: "Did you topdeck that?"
Pustilnik: "Hmmm... no comment." 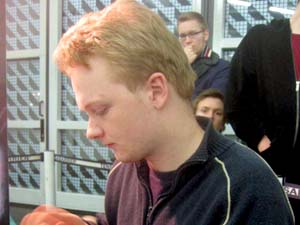 Just like that Karsten was in trouble. He pecked away with the now much smaller Neurok Familiar but Ogre Leadfoot was all he had to balance out the ground war. Pustilnik sent in the Fireshrieking Cathodion and the Dutch dropped a brutal Electrostatic Bolt. A Shrapnel Blast turned dying artifact into something useful, killing the Ogre.

The mana burn dropped Pustilnik to four. The Familiar dropped him to a mere three. Karsten played Cobalt Golem to hold the fort and passed the turn. Another swing brought Karsten to four.

The Familiar and Cobalt Golem flying duo was too much for Michael Pustilnik to handle on the next turn.