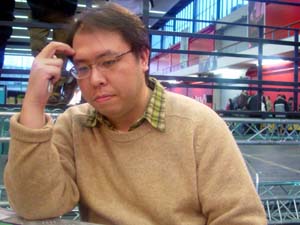 is one of Japan's true veteran players, having been around since long before the game was even released in Japan. He's come very close to making the Top 8 of a Pro Tour on numerous occasions, and came in ninth on tiebreakers at Japanese Nationals last summer. He's in position to make a run at that elusive Top 8 once again, coming into this round with a 6-2 record. Japanese players have made the Top 8 of the last four individual Pro Tours, but it would be nice to see one of the old guard get his due. Remie made Top 8 of Worlds in Berlin back in August, and so far has a 5-2-1 record in his native country's Pro Tour.

Fujita played Viridian Longbow, slipped with his hand, and accidentally revealed Blinding Beam. This got a huge laugh out of both players, as Remie slowly named the card as he wrote a reminder on his scorepad. Fujita played a Den-Guard and Gold Myr, while Remie had Cathodion. The Longbow went on the Den-Guard, letting it get through for two damage. Remie played another Hill Giant in Goblin War Wagon, and ended his turn. Arrest dealt with that threat, and Fujita made his side a little more threatening with Golem-Skin Gauntlets. Consume Strength killed the Gold Myr, and Fujita took his turn, attacking with the Den-Guard and summoning Fatespinner. Remie played yet another War Wagon, and Fujita played Goblin Charbelcher. With Remie already at nine due to early attacks and the Longbow, along with Fatespinner slowing things down, the Charbelcher was quite threatening. A few turns later, Remie conceded.

Fujita opened with Leonin Elder, and once again, a card slipped out of his hand- Pearl Shard. Fujita almost fell out of his chair laughing. 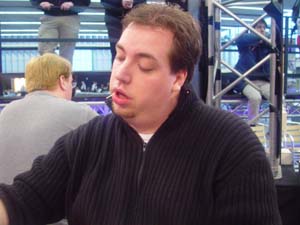 Remie- "Am I this bad that I need all this help from you?"

Fujita played Leaden Myr, and used Viridian Longbow on the next turn to deal with Nim Lasher. Remie's Wagon was matched by Fujita's Myr and Auriok Steelshaper, and thanks to the cost of moving the Longbow being reduced, Fujita looked to move it around his creatures to deal three to the Wagon. Instead, Remie cast Blinding Beam in response to stall that plan for a bit. The Wagon attacked for three more damage, and was followed by Spikeshot Goblin. This was nullified by Arrest, and Fujita played his second Steelshaper, which combined with the Longbow let him pay one mana and tap any creature to deal a point of damage. Loxodon Warhammer turned things from ugly to massacre, and Remie conceded.