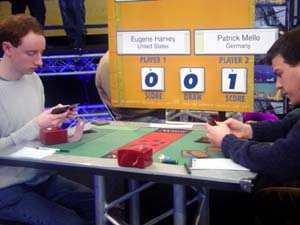 knows that "Eugenius" has been one of the top US players for several years now. What people don't know, however, is that his intelligence is matched only by his willingness to party. Unfortunately, he does well at Magic events so consistently that he's always going to sleep early, preparing for the next day of crushing all who oppose him. As former National champion, he would never let his country down.

There was speculation that even Eugene would fall to the lure of Amsterdam's nightlife, but on the contrary, he seems more alert than ever. When asked if he had a better deck, he would only say, "The draft was very strange. Everyone took the same colors as the guy to their right, and that…continued, even after people switched."

Patrick Mello has also been a top player for his native country of Germany for many years now. Lately he's been concentrating more on school, so he freely admits that he hasn't practiced much with this format. Despite that, his natural skills have taken him to a 6-2 record.

Mello won the die roll, chose to play first, and kept his hand. Eugene thought and thought, but eventually decided he had to ship it back. This sparked an amusing conversation about our collective hatred for reporters using phrases like "he took a trip to Paris" and "the mulligan reared its ugly head". Anyway, Eugene went down to six.

Mello started with Swamp and Viridian Longbow, matched by Eugene's Forest and Pyrite Spellbomb. The German had a Talisman of Unity, while Eugene had to sacrifice his Spellbomb to search for a second land. He found a Mountain.

Mello played a fourth land and the devastating Crystal Shard. On Eugene's upkeep, he targeted the Myr Retriever with the bounce effect. Eugene paid to keep it around, but could do nothing else on his turn. Mello equipped his Lasher with the Longbow and then played Alpha Myr, leaving one card in hand and an Island untapped. Eugene, still without a fourth land, could only add a 1/1 Slith Predator to the table.

On end step, Mello attempted to return the Retriever and shot the Predator. He untapped, actually returned the Retriever and attacked with a 5/1 Nim Lasher and Alpha Myr. He followed up with a second gigantic Nim Lasher. Eugene drew and picked up his cards.

Eugene sided in a Swamp and Wail of the Nim for Forest and Ogre Leadfoot. Mello sided out an Alpha Myr for Psychic Membrane.

The conversation turned to a discussion of the dilapidated Hobart House in Pittsburgh, PA. It has long been a haven for gamers from all countries, although it's beginning to show some signs of wear and tear; as in, most of the plumbing doesn't work, the living room might collapse any day now. You know, the usual.

It was now Eugene's turn to keep his hand. Mello, on the other hand, rented a moped in his hometown of Hamburg and rode westward. Somewhere around the French-German border he ran out of gas, but the kindness of a passing truck driver allowed him to make it all the way to Paris. In the span of a day he met a girl and fell in love, but had to return to Germany for his class on Molecular Thermodynamics. A week later, he missed her so much that he just had to visit once more.

Back in Amsterdam, Mello was now at five cards. 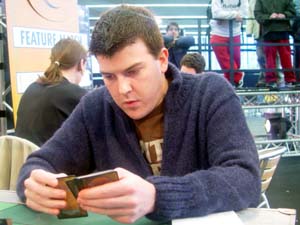 Eugene opened again with Forest and Pyrite Spellbomb. Mello matched with Island and Steel Wall. Eugene's turn two Slith Predator had nowhere to go. Mello chuckled and played out a Talisman, then on his next turn, paused and surveyed the board. "Quite good for a double mulligan," he said as he tapped all but Seat of the Synod and placed down a Crystal Shard. Eugene could only play a Swamp and say go. Mello added Nim Lasher, but lost his Crystal Shard to a Shatter.

Eugene tapped all five lands for Fangren Hunter. Mello paid two for a Thoughtcast and undid one of his two mulligans. He played a third Swamp and passed the turn, still with a 4/1 Nim Lasher. Pyrite Spellbomb was sacrificed to kill the Lasher and both creatures attacked. Slith Predator was blocked by Steel Wall and Mello took four, then Eugene added a Goblin War Wagon. On Mello's turn he played out Alpha Myr and a two mana Somber Hoverguard.

The former US National Champion sent with the Fangren Hunter for four and, more importantly, played out a second one. Mello could only shake his head. During his main phase he Irradiated one of the Hunters. Eugene untapped and attacked with War Wagon and the remaining Hunter. Somber Hoverguard and Alpha Myr stepped in front of the Hunter and Steel Wall jumped in front of the War Wagon. Battlegrowth took down the Steel Wall and four creatures went to the graveyard.

The match paused so that the blood could be cleaned off the red zone.

Eugene replenished his forces with Copper Myr and Myr Retriever. Mello could only stare at the four creatures opposing him and wonder what to do. Clockwork Condor was his best option. Eugene sent the 4/4 War Wagon and Myr Retriever (threatening to get back Pyrite Spellbomb) into the red zone. Mello blocked the Retriever. The Spellbomb came down and Eugene was done, with the life totals standing at twenty to seven.

Mello played out Skeleton Shard, activated it to retrieve Alpha Myr, and summoned the small artifact creature. On end step the potion blew up the Condor.

Everyone charged into the red zone. Alpha Myr blocked Slith Predator and Wail of the Nim regenerated Eugene's side. Mello was now at two life. He drew and then conceded.

Riffle shuffling and the murmur of the spectators were the only sounds as they prepared for the final game. Both players chose to keep their hands.

In a repeat of Game 1, they started off with Viridian Longbow and Pyrite Spellbomb. Eugene had Copper Myr this time, though, while Mello waited for a turn three Nim Replica. The Spellbomb took it down, Copper Myr attacked for one, and Myr Retriever was summoned. Mello played out a second Longbow and Thoughtcasted for two mana, but didn't find a fourth land.

Eugene fulfilled every Green mage's goal in this format: the turn four Fangren Hunter. Mello added Steel Wall and Wizard Replica then sent the turn back. A devastating Mask of Memory was equipped onto the Fangren Hunter and it pounced into the red zone. Mello could chump with Steel Wall and deny Eugene the cards or he could just take the damage. He chose the latter and Eugene drew two, then pitched Forest. He played out another Pyrite Spellbomb.

Mello found Ancient Den, asked how many cards Eugene had (the answer was two), and summoned Clockwork Condor. He was under too much pressure to use either of his Longbows yet.

Fangren Hunter continued its relentless assault; Mello triple blocked with enough power to take it down. Eugene killed Clockwork Condor and regenerated with Wail of the Nim, then used Pyrite Spellbomb to finish off the Wizard Replica, leaving Mello's side devoid of power.

Mello played a sixth land, laid down a Vulshok Battlegear and equipped it onto Steel Wall. Eugene moved Mask of Memory onto Myr Retriever and sent with that, Copper Myr, and Fangren Hunter. The giant wall blocked Myr Retriever, which got back a Spellbomb, and a second Fangren Hunter arrived. Mello could only wonder where his three Irradiates were hiding.

He moved one of the Longbows onto the Steel Wall and cast Consume Spirit on the Silver Myr for one. Eugene moved Mask of Memory onto Copper Myr and the team of two Hunters charged in alongside. The 3/6 Wall had to block a Hunter and Mello fell to five. Eugene had the option of using his Spellbomb to finish off the Wall, but instead he chose to summon a Pewter Golem. The Wall finished off the wounded Hunter. 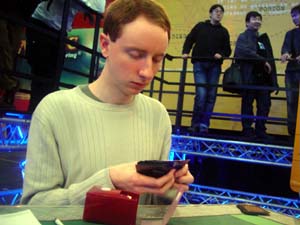 Mello emptied his hand of a Talisman and a Lumengrid Auger. Eugene pondered how to most efficiently end this game. He chose to kill the Auger with his Spellbomb, and then attack with the team after equipping the Mask onto Pewter Golem. Steel Wall stepped in front and shot the Myr before damage, leaving Mello at one. Time to topdeck. Mello drew and could do nothing.

Eugene placed down Viridian Longbow, giving him multiple different ways to finish Mello off. The spectators chuckled and Mello could only drop a Swamp onto the table.

1 Journey of Discovery 1 One Dozen Eyes