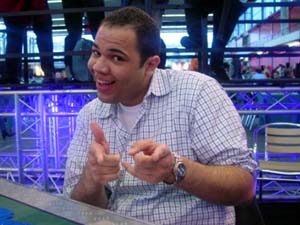 shuffling up for their match, Anton Jonsson (currently 9-0) and former Clown Prince of Magic Osyp Lebedowicz shared a story about how Kamiel Cornelissen took a card from Nicolai Herzog during the draft.

"Herzog got this look and just slammed down an Awe Strike and stared at Kamiel. Kamiel had this look on his face like he was five and had just stolen cookies from the cookie jar." - Osyp Lebedowicz

Once the match started, though, Osyp was all business. His first two plays were Leonin Scimitar and Loxodon Warhammer. He had a hand of removal, but when Jonsson paired his Mask of Memory with Troll Ascetic his face fell. Sure, he had the Electrostatic Bolt for Leonin Skyhunter, but the 3/2 regenerating untargettable was something of a problem.

Then came Fangren Hunter. Lebedowicz had his Hammer in the hands of an Auriok Transfixer and hoped to save the day with Awe Strike, but Jonsson just chuckled and showed him a Razor Barrier for protection from white, bringing home the many-for-one. Lebedowicz's last hope was a Titanium Golem to hide behind, once it got the Hammer. He even had Arrest for the troublesome Hunter. However, Jonsson showed him Living Hive, and that was enough.

Lebedowicz gave the hammer to his lowly Wizard Replica and started draining Jonsson. Jonsson made a Wizard Replica of his own but refused to block. Next came Gilded Lotus to enable a Wurmskin Forger, and finally his defenses were solidified. A 3/3 Forger and a 4/5 Patrol were enough to keep the big nasties away.

Lebedowicz had meantime made a Goblin War Wagon and moved the hammer over. He bashed in and Jonsson put the Forger in the way. Again, Lebedowicz had the Awe Strike. Jonsson finally drew the Rustspore Ram to remove the Warhammer, but Lebedowicz was on the offensive and Vulshok Gauntlets would do just as nicely.

He put them on the Wizard Replica and dropped Jonsson to one. Jonsson entwined One Dozen Eyes, but needed to stop the flier. When he finally double-blocked, Lebedowicz had the Electrostatic Bolt to save his creature, and a turn later they were on to the final game.

"I don't play Team Pro Tours any more. I hate them. If I get 50 Pro Points, I'm teaming with a shoe and a goose. I've already bought the goose." - Osyp Lebedowicz

Jonsson kicked off with Leonine Scimitar, and Lebedowicz countered with Transfixer. Jonsson got out an Elf Replica. Lebedowicz developed his own board with Wizard Replica, accepting three if Jonsson picked up the sword and swung. However, he also had Mask of Memory, making that one swing particularly painful. 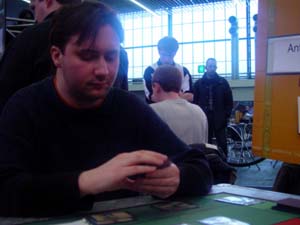 Lebedowicz was tight on mana, just four lands and then an Iron Myr. The Transfixer locked the Replica down. Jonsson dropped Fangren Hunter. Lebedowicz struck. Shatter on the Replica, Arrest on the Hunter. It looked good. That is, until Jonsson showed him a Razor Barrier.

He put both his equipment on his Hunter, and then for good measure added Bonesplitter. Lebedowicz made an Arc-Slogger and took some more pain. By the time he could trade, Jonsson had made five insect tokens and was swarming his life total. Another turn and Jonsson was the winner.