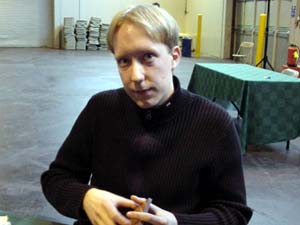 Mattias Jorstedt and Richard Moore ended yesterday with perfect records. Jorstedt is the winner of PT Yokohama while Moore is an amateur. To his credit Moore has put in some steady performances on the PTQ circuit in England but this will be a tough test for him as Jorstedt has a fairly strong black-red deck while Moore is stuck with an ungainly lumbering green-white deck.

Jorstedt went first and started with a Specter's Shroud, an innocuous piece of equipment that had proved very useful to him yesterday as well. He stuck it on a Krark-Clan Grunt and after Echoing Ruining Moore's Vulshok Morningstar netted a Tangle Spider from Moore's hand.

Moore bust out a Tangle Golem to take the offence back to Jorstedt and chumped the Grunt with a Transfixer to prevent the loss of more cards. Moore made a Darksteel Ingot, losing a Plains from his hand to the Shrouded Grunt.

A Pearl Shard came out for Moore but it wasn't doing enough to stem the bleeding. When an Alpha Myr appeared Moore was facing down three creatures with none of his own. He scooped and went onto the next game.

Moore chose to play in the second game and was less than pleased with his hand. He managed to summon a Transfixer while Jorstedt brought out a Arcbound Stinger. He used a pound coin to represent the +1/+1 counter.

"Mine's only worth 1p," Moore said, summoning his own Stinger and dropping a penny on it.

Spikeshot Goblin put in an appearance for Jorstedt and was followed by an Alpha Myr. Moore ramped up his mana with a Darksteel Ingot. The Ingot allowed him to summon a Tangle Golem.

Jorstedt replied with a Golem of his own: Pewter Golem.

Moore reached 6 mana and passed his turn without playing anything. 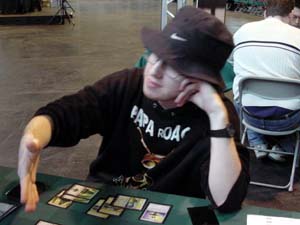 Sure enough it jumped into play and Moore zipped in with the Spider and Golem on the following turn. He added a Pearl Shard to reduce the damage from the now 5/3 Pewter Golem.

Preventing two damage wasn't really enough as Jorstedt attacked with both his goblin and golem and then cast Savage Beating with entwine. Richard took … well a Savage Beating really. The card really does do exactly what it says on the tin.