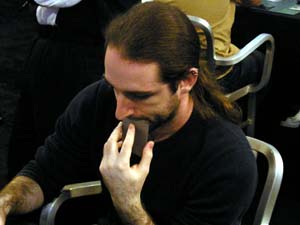 Gomersall has been anticipated to be the next big thing to come out of Europe. Whereas England was once considered a major force in Magic, the glory days of Hampton Court Palace and the best tech in the world seem to be a distant memory. Gomersall could be the man to bring back that tradition in some way, and thus far he's proving that the hype is justified. He's very familiar with his opponent this round- back when Gary Wise was living in Hampton Court Palace, Gomersall used to drop by and draft with the rest of England's top players.

Wise played Vedalken Engineer, and Gomersall had Neurok Familiar. Thirst for Knowledge provided Wise with some more cards, and the Familiar attacked for one before being joined in the air by Neurok Prodigy. Wise's Engineer swung back, and he played Lumengrid Augur. Gomersall's team attacked through the air for three, and Nim Shrieker provided yet another flier. Wise played his own Nim Shrieker, which was only 1/1 but could at least block and kill one of Gomersall's fliers. It blocked Gomersall's Shrieker, and Gomersall had a Scale of Chiss-Goria to keep his alive.

Wise- "That was dirty."
Gomersall- "You're right, that was very dirty."
Wise- "This game isn't going much longer, I'm not going to lie."

Even though Wise was behind, he did draw a Viridian Longbow to kill the Shrieker. Still, Gomersall had Frogmite, Myr Enforcer and Pewter Golem, making a comeback hard to put together.

Gomersall mulliganed down to six. Wise played Viridian Longbow, and on turn two an AEther Spellbomb, cycling through it. Neurok Familiar found a second Longbow, and Gomersall played a Scale on end step. He then untapped, and played Frogmite for one mana thanks to artifact lands. The Familiar attacked, and Wise's Shrieker died to Echoing Decay. Gomersall was stuck at three mana, but still able to play Myr Enforcer.

Wise- "See, the problem with this matchup is that he just has a better deck than me."
Gomersall- "What? The guy with two Bows says this?"

Wise summoned an Engineer, and Gomersall played an Arcbound Worker, still looking for more land. Meanwhile, Wise continued to develop his board with Nim Replica, and put the Longbow on the Familiar. Gomersall sent his whole team in for an attack, and the Frogmite and Replica traded. Wise played Disciple of the Vault and AEther Spellbomb, then put the other Longbow on the Disciple. Wise was at seven, but with the Longbows set up it appeared that he was ready to stabilize the board. He let the Enforcer get through once again, bringing him to three. The Longbows then got to work, clearing all of Gomersall's creatures off the board. Even Myr Enforcer wasn't safe, thanks to Echoing Decay. Pewter Golem didn't stick around either, as Wise stole it with Domineer. A few turns later, Gomersall conceded. 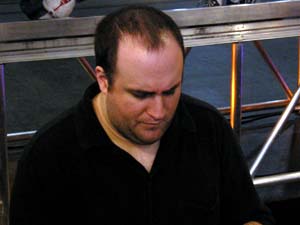 Once again, Gomersall mulliganed his opening hand. Wise played a first turn Disciple, and an AEther Spellbomb was cycled. Gomersall summoned Neurok Prodigy on turn three, and Wise had Spikeshot Goblin. Echoing Decay handled the Spikeshot, and the Familiar attacked for two. The Disciple swung back, while Wise added Wizard Replica and Steel Wall to his side. Gomersall played Soldevi Simulacrum and Wise played Banshee's Blade, giving it to the Replica. It got through for damage, and the Blade started to grow. Gomersall gained a little card advantage with Chittering Rats, and played a Neurok Transmuter, which was quickly killed with Echoing Decay. The Blade continued to get more powerful as the Replica attacked, and Gomersall attacked back with his Prodigy before playing Nim Shrieker and Frogmite. Echoing Decay killed the Frogmite, and Gomersall played Bonesplitter, giving it to his Shrieker for an attack that brought Wise down to five. Gomersall had too many fliers to handle, and the game ended a turn later.