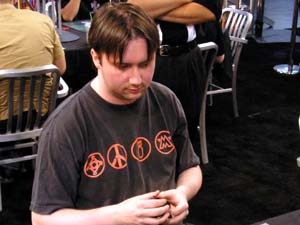 Jonsson lost the last round after going 7-0 to start the weekend. His opponent Ben Seck was paired up against him with a 6-2 record. Anton did not relish the prospect of losing another match to kick off Day Two, "This match is so important to me. I lost my first round today and if I start the day 0-2 after 7-0"

The two players were on either end of a three player green pile-up during their draft. Anton opened Viridian Shaman while Gerard Fabiano and Ben Seck to his right both opened Loxodon Warhammers. Both Anton and Ben took second pick Shatters while Ben Seck debated between Thirst for Knowledge and Fangren Hunter. He took the Thirst and the Fangren Hunter sent Gerard into green-red with Anton green-red after two picks as well. Ben then switched into green on his third pick when he was passed One Dozen Eyes. He would also get a pair of Creeping Molds picks eight and nine. There were five straight players without a green card in their piles and that sent some crazy signals around the table. In the second pack just when Anton thought he was getting out of green they pulled him back in with a sixth pick choice between Viridian Shaman and Deconstruct--of course the Deconstruct reconfirmed Gerard's belief in green as well.

Ben Seck led off the match with a Forest which raised Anton's eyebrow, "Green?" Suddenly he began to understand where the draft went awry. He played his own Forest and declared, "I am green too."

Anton was more startled by Ben's Island, "Green-blue?" Ben played a Wizard Replica. Anton had a Pyrite Spellbomb. After attacking for one in the air Ben cast Thirst for Knowledge for his fourth land--he discarded Copper Myr.

Anton's fourteenth pick Exile came down on turn four but it could not halt the ferocious beats of the Wizard Replica and he fell to eighteen. Ben put out a more formidable threat in Tangle Golem but Anton had the Viridian Shaman ready for the next turn.

Ben sheepishly played his Warhammer and went to equip his Replica. Anton shrugged, "I will Shatter."

Ben asked to clarify which artifact was the target, "The Warhammer?"

Anton rolled his eyes, "Yes, I will Shatter the Warhammer."

Ben played out his combo of Tel-Jilad Chosen and Neurok Transmuter but Anton knew better than to let that stick around and he promptly killed the Transmuter with his Spellbomb. When Anton attacked he traded his Shaman for the Chosen and used Echoing Courage to kill the Wizard Replica with his Exile.

The game settled into an exchange of beats between a Neurok Prodigy and the Exile. When Anton put out his Goblin Replica Ben quickly Oxidized it. He revealed his urgency when he tapped out to play Pentavus. Anton slumped, "That is probably game."

He got in for two more points of damage with his Exile and glumly passed the turn. He had Essence Drain to get Ben as low as three and Ben braced himself for a Barbed Lighting but Anton was out of gas. He had gone up to nine from the Drain and that bought him one turn to draw a Predator's Strike--his only out. His draw yielded nothing and they went onto Game 2.

Chromatic Sphere from Ben was cycled into a turn two Copper Myr. Anton killed it with his Shaman and then took down Ben's Alpha Myr with Echoing Courage on the next turn. His second Echoing Courage took out a Wizard Replica.

Ben had no play after that and the Shaman finally got in for two. Anton played Clockwork Vorrac. Ben made a 5/5 creature with One Dozen Eyes and Creeping Molded the Vorrac on the next turn. Anton took five from the token but cracked back for five of his own with his Shaman and a hasty Berserker.

Ben played Aether Spellbomb, "Not that I am going to bounce your guy."

"C'mon, please?" Ben also cast Thirst for Knowledge while Anton stared at lands. "You are having all the fun while I am not." Ben discarded one Frogmite and played another. The Frog ate the Berserker and Anton fell to five on the next turn. A turn later he laid down a hand of lands and proclaimed, "This is not going to cut it." 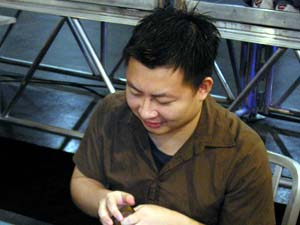 Ben sheepishly showed him his hand which contained Oxidize, Warhammer, and Regress.

After the match they talked about the specific picks each player made to put three consecutive drafters into green. Anton concluded that the only thing he could have done differently was to take Somber Hoverguards with his second and third picks--something he could not justify even in hindsight. Both players were now 7-2 with good tiebreakers and would likely be seated at the same draft table for the next pod. It will be interesting to see how that draft plays out.