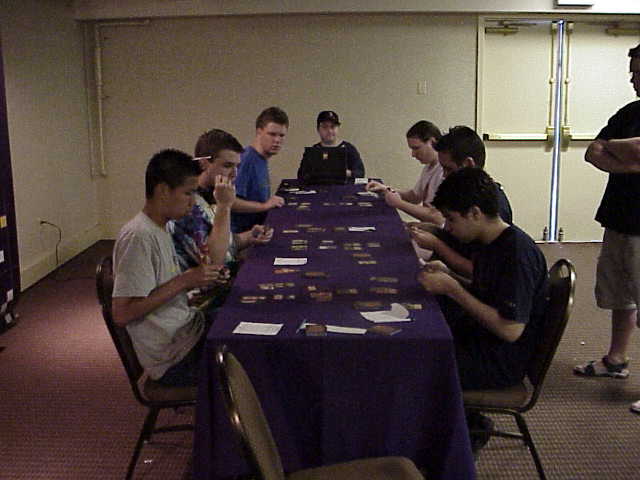 Ken struck first with a Crypt Creeper, and used Fiery Temper to clear out a third turn Cabal Torturer. The Creeper traded with a Gravegouger shortly thereafter, and Ken kept on the pressure by removing Rood's sole Mountain from the game with a Petravark. Creature removal traded back and forth, Ken casting Morbid Hunger (flashing it back) and Ember Shot to a Morbid Hunger of David's own, which was aided by a Fiery Temper. Ken ended up drawing more creatures, and eventually came on through with a bunch of two power guys for the win.

Brian started the game early with a second turn Escape Artist, and followed it up with an early Deep Analysis. Elijah started applying pressure with a third turn Skywing Aven and a Ghostly Winged Nullmage Advocate. By the time Brian could draw a flyer of his own (Wormfang Drake), he was low enough to fall to an alpha strike from his opponent.

Ken began as mana heavy as the first game, but David had problems finding his fourth land, and was stuck on three until turn seven. Ken had drawn ten lands by this point, and faced down a freshly summoned Pardic Collaborator. At ten life, Ken drew an Ember Shot to deal with the pumper, only to draw into two more lands (one from his draw phase, and one from the cantrip). His multitude of lands seemed ill suited to deal with a newly conjured Carrion Wurm, and the game ended shortly thereafter. 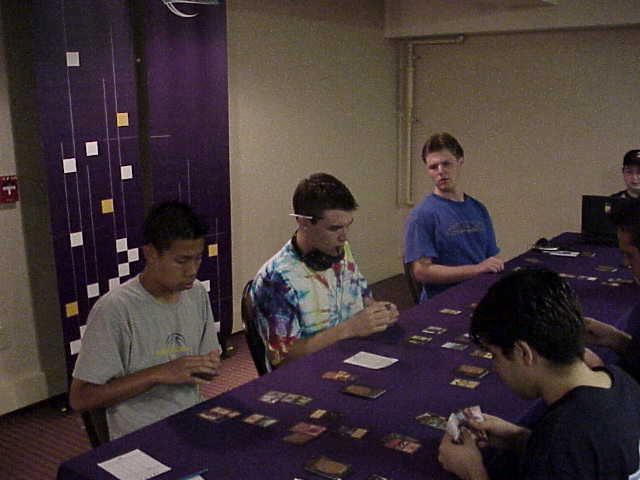 Elijah started with a sizable ground force, held at bay by a third turn Wormfang Drake. Brian cast a very powerful Mental Note, which sent both Alter Reality and Defy Gravity to the graveyard. This in effect netted him two playable cards (both have flashback) for the cost of a one mana cantrip. Although Elijah kept on pressure with a Brawn and Giant Warthog, Brian summoned forth a Wild Mongrel with a hand full of cards. A Concentrate from the Canadian evened things up a bit from the Mental Note play, and he swung with his big pig, hoping to get Kibler to lose cards from his hand to the Mongrel in order to swing some sort of advantage in the game. A Sudden Strength from Kibler ended that plan, but a second Warthog backed by a Nantuko Disciple made life horribly difficult for the Dragonmaster. Desperate for answers, Brian cast a Deep Analysis but it was too little too late as 2017 took first blood.

As is often the case, the red/black on red/black match entered its third game before the white/blue mirror match even finished its first. And as is often the case, both players traded early creatures for early removal. Once again Ken had the mana advantage, and gained card advantage via Unhinge and Crippling Fatigue. An Anarchist made the flashback sorcery a three-peat, and while Ken drew more lands than spells once again, David got stuck at four mana and lost holding a hand full of threats. 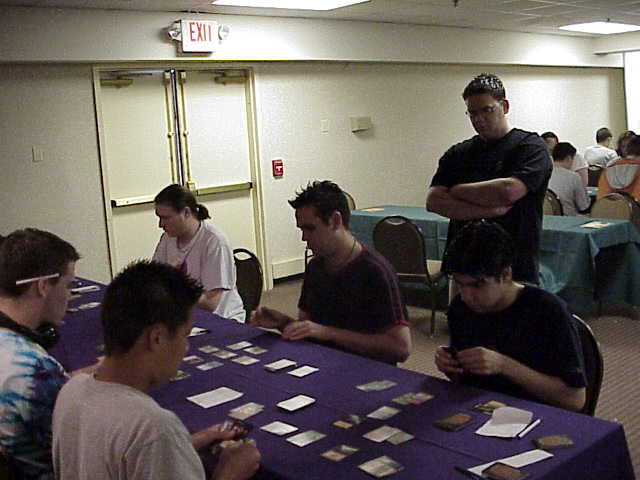 Guillaume started the game with a very devastating defense, playing out a second turn Mystic Familiar and enchanting it with a third turn Unquestioned Authority. Ben's draw of Anurid Brushhopper and Dreamwinder was half-stifled by this creature. It was joined by a Basking Rootwalla and Battlewise Aven, and his hefty hitters were matched by an all-star defense of the previously mentioned Familiar, Militant Monk, and a Hallowed Healer. The game stalled out as both players added to their forces: Daoust adding a Phantom Nomad and Hydromorph Gull, and Ben a Shieldmage Advocate. The Advocate controlled the entire game, making killing any of Ben's large creatures impossible for Guillaume's small defenders. Guillaume sought to stave off the inevitable but Ben finally reached threshold and cast a thresholded Aven Warcraft naming white, allowing him to swing his entire horde past Guillaume's defenses.

The deciding match of this set began with a scant fifteen minutes left in the round. Daoust came out with a turn two Familiar which was met by a turn three Advocate on Rubin's side. The two traded on the offense, and Ben played twins with a second Advocate, joined by a Basking Rootwalla. Meanwhile, Guillaume played a sideboarded swamp, and pitched three cards to Sickening Dreams, clearing the board entirely. This left both players with three cards in hand and no creatures on board. The Canadian's hand was full of threats while Ben held on dearly to a hand full of lands. The next two turns added a Floating Shield and third Advocate to Ben's board, and a Hypochondria made the game difficult for the 2017er to win. Bringing the score to an uneven twenty to three, Daoust swung for the kill, but ran into a Madness-cast Rootwalla dropped off of the Hypochondria! This stabilized the board completely for Rubin, who now had a Shielded Shieldmage, 3/3 Rootwalla, and global enchantment capable of preventing a score of damage. This came at a price, as Rubin began to return nothing but playable cards to Guillaume's hand to stay alive. Daoust started playing and attacking with flyers, and followed them up with a Looter. He gave his Mirror WallUnquestioned Authority, and suddenly Guillaume was netting three cards a turn (Ben was returning one with his Advocate and pitching two to his enchantment), and the game ended in the favor of massive card advantage with three minutes left in the round.

It seemed as if it would take a miracle to end this match in anything other than a draw. Ben drew and plunked down a Rootwalla, following it with a turn three Brushhopper. This brought Guillaume down to ten life points by turn four. He attempted to staunch the flow of blood with a Mirror Wall, but Rubin cast Sylvan Might bringing down the Mirror, pushing through more trample damage. Time was called, with Guillaume using his first extra turn to cast Phantom Whelp and Militant Monk. On the second turn of five, Rubin swung with his pair, drawing the Whelp as a chump blocker for the Anurid. Rubin chose not to pump the Rootwalla, instead casting Phantatog with three cards in hand. Guillaume played an Aven Fogbringer and Mystic Familiar on turn three, sending Ben back down to four lands, and giving him three blockers for Ben's three creatures. With only this last turn left to win, Rubin drew nothing to break the stalemate, and half-heartedly played Floating Shield on his Atog naming white. Daoust now had two different colored creatures and blocked safely, forcing a draw.