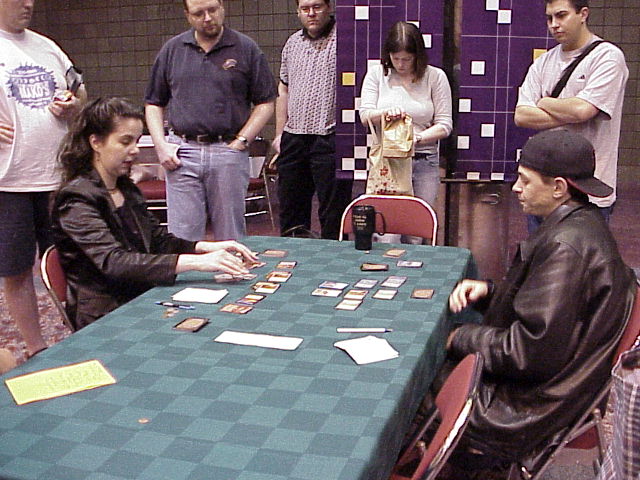 In the first draft of the day, the mighty mighty Michelle Bush had opened Blazing Specter and drafted a very potent Black/Red deck. Casey McCarrel, being passed to by Bush, opened an Annihilate, and was then immediately cut off by Michelle. He did end up playing some black in his deck though, but the four swamps he did play weren't enough for him to consider running the powerful black removal. Casey and Michelle have never played each other before, so both are careful and polite as the match begins, not quite knowing what to expect, but showing the very professionalism that defines them as Pro Tour veterans.

Michelle lost the coin flip, but Casey opted to draw first, giving Michelle's aggressive deck the chance to go first. Casey's choice is one that is heavily debated amongst Magic players, as the card vs. turn battle is one that is not an easy choice to make. Michelle came out of the gates pretty quick, laying a turn two Shivan Zombie. Casey plays a Trapper that could only watch helplessly as the Zombie came into to deliver the beats. Michelle next played an Ancient Kavu that was tapped by the Trapper and then Shackled. Her next play was a Phyrexian Slayer that was also tapped by the Trapper and Shackled! The New Orleans Police Department would have been proud of this display of confinement. Michelle, undaunted by the prison like tactics of Casey, continues to punish McCarrel with the Zombie, and laid out a Firescreamer. Casey wasn't going down easily, though, and he matched the Kavu Firescreamer with the Protection from Kavu Shoreline Raider. It would appear to anyone not looking at Michelle's hand that he had stabilized the board, but anyone that was watching her hand knew that this game was just a matter of time for Michelle to wrap up. On her next turn she Reckless Spited the Benalish Trapper and the Raider. Casey's next play of a Vodalian Serpent (no kicker) was punked by Michelle's Shivan Emissary (with kicker). Casey tries to staunch the bleeding by Probing, but he draws only into a Tidal Visionary and a Ardent Soldier. The Visionary finds itself Zapped into oblivion and the Ardent Soldier manages to take out the Shivan Emissary. Casey plays a Crypt Angel, but he needs to block both of Michelle's creatures. When Michelle plays Blazing Specter, one of her creatures will get through, and Casey enters his scoop phase. 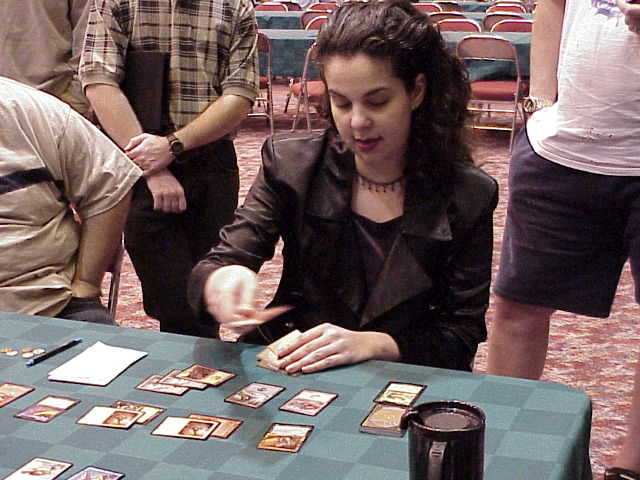 Casey is a methodical, careful player, so even though the game was furious and with lots of exchanges of control, it had taken a while. Game 2 starts with about 30 minutes left on the clock.

Michelle keeps her opening and of 6 land and a Shivan Emissary. Even though she didn't have any early beats, you can't throw back 6 land while playing a mana hungry deck. Her first draw phases brought her a Soul Burn and a Ravenous Rats, which she used to knock a land out of Casey's hand. Casey plays a Tower Drake, but it dies when Michelle pays the kicker on her Emissary. Casey plays a 5th turn swamp and a Crypt Angel, returning the Tower Drake to his hand. Michelle reveals her third color by laying an island, and burns the Angel to the ground with Tribal Flames. Casey isn't drawing the best cards in his deck though, and plays a Tidal Visionary that he hopes to trade with the Rat or Emissary. Instead, it's put into the graveyard by a Cursed Flesh, and then Michelle plays out a Stalking Assassin, which nets a groan of disapproval from Casey. The hits keep coming from Michelle, as she plays a Cinder Shade on the next turn. Casey is able to deal with the Assassin by Exotic Cursing it, but his only answer to the Shade is to move Shackles on to it. He protects the from the Shade by putting Wings of Hope on it. He plays a Benalish Trapper, but it meets the same fate as the Trapper from the first game, as the Drake and Trapper are Reckless Spited. This brings Michelle to 5 life, which matters when the next spell that Casey casts is the huge Wayfaring Giant. Michelle isn't fazed, as she lays more land and chumps the Giant with her Emissary, who had done it's job. She Soul Burns Casey for 7, and that ends the match. Michelle remains undefeated.