Round 9 Feature Match: Cowboys and Krovikans

Ben Zoz came in at 7-0-1, with an attractive shade of pinkish sleeves, while Owen Turtenwald brought 7-1 to the table and felt confident in going commando with his cards.

Both players drafted at table 1 alongside luminaries such as Gabe Walls, Billy Moreno, and Day One leader Luis-Scott Vargas, and are eager to 4-0 the table and strengthen their position to make a run at Day 3. 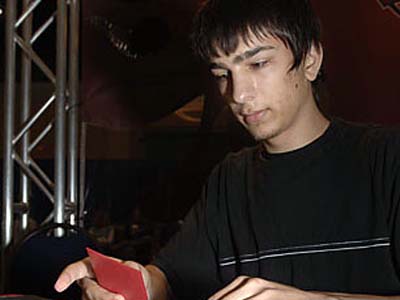 Ben Zoz sat atop the standings for Round 9.

A pair of Kjeldoran Outriders quickly hit for Owen and zoned directly into Blizzard Specter, who returned serve and took Phyrexian Snowcrusher from the hand, girlfriend.

An Outrider went and got itself Frozen absolutely Solid, but Orcish Bloodspitter came down to ease his pain and make his expendable ass actually worth something again.

The Blizzard continued to spit out Owen's life and cards like he was teeth at the inbreeding convention, and Deathmark waxed another Outrider nostalgic, with poetic thrown in for good measure. Zoz countered stuff and killed stuff, and the Blizzard felt free to roam his own bad self about the cabin like you can still smoke on international flights.

Chill to the Bone showed up to exile Owen's creatures like Napoleon wasn't the bomb at palindromes, and with both players hovering near ten life and Zoz hoarding a fistful of cards, the upper hand was clear. Playing off the top is ordinarily not a recipe for success, but Owen was able to administer just enough potential pressure that Ben couldn't simply ride the card advantage train to victory - at least not yet.

Ben added Phobian Phantasm, which stepped up on the platform and prepared to board. A last-ditch Surging Flames on the Blizzard didn't turn up a mate, and when Zoz dropped Tresserhorn Skyknight, the conductor warmed up his pipes and the fat lady joined in.

Owen's Outrider Express started on turn two, and a second came down a turn later, reuniting Butch and Sundance. They jumped into the red area of the playmate, which has earned the nickname "The Red Zone," probably because it's red and it's a zone. 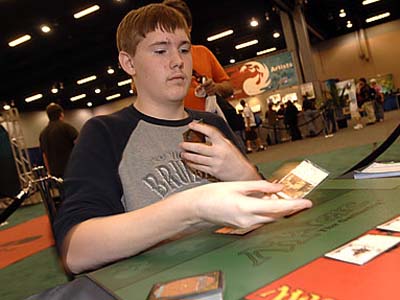 Turtenwald fought back to send the match to Game 3.

Krovikan Mist and Blizzard faced off against the Jesse and Frank James, and a "curious" block from Zoz plus Surging Flames did the deal on the Specter, which got Grim Harvest to bring it back to the land of the living. End curiosity.

Owen added Goblin Rimerunner and Phyrexian Snowcrusher to further stymie Zoz's attempt to get back into this game. Although a pair of Frozen Solids delayed the ggs, they did so only until Owen untapped, when Surging Flames nevermind the ripple slammed the door.

Owen had the - gasp, now say it with me - turn two and three Wyatt and Virgil Earp while Ben brought a Mist and Blizzard into play. The teams traded beats for a couple turns, then Zoz went aggro and dropped a pair of flyers, only one of which could be handled by Owen's tapper.

A third Outrider joined the mix, and now the Earp Brothers were together again, though Morgan got himself Frozen Solid. Nevertheless, Owen brought the elder brother in like Wyatt really could've beat Johnny Ringo and got Zoz within burn range. When Owen revealed his pistol grip of oh too many red spells yet no red mana to spend on it, he extended the hand.

The Ben Zoz defeated 2-1 Owen Turtenwald and moved to 8-0-1, with a mere five rounds between himself and the immortality that is Day Three.