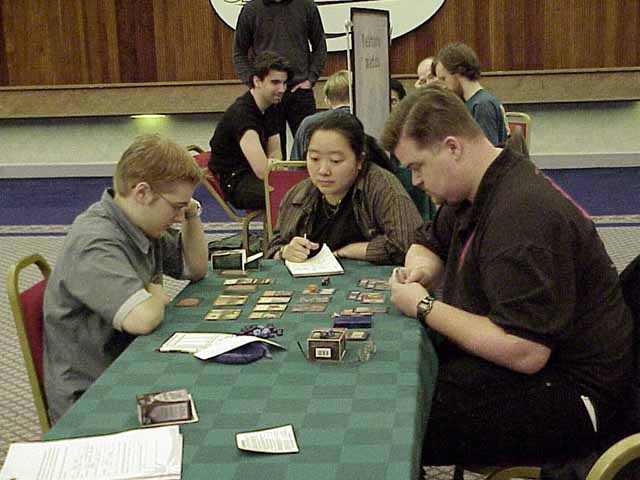 In the second round of the first draft, Darwin Kastle faced the young and talented Tom Harle from England. Darwin had a powerful black, blue and red deck, while Tom had a white and green deck with at least one basic land of each type.

Tom won the die roll and opted to draw, not play. Darwin played lands only during his first four turns, while Tom Harrowed and then dropped a turn four Sunscape Apprentice and then a Benalish Heralds. Darwin Recoiled the Heralds, and Tom had to discard, choosing a Hunting Kavu that headed to the graveyard.

Darwin then played a Faerie Squadron with kicker, but Tom cast Exotic Curse and with four basic land types in play, that was more than enough to kill the Squadron. Tom then played a Benalish Trapper.

A lot of players think that Fact or Fiction may be broken, and it is a really strong card. Darwin cast it in his sixth main phase, turning over a Phyrexian Slayer, a Kavu Runner, a Mountain, a Recoil and a Cursed Flesh. Tom thought for a while before putting the Recoil and the Cursed Flesh in one pile and the three other cards in another pile, which Darwin eventually chose, maximising his card advantage. Darwin then ended his turn, and Tom spent his turn attacking with the Trapper and the Apprentice and playing the Benalish Heralds.

The Trapper and the Heralds both died during Darwin's next turn as the American cast Tsabo's Decree, calling soldiers. Tom didn't have any more soldiers in his hand, but he had a Rampant Elephant that came into play during his following turn. Both players cast a couple of creatures; Darwin played a Kavu Runner, a Vodalian Zombie and a Vodalian Serpent with kicker while Tom played a Treefolk Healer and a Serpentine Kavu that he enchanted with an Armadillo Cloak.

With both the Healer and the Sunscape Apprentice active, Tom decided to attack with the Serpentine Kavu. But Darwin had drawn his third Recoil. So first, he blocked with his Vodalian Serpent, and after Tom had spent a mana pumping the Kavu with his Apprentice, he Recoiled the Kavu. Tom tried to re-play the Kavu, but Darwin had the Exclude and so the creature ended up in the graveyard.

Tom only had two cards in his hand at this point, and when Darwin drew Probe, he didn't hesitate to use it. "That seems to be good for me," Darwin commented when a Ghitu Fire and an Explosive Growth hit Tom's graveyard. The American then sent his creatures over, and he also played a Shivan Zombie and a Dream Thrush. Tom cast an Obsidian Acolyte, but during Darwin's next turn, he conceded to start the next game.

Tom let Darwin play first in the second game as well. Darwin cast a turn two Dream Thrush that attacked for a couple of turns. Unfortunately, it was very alone on Darwin's side of the table. Tom, on the other hand, dropped a turn two Nomadic Elf, he then Harrowed and played a turn four Angel of Mercy.

Darwin wasn't too happy about that, but he couldn't do anything but cast a Shivan Zombie. And when Tom tried to play Mourning on the Zombie, Darwin used his Recoil to return the Zombie. "Weak," Tom cheerfully commented, while Darwin sighed and noted that the board situation was far from fair. Tom then attacked with his Nomadic Elf and the Angel to bring Darwin down to eleven.

During his sixth turn, Darwin re-cast the Shivan Zombie and attacked with his Dream Thrush. The Zombie was thrown in front of the Nomadic Elf, but Tom had an Explosive Growth and saved his Elf. Tom then dropped a Charging Troll.

Darwin played a Hate Weaver and blocked the Angel and the Elf when Tom attacked, pumping the Thrush to kill the Angel. Before damage, Tom cast Saproling Symbiosis to get three Saproling tokens. Darwin managed to kill two of the Saprolings with two Cursed Flesh, but eventually he had to give in to the pressure.

Darwin got to choose whether to play or draw in the final game, and after considering it for a short while, he chose to play. He didn't do much during his first turns though, he merely played four lands. Tom got out a third turn Hunting Kavu that started attacking, and even a Probe didn't set him back much. He just discarded two lands before Harrowing to get to five lands on the table so that he could play his Angel of Mercy.

Darwin needed to find answers, so he played Opt before summoning an Ancient Kavu that just died horribly after a Ghitu Fire. The Angel and the Kavu knocked Darwin down to eleven, and a Benalish Trapper joined the crew.

Kastle had removal, but Tom simply had more threats. When the Angel was Agonizing Demised, Tom dropped a Treefolk Healer. When the Healer was Agonizing Demised as well, Tom played a Benalish Lancer. Darwin's Phyrexian Slayer was tapped down and couldn't block. In a last attempt to draw into something, Darwin Recoiled twice, but to no avail. Eventually, Tom's creatures became too much.