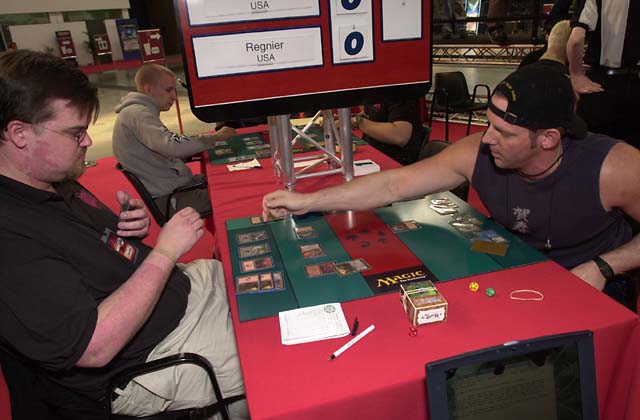 The historic rivalry between Shawn "Hammer" Regnier and Darwin Kastle has died down in recent years. Said Hammer, "I don't think we've played in a decade." Though the two are far from friends, they sat down for their match with a minimum of animosity. Back in the day, though... you had to watch out when these two titans clashed.

Hammer got his rush on with turn-one Nightscape Apprentice. He hit all three colors of mana on his third turn, but neither he nor Kastle had a play. Kastle caved on his fourth turn and laid Power Armor. Hammer thought for a moment before letting it resolve. He Recoiled it at end of turn, and Kastle put it in the graveyard.

He had another Recoil for Kastle's Phyrexian Slayer, but no pressure. Kastle discarded a mountain. Hammer finally busted a second attacker, a Vodalian Zombie. Kastle Soul Burned it for two. Hammer had no replacement.

Having been given so much time to develop, Kastle was ready to start making creatures. He cast Phyrexian Slayer and Shivan Zombie. Hammer took beats for two turns, stopping things from getting worse with a Plague Spores on Kastle's Hooded Kavu.

He finally drew a Caldera Kavu that could manhandle Kastle's Zombie. Kastle showed that he too knew the way of Plague Spores. Hammer sacrificed the targeted land to Rushing River, saving his Kavu and sending Kastle's Slayer home. Hammer replayed his Kavu on his turn.

Kastle had another Soul Burn at the ready and played another Hooded Kavu, choosing to keep his Phyrexian Slayer in hand though he had four additional mana. When Hammer went for his second Plague Spores, Kastle played the Fact or Fiction. He got Terminate and Thunderscape Familiar over Rushing River and lands.

That seemed to be the death knell for Hammer. The Slayer came back down, forcing a Void for 4 from his hand. He played his last card: A land. But Kastle seemed to have run out of gas, and Hammer topdecked Phyrexian Bloodstock, Plague Spores and Nightscape Familiar to further stabilize the ground. 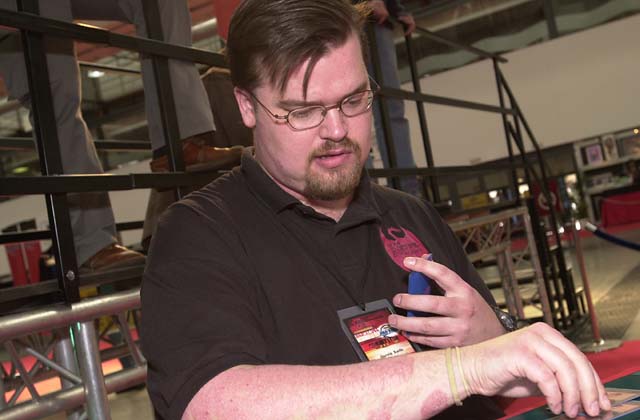 As Kastle drew for his turn, Hammer checked the life totals and asked "You're at thirteen?", to which Kastle replied "Yep, and you're dead," dropping Soul Burn on the table.

Hammer chose to draw in Game 2, loudly lamenting his lack of early creatures. He was soon under attack by Kastle's Shivan Zombie. He made a pair of Nightscape Familiars, but took four while his mana was tied up.

Things only went downhill from there. Hammer missed his fourth land drop despite running eighteen and drawing first. Kastle hit five mana effortlessly, and blew an Ancient Spring to kick up a Nightscape Battlemage and destroy Hammer's only Swamp.

Hammer failed to draw another land and started to fume. He lost his Kavu to Kastle's Soul Burn and took three successive attacks to the chops, becoming more agitated with each spell he drew. After discarding twice, he said "Here's where I draw Plague Spores!", and demonstrated his awesome psychic ability by peeling it off the top. He made sure to show Kastle. Finally he drew a Caldera Kavu he could cast. He flung it onto the table.

Kastle Backlashed it, and knocked him to 2 with his next attack. Their creatures traded in Kastle's next attack step, and a Morgue Toad from Kastle finished him a turn later. Hammer had a lot to say on the subject. He complained loudly about the way his lands had hidden from him, scouring his deck to find two seven-land clumps. Even though he was so frustrated, he still shook Kastle's hand and wished him good luck, then stomped away.

I caught up with Hammer a few minutes after he stormed from the Feature Match area. I found him desleeving his deck, and asked him what he felt about his ill fortune. 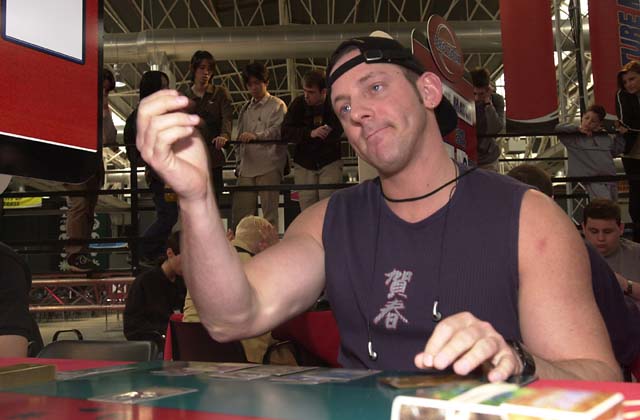 "It's either your day or it's not your day. You know, I even drew first because I wanted to get enough land, even though I'm playing eighteen. Kastle dropped land for the first six turns, and he's not running eighteen lands.

"It got to me because it was my second mana screw in a row. Like, against Hovi, okay, maybe he beats me, fine. But twice in a row! And I think my deck's way better than Darwin's. I don't know what it is. Maybe it's these sleeves. Now I've got to 5-0 for a shot at the Top 8, and I really wanted to make Top 8."

In his interview yesterday, he mentioned that his temper was one of the obstacles he'd had to overcome for his successful Day 1. I asked him how he was going to approach the rest of the tournament.

"Well, I'm gonna calm down, first of all. Then I'm gonna resleeve my deck. I hate playing without sleeves."